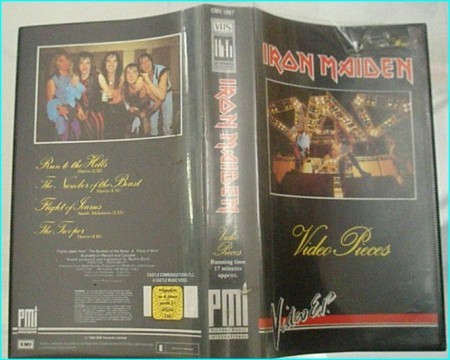 Video Pieces was a home video released in 1983 on VHS/Beta/LaserDisc/Video 8 and the Japan Only VHD format. This release contains four promotional videos by the heavy metal band Iron Maiden. This is one of the few Iron Maiden released videos to not feature Eddie the Head on the cover.

Track listing:
“Run to the Hills”
“The Number of the Beast”
“Flight of Icarus”
“The Trooper”

Iron Maidens 1983 short video compilation Video Pieces compiles four music videos: “Run to the Hills” and “The Number of the Beast” from 1982s The Number of the Beast and “Flight of Icarus” and “The Trooper” from 1983s Piece of Mind. The British heavy metal quintet was soaring creatively and commercially at this point, and the change of drummers from Clive Burr to Nicko McBrain between these two albums actually improved the bands overall sound. “Run to the Hills” and “The Number of the Beast” both have a dark, effectively grainy quality because the performance footage was shot on a stage. The former includes silly black and white footage from Buster Keatons cowboys-and-Indians movies while the latter features a dizzying blend of performance footage (complete with an appearance by famed skeleton-like band mascot Eddie), clips from old black-and-white horror movies, and tongue-in-cheek comedic bits with a dancing couple, “werewolf” and a devil. This was certainly meant to deflate the songs controversial, allegedly satanic lyrics. “Flight of Icarus” was shot largely in a recording studio and even watching vocalist Bruce Dickinson lip-synch is mesmerizing. The concept portions of it feature cloaked, blue-faced McBrain on a cliff overlooking the ocean. These scenes conjure memories of the wizard sequences in the Led Zeppelin film The Song Remains the Same. “The Trooper” is a monumental heavy metal song and the video blends stage footage with battle scenes from an uncredited, old, black-and-white version of The Charge of the Light Brigade. Apparently its not the 1936 Errol Flynn one. Two respected directors created these four videos. David Mallett directed “Run to the Hills,” “The Number of the Beast,” and “The Trooper” while Jim Yukich helmed “Flight of Icarus.” 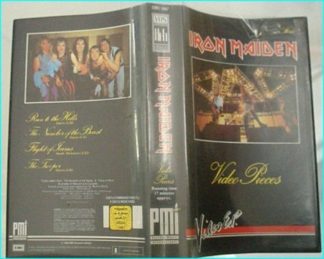