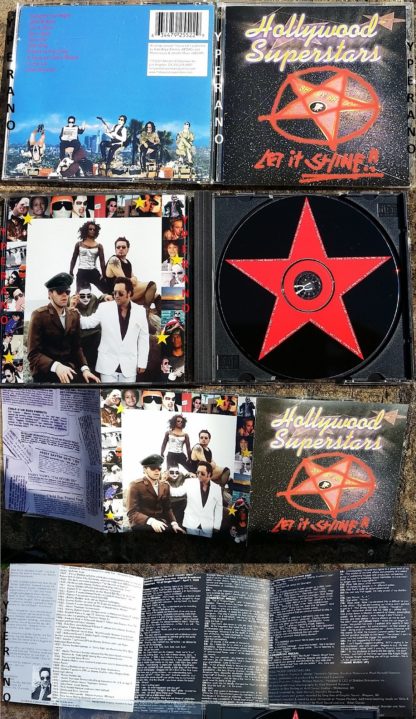 5.0 out of 5 stars Old School Attitude! Former Child Star!!!,
Shermy Sheldon, former child star, is one crazy S.O.B.! This weird, wild, hilarious CD plays like the soundtrack to Satans birthday party (and defies categories). Part old time radio show, part acid trip, Hollywood Superstars are greasy, sleazy and rip off every band you’ve ever loved (Van Halen, KISS, Black Flag, Motorhead and more)… and I say “rip off” with love. BUY IT!
——————————————————–
BETTER THAN PORN! THREE THUMBS UP!
These boys hit where it hurts, hit it again, then rub soothingly. I turned it up louder and louder until reaching the panultimate orgasmic crescendo – at which time I creamily shat my pants! Delicious fun!

amazng!
truly a work of art imitating life in hollywood. I couldn’t say enough about how much this album stuck with me for its hysterical truths and strong musicianship. overall dark humor punk.
Let it shine & I Love La. are my 2 favorite songs off this cd. Killer stuff.
Back in the day there was NOTHING better than getting gassed up and catching Shermy and the “boys” LIVE in concert! I think I lost half my teeth at their shows. But now since like half the band is dead, I guess this CD will have to do. I hope to lose half of my new teeth listening to it! So does my dentist – HEs MY DAD!
——————————————————–
Shermy Sheldon, former child star of NBCs Harlem Huffington, has shot and snorted his way back into the limelight. His Hollywood Superstars are a furious old-school punk metal attack on the establishment that kicked him off his rightful place on the sitcom dial. PARENTAL ADVISORY this album is banned in Missisippi.
——————————————————–
I Can Not Tell A Lie!!!
This album ROCKS!
This guys are crazy. I saw them play at a club in LA and it was lots of fun although I didn’t care much for the opening act.
Let It Shine is a bitter, brash, boisterous blast! Twisted, seriously refreshing CD. A standout in an industry of mediocre twits! Influences ranging from Sex Pistols to Black Flag to Van Halen to Rage Against the Machine…
——————————————————–
Buy It For The Music, Love It For The Weirdness!!!!
If you are a fan of Zappa, Ween, MC5, Black Flag, KISS, Marilyn Manson, Turbonegro, or CKY … Then this CD is right up your alley! Great old skool hardcore, and metal mixed with some serious LSD damage! These guys are WAY OUT THERE! A must have for any keg party! The anthems! The anthems to idiocy!
——————————————————–
Former TV child star rages against the system that abandoned him.
Former TV child stars have it rough. Most slip into obscurity, but this ones not going down without a fight. Remember TVs Harlem Huffington? Little Shermy Sheldon was on the cover of TV Guide for nine weeks straight back in the day, but now hes as pissed off as the Incredible Hulk with hemorrhoids. An embarrassment to the Hollywood scene, his onstage drunken rages have landed him in jail, but they make for an interesting listen! His lyrics rant against being screwed by the networks. His band slams out some hardcore punk metal. You get the feeling this CD is probably the last thing hell do before he dies of an overdose. Get it.
——————————————————–
Old School Spirit
I just got this CD and it kicks serious ass. All the best of the old school, don’t give a “f” attitude (The Damned, Dead Boys, New York Dolls, Iggy Pop – and yes, even a little Motorhead). Right on, Superstars. Let it shine.
——————————————————–
I’M WRITING CONGRESS!
Recently my 19 year old purchased this CD from your website. When he shared it with me, I nearly fainted. These guttermouthed, irresponsible, sex fiends are exactly what is wrong with America today. I immediately disposed of my 19 year olds copy, and proceeded to give him the spanking of his life.
——————————————————–
I am so wet
I can’t stop listening to “Let It Shine.” Never before has music made me feel this way, as a matter of fact never before have I been touched as this masterpiece of a CD touches me. I feel like a new part of me has awoken. I scream as Captain Ts riffs vibrate my soul, I cum to the sound of Brackishs snare and the padder Wyrds little feet make my honey drip. PLEASE GOD say it is true and Shermy – Let It Shine ALL NIGHT LONG.
——————————————————–
these guys have some lovin equiptment!!
My balls hurt from listening to this reccord!! Its better than beer farts and whole wheat bread. My favorite part is when the butcher loses control! Fuck Yeah!!
——————————————————–
A Bizzare “Must Have!”
I’ve read alot about these guys and decide to check them out. And I must say, I’m damn glad I did! Let It Shine is a hilarious, kick ass and dare I say “genius” concept album. Contagious!
——————————————————–
the critters love these songs!
I own a private pet store establishment in Flat Mesa, NM. I was having trouble with the animals in my store – they had stopped eating, drinking and feeling “friendly.” A friend of mine recommended I play “LET IT SHINE” in my store to help the animals feel more like themselves. Well, after a complete day of constant hard listening – sure enough – the critters began to act alive again! I was so happy I bought 24 more copies – one to commemorate each hour of the day it took to save my precious little babies. Thank you Hollywood Superstars – you really saved my ass – I mean OUR asses. 🙂
——————————————————–
As a former member of the LAPD, I’ve personally arrested Shermy Sheldon a half dozen times. Its great to see him rocking so hard after so much hard time! I love the song COP KING! Its funny because its true! Hang Loose Shermy!
——————————————————–
Love Songs, Nothing but LOVE songs!
If you love drinking heavily, you’ll REALLY love Let It Shine! This CD kicks butt! It Gets me OFF!
——————————————————–
What do Nelly, Nelly Furtado, and Nelly Olsen have in common?
They all worship the Hollywood Superstars!
A rockin’ good time!!!
——————————————————–
BETTER THAN PORN! THREE THUMBS UP!
These boys hit where it hurts, hit it again, then rub soothingly. I turned it up louder and louder until reaching the penultimate orgasmic crescendo – at which time I creamily shat my pants! Delicious fun! 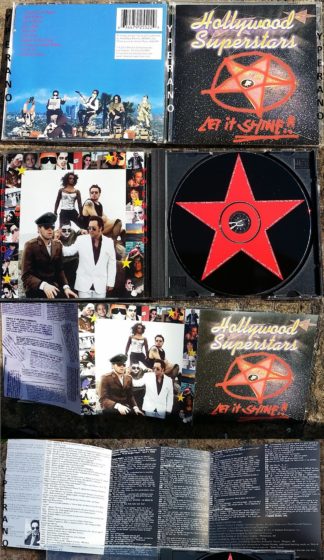