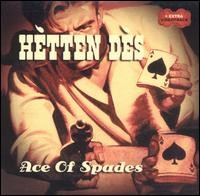 HETTEN DES: Cowboys con Cojones CD
Promo disc with press release. Belgian band, who like to describe their style as power-country. The groupname is local Dutch for something that means “”Heavy, don’t you think so”” or “”Can you dig it””.It’s hard to define their music, it ain’t no psychobilly, it ain’t no rockabilly, it ain’t no cowpunk, it got something of all three, but basically all songs are country-inspired. Some songs more heading in the country-direction, others heading to heavy rock’n’roll and rockabilly, and some with a true old school psychobilly sound. In January 2005 they recorded their debut album “”Cowboys Con Cojones”” on our Drunkabilly Label. Besides some self penned originals, you can also hear some covers from legends like Mike Ness, Hank Williams Sr., Neil Diamond and Johnny Cash. Also Motorhead’s “”Ace Of Spades”” got the Hetten Des treatment, and came out as a boppin’ country track. This song was also released on a limited CD-single. The single is sold out by now.”