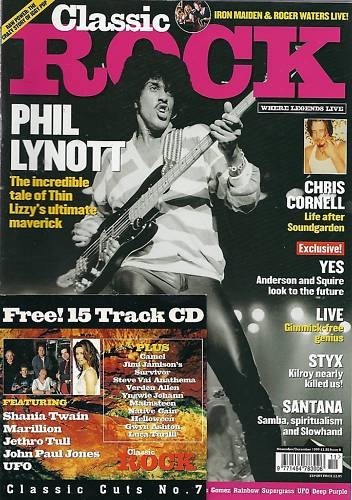 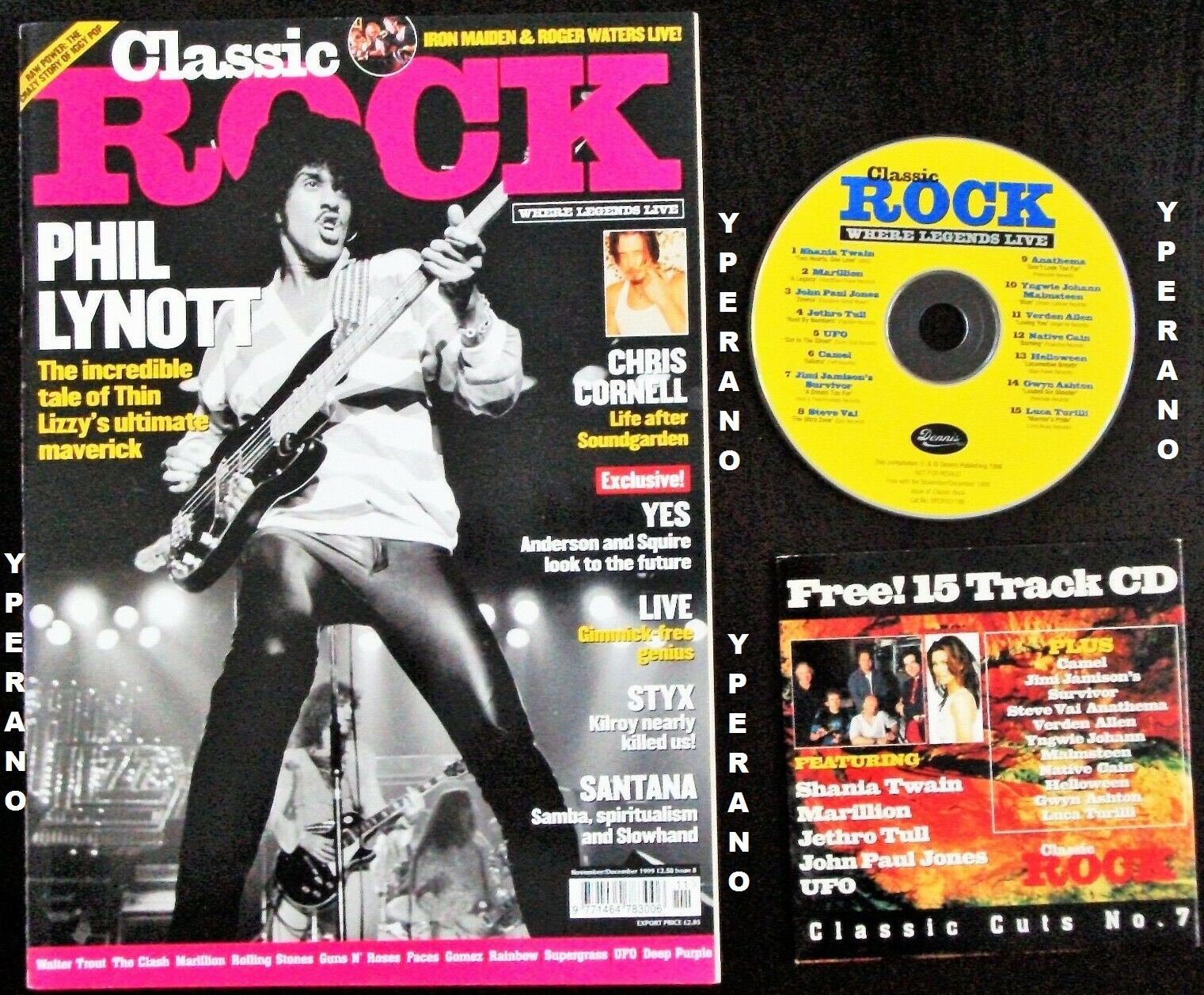 From the album ‘On The Way’ (NMC) Since Classic Rock featured Shania back in Issue One, the whole damn planet has become obsessed with her. ‘Two Hearts…’, a demo produced a decade ago by Paul Sabu (the melodic rock guru with whom she was having a relationship at the time), reminds us why we fell in love with her in the first place.

From the album Inarillion.com’ (Raw Power) Just one of the many standout tracks from Marillions longawaited latest album, reviewed glowingly on page 78. Correctly described there as “direct and punchy” and featuring “a Bondlike anthem”. ‘A Legacy’ is proof of the bands reluctance to rest on their laurels regardless of how long their songs are. Good work, Marilli-lads. Take a house point.

From the album `Zooma’ (Discipline Global Music) Awarded four stars last issue, the instrumental ‘Zooma’ is the solo debut proper from ‘the quiet one’ in Led Zeppelin which is kinda strange considering its taken him twenty years to get around to it. Virtuosity and creativity are JPJs watchwords. Listen and believe.

From the album 1-Tull Dot Com’ (Papillion) Its been way too long since we heard anything of note from that much-loved, one-legged British institution, Jethro Tull. Their first album since ’95s ‘Roots To Branches’. ‘J-Tull Dot Com’ packs a heftier kick than many would imagine, yet also features all the flute and rustic acoustic guitar flourishes that have become established as the groups trademark. Don’t miss it.

From the album ‘Werewolves Of London’ (Zoom Club) In typical UFO fashion, ‘Werewolves…’ was in fact recorded in Wolverhampton, but we’ll let it go just this once. Featuring four-fifths of their classic line-up (ex-Dio drummer Simon Wright replacing Andy ‘No Neck’ Parker), UFO turned in a set of biting melodic power. One can only hope that the rumours which predict a new studio album with Michael Schenker are true.

From the album Rajaz’ (Camel Productions) Some might say that Camel the band have been around for nearly as long as the hump-backed desert-dwelling beast after which they were named. That is their prerogative. The fact remains that when it comes to jazz-flavoured rock, nobody does it better than guitarist/vocalist/ keyboard player/flautist Andy Latimer and his chosen colleagues of the moment. ‘Rajaz’ (see page 71) is a fine. Arabicflavoured body of work that comes highly recommended.

From the album ‘Empires’ (Frontiers/Now 6 Then)
A warm welcome back to Survivor, a long-absent and much-loved pillar of the melodic rock community. Jamison is in fine voice on ‘Empires’ (reviewed on page 78), and his new songs sound inspired. Now all we need are some gigs.

From the album ‘The Ultra Zone’ (Epic)
Alas, our copy of ‘…Zone’ arrived too late to provide a critique in this issue, but the title track gives an indication of Mr Vais current headspace. “An intriguing mix of sounds and influences that creates lush instrumentals and mellow vocal tracks”, is how Steve describes it. ‘Nuff said.

From the album ‘Judgement’ (Music For Nations)
When reviewed back in Issue Six, our man was aghast. Expecting a bunch of thrash metal donuts, he was pleasantly relieved to discover a group influenced by both Paradise Lost and Pink Floyd, and who experimented with moody keyboards and cool acoustic moments. Doubtless you’ll feel the same.

From the album ‘Concerto For Electric Guitar And Orchestra’ (Dream Catcher)
Three years in the making, this project with the Czech Philharmonic Orchestra is something that Malmsteen has been threatening for some time, having fused his guitar style with classical nuances. Of course, not everybody will enjoy this, but you’ll be able hear the love and care involved in its creation.

From the album ‘For Each Other’ (Angel Air)
Best known as the keyboard player with Mott The Hoople, Allen worked long and had on this solo release, spending seven months completing it; playing the bulk of the instruments and handling the vocals himself. Definitely what you would call a labour of love.

From the album ‘The Primitive Soul’ (ProActive)
Rising from the ashes of Pride, Native Cain hail from the Midlands and will no doubt be well chuffed with the review of ‘The Primitive Soul’ that appears on page 70. Star of the band is the unsuitably named Lee Small, a vocalist with a big voice that sounds like the bastard offspring of Glenn Hughes and Diamond Heads Sean Harris.

From the album ‘Metal Jukebox’ (Raw Power)
With ‘Metal Jukebox’, Helloween have paid the ultimate compliment to long-time heroes like David Bowie, Cream, The Beatles, Focus, Abba, Faith No More and even countrymen the Scorpions by covering their material. All those who did not know that the original version of ‘Locomotive Breath’ was by Jethro Tull should take one step backwards.

From the album ‘Feel The Heat’ (Riverside Records)
Having supported Rory Gallagher early in his career, Welsh-born blues guitarist Ashton is now being compared to his hero due to rave reviews of the ‘Feel The Heat’ album. ‘Loaded Six Shooter’ is among Ashtons rockiest moments, but the question remains are these Rory references justifiable? Listen and make up your own mind.

From the album ‘King Of The Nordic Twilight’ (Limb Music)
The name of Luca Turilli may not be familiar to everyone, but fans of symphonic metal will have come across Italian maestros Rhapsody. Turilli is guitarist with the aforementioned band. But, taking a break from his day job, Turilli has recorded his debut solo album. And while there are elements of Rhapsodys sound, he also has taken the opportunity to delve into other musical areas. 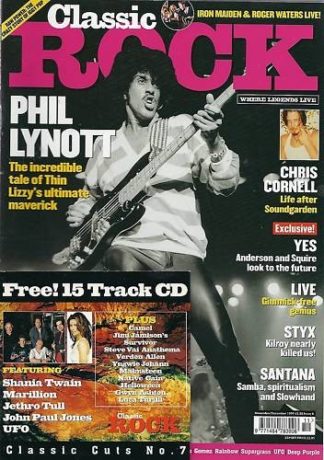