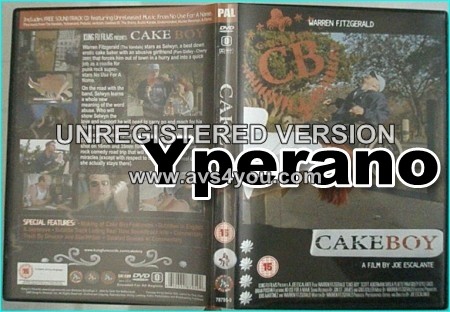 Cake Boy DVD a film by Joe Escalante (bassist of The Vandals). Released by Kung Fu Records. Check the Trailer!

Look out Iron Chef, here comes CAKE BOY!!! His tribulations and triumphs are depicted in this highly anticipated DVD feature film
Directed by Joe Escalante (bassist of The Vandals and producer of That Darn Punk and Fear of a Punk Planet), written and starring Warren Fitzgerald (guitarist of The Vandals) and shot on 16mm and 36mm film, CAKE BOY is a punk rock comedy road trip that will make you believe in miracles (except with respect to the girl in the wheelchair, she actually stays there).

As Joe explains, I wanted to make movies the way punk records were made when I first started in the music business, D.I.Y. When I saw ˜Napoleon Dynamite, however, I realized there might be an audience for a quirky film like this beyond the fans of the punk rock music in it.

CAKE BOY was shot on nights and weekends, without a crew. The editing consumed me for a year, says Joe. I learned how to shoot from Jeff Richardson, the director of ˜That Darn Punk.â I taught myself to edit so I could finish that film (he got sick of it) and save our label some money on music videos, then I went straight into CAKE BOY. It was formerly entitled ˜Selwyn’s Nuts.â It took over two years to shoot, because along the way I had to make stuff that made money, so I made about 15 or so concert DVDs that paid the bills. The final budget of the film came in at just under $30,000.

On the road with the band, Selwyn learns a whole new meaning of the word abuse and eventually gets unceremoniously dumped in the middle of nowhere without his shoes. Encouraged by his hot new handicapped girlfriend (Sheila Platte), Selwyn goes for the baking gold in an Iron Chef style showdown with the Master Baker of France, Pierre Kiniche.

We could have loaded this thing up with big Hollywood cameos, says Joe, because we definitely have the connections, but that is an angle I am uncomfortable with. Warren wrote some parts for some of his friends like Brian Posehn and Kyle Gass. After they started talking about the film, people like Bob Odenkirk and Patton Oswalt were actually asking to be in the film. We didn’t seek that out. People heard it was fun and they wanted to be a part of it. All the people in the film are somehow or another connected with the Vandals in some way. Stan Freese, who plays Carl Betting, is our drummerâs dad. He’s a good actor. He’s been on ˜Hee Hawâ for Christ’s sake!

To shoot someone like Bob Odenkirk, he continues, I try to make it as easy as possible. I shot it in the parking lot of the Sunset Gower Studios where he has an office. It was a car scene and that’s where his car was anyway. He had a blast. He couldn’t get over how ghetto our operation was. He loved it. That’s where shooting on film made a difference. He knew how hard that was in relation to tape, so he had respect for us. We weren’t just aiming a camcorder at him.

Extra features on the DVD include a Making of Cake Boy featurette, subtitles in English and Japanese, deleted scenes (with commentary) and a commentary track by Joe Escalante and Warren Fitzgerald.

Joeâs inspiration behind CAKE BOY comes from the groundbreaking work of the late Morris Engel, who passed away March 5. His pivotal 1953 film Little Fugitive won the Silver Lion at the Venice International Film Festival, was nominated for an Academy Award for Best Screenplay and in 1997 was included in the National Film Registry by the Library of Congress. The film foreshadowed the French New Wave and independent filmmaking by such directors as Quentin Tarantino.

My favorite movie of all time is a Morris Engel film called ˜The Little Fugitive,â says Joe. This is the kind of movie Iâve always wanted to make. I have since learned that Engel inspired the French New Wave era of films, but I didn’t know that at the time. I only knew that you could tell this movie was a labor of love and he didn’t care about Hollywood or anything like that. The guy and his wife just had a story to tell so they started shooting. By listening to the commentary track on the laser disc for ˜El Mariachiâ and reading a filmmaking book by Robert Rodriguez, I had a feeling I could do this, so I did it.

More films are on the horizon for Warren and Joe. Warren has written 3 or 4 other scripts that are really good, Joe proudly proclaims, and I have an agent that has attached me as a director to a couple other scripts he is shopping around. Two of them are bullfight films. That would be cool, but mostly I hope my next film involves a real schedule instead of this nights and weekends thing. I could probably get used to having a crew as well.

Be the first to review “Cake Boy DVD a film by Joe Escalante (bassist of The Vandals). Released by Kung Fu Records. Check the Trailer!” Cancel reply 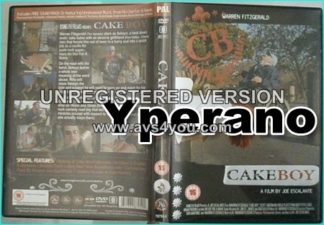 You're viewing: Cake Boy DVD a film by Joe Escalante (bassist of The Vandals). Released by Kung Fu Records. Check the Trailer! £4.50
Add to basket