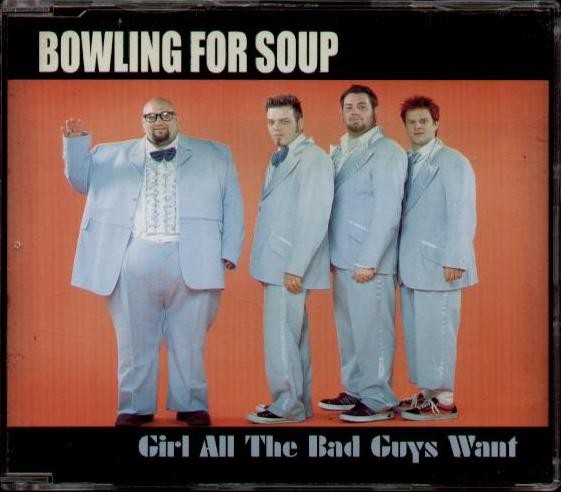 BOWLING FOR SOUP: Girl all the bad guys want CD. incl. OTHER GIRLS and the video (CHECK VIDEO)

CLIP: “Girl All the Bad Guys Want” is a hit single by Texas band Bowling for Soup, from their 2002 album, Drunk Enough to Dance. The song reached #8 on the UK Singles Chart and #64 on the US Hot 100, and was nominated for a 2003 Grammy Award for “Best Pop Performance by a Group or Duo”. “Girl All the Bad Guys Want” came after a dry spell for the band and was followed by the popular album A Hangover You Don’t Deserve, leading frontman Jaret Reddick to refer to it as “the career-saving song” on MTV. The song was written by Butch Walker (formerly of Marvelous 3), who has also written songs for Avril Lavigne and SR-71. Music video The music video featured the band in various spoofs of other bands videos, such as Staind’s “It’s Been Awhile” and Limp Bizkit’s “Break Stuff”, both of which were directed by Fred Durst. Three guys dressed as Corey Taylor, Joey Jordison and Shawn Crahan from Slipknot make appearances at the end of the video, where they knock out Reddick dressed as Durst, a reference to the feud between Slipknot and Limp Bizkit. Chris also dresses in a parody of Wes Borland’s unconventional stage attire and makeup. The girl at the beginning of the video is played by Lindy Christopher. Chart 2002 peak position UK Singles Chart 8 US Billboard Hot 100 64 US Billboard Mainstream Top 40 17 US Billboard Modern Rock Tracks[ 38 US Billboard Adult Top 40 39″

Be the first to review “BOWLING FOR SOUP: Girl all the bad guys want CD. incl. OTHER GIRLS and the video (CHECK VIDEO)” Cancel reply 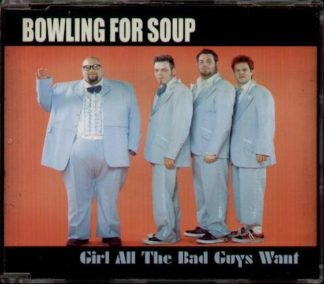 You're viewing: BOWLING FOR SOUP: Girl all the bad guys want CD. incl. OTHER GIRLS and the video (CHECK VIDEO) £1.99
Add to basket