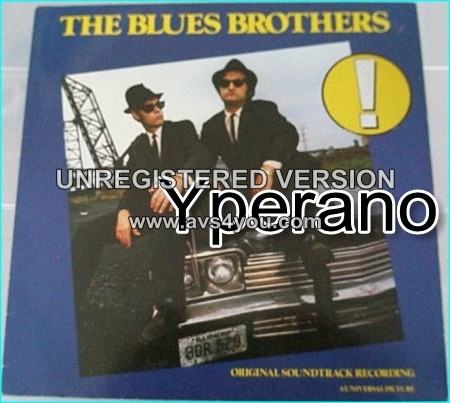 Inspired by the lovable Saturday Night Live white-boy blues schtick of Dan Aykroyd and John Belushi, director John Landis seemingly threw every harebrained stunt he could imagine–and millions of dollars in production costs and wrecked autos–onto the screen. The resulting film could have been mistaken for a bad case of Hunter S Thompsons DTs, but Landis never shortchanged the music: Cab Calloway, James Brown, Aretha Franklin, and Ray Charles all get their moment in the spotlight. Miraculously, the chic-shabby Blues Brothers, anchored by the Stax rhythm section of Cropper and Dunn, hold their own against the legends, perhaps by the sheer joy and love they have for the music.
—————————————————
A film that stands up to repeated viewing is complemented by an album that has the same effect. The musical stars make cameos to perform one track each, Aretha as the waitress in a diner tears into ‘Think’ while Cab Calloway dons his best white suit for a spectacular ‘Minnie The Moocher’. The ‘brothers’ are supported by most of Booker T. And The MGs and they deliver some rousing numbers including a bottle-throwing ‘Rawhide’ and a loose ‘Gimme Some Lovin”. Aykroyd and Belushi could have become the Sam And Dave of the 80s.

5.0 out of 5 stars Yowza!,
This is what musics all about – a gustsy band delivering classic blues/soul, aided and abetted by some of the living legends that made it all possible – and a reminder of a fine film into the bargain.
Cover versions are always dangerous in the wrong hands, but here the debt to the originals is acknowledged, and arrangements show how to score a hit second time around. You thought Duane Eddys version of Peter Gunn was nigh on perfect? Try the growling horns here for size!
When you’ve got the likes of James Brown, Aretha Franklin and Ray Charles batting on your side, how can you go wrong? I could wax lyrical about all these tracks, but a special mention must go to Arethas classic Think; listen to the soaring voice – thats how to do it, girl! Soul lives.
—————————————————
5.0 out of 5 stars As good as the film!,
Musicals aren’t my thing, jazz/blues style music certainly isn’t either but that didn’t stop me loving the Blues Brothers film and after seeing that a few times how could I resist the soundtrack. The songs are the same as those in the film (sometimes you get these kind of soundtracks where they have originals rather than the ones in the film) and sound just as good. At the risk of stating the obvious, if you liked the soundtrack in the film, you won’t be wasting your money on this!
———————————————–
5.0 out of 5 stars Awesome Fun,
I’d like to start this review by saying that I am an 18 year old, whos main musical interests lie in rock, heavy metal and punk.
However, after a friend got me watching the film, I found myself astounded by the amazingly un-natural cool this music can have.
In the film itself the music fits right into place, with star performances from such talent as Aretha Franklin and James Brown.

Having loved the film I got the soundtrack and was not disappointed. This is some of the funkiest, FUNNEST music I’ve heard in a long time. Whilst rock n’ roll provides danger and aggressiveness, this music provides class, style, fun and, dare I say it, magic.
Love it to bits. (Plus theme from Rawhide is totally amazing!)