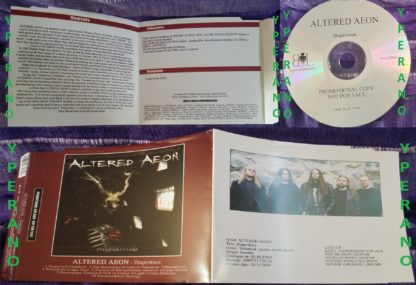 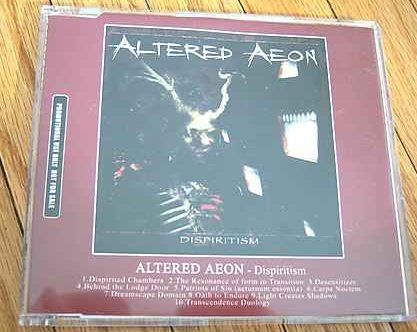 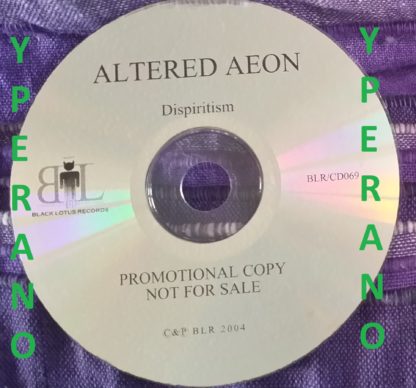 Altered Aeon is one of those bands who perhaps came along at the wrong time to get noticed by an audience that would appreciate them. Dispiritism was released by the now-defunct Black Lotus Records label, which had been around for a few years but was a little “late to the party” as the smaller music stores were already disappearing. With so many otherwise unknown bands now putting out albums on a whim, Altered Aeon must have simply been overlooked, because I rarely if ever run into anyone who has EVER heard of them. Although bands such as Theory in Practice and Scar Symmetry may not be household names, therein lies Altered Aeon’s past and future, as well as references for comparison. Dispiritism is technical without being distracting, progressive without getting boring, and aggressive without ever sounding generic. The vocals, primarily sung rather than growled, never stray into the over-the-top, polished style so common among melodic metal in the past few years. Nevermore might be an appropriate comparison in terms of vocals.

The guitar playing takes the riffing style of Scandinavian melodic death metal and injects some incredible solos and structural “surprises” that call to mind early Soilwork. The drumming is flawless, generally intense but not too busy. There are some interesting bass parts, but they are often buried in the mix, which is unfortunate considering that anyone playing in this “league” is not going to be a slouch at the instrument. For a band on a virtually unknown label, the overall production is outstanding.

Lineup changes and the demise of Black Lotus Records apparently stalled Altered Aeon’s ascent.   Dispiritism will presumably be the band’s only release, so do yourself a favor and pick it up!

Finally! The New Messiahs of Thrash have risen! – 95%

Sure, there have still been some very good Thrash releases in the last 15 years, but none of those bands were really new to the scene. Whenever, for instance, OverKill, Exodus or Testament releases an album, I just know its something to look forward to, but something new and good is something that can hardly be found in the Thrash scene…

Wait! Look no further! It can be found in Sweden! If Altered Aeon is able to keep up the mindblowing level of their debut album ‘Dispiritism’, we have found ourselves the new messiahs of Thrash Metal!

Altered Aeon was formed as Thrawn by drummer Henrik Olsson (Theory In Practice) and singer Kjell Andersson (Azotic Reign). Olsson presented a couple of ideas to Andersson, which, apparently, they liked so much that they decided to work out the ideas for a new band. With guitarists Niklas Rehn and Per Nilsson in the band, they recorded a demo (still under the name Thrawn) in 2003. Bassist Anders Hedlund entered the band later and they went on as Altered Aeon to release ‘Dispiritism’ in 2004.

Upon hearing the album for the first time, it left me behind thinking only two words: “HOLY SHIT!!!”. This album has everything a 21st century Thrash Metal album needs! The guitar riffs are totally crushing, as is the guitar sound, the vocals are amazing, very raw and powerful without turning to Death Metal vocals and nice and clean at times. On top of that, Henrik Olsson does his best job hes ever done on this album and Per Nilsson adds some perfect, Marty Friedman-ish solos to the whole thing.

When the album opens up, ‘Dispirited Chambers’ sums it up very well; after years of biting through all these Machine Head-wannabes and all these weak Gothenburg bands, there is finally a new Thrash band that actually succeeds in giving me a good kick in the head and leaving me bleeding with a smile on my face. The opening riffs to ‘Dispirited Chambers’ are the most amazing Thrash Riffs since OverKills ‘Horrorscope’ record and there is so much happening within the song, even though its only 3:44 long. In the middle of the song, the song slows down and Kjell Andersson does some nice clean vocals, followed by an amazing guitar solo. This is definitely the best Thrash anthem since ‘Coma’!

But there are lots of bands that have a great opening track, but lack in making the rest of the album interesting. Is that the case with Altered Aeon? HELL NO! ‘The Resonance Of Form In Transition’ follows the technical Thrash standards set in the opening track quite well. There is a strange break in the middle (there is a key change and a heavy tempo change) I had to get used to in the beginning, but once I did, this album was already two out of two after not even ten minutes of playing time. The riff after the solo in the slow section with the incorporated drumming are among the most amazing on the album, even though its hard to pick a best moment from a near perfect album.

‘Desensitizer’ follows and theres still no sign of deterioration. The teasing intro riff full of breaks (I think the Theory In Practice resemblance is the biggest here, even though it sounds nothing like Theory In Practice) keeps on returning and again, there are lots and lots of changes to be found in the song, which in the end turns into total chaos. Gotta love it!

‘Behind The Lodge Door’ starts out with riffing that would have Jon Schaffer shit his pants. Once again, the guitar riffs totally stand out. There are a lots of nice time feel changes as well and the chorus of the song is incredibly catchy. A great song to bang your head to.

Even greater to bang your head to is ‘Patriots Of Sin (Aeturnum Essentia)’. The all-on Thrash fest has really begun now! ‘Patriots…’ is probably the fastest track on the album and it kills from beginning to end. Once again, the drumming is stellar on this track. As much as I despise blastbeats, they’re present here a few times and they’re not disturbing at all. Apparently, Olsson masters the art of only using things when necessary!

‘Carpe Noctem’ starts out with a nice traditional Thrash riff, something to song is actually full of! There are some really cool double vocal lines present and there are some heavily pulsating riffs in the song that just invite you to mosh to them!

Beautiful chaos is something that definitely refers to the beginning of ‘Dreamscape Domain’. Kjell Andersson really shows himself in his best form on this song. There is some nice twin riffing as well. I’m kind of running out of superlatives and I don’t want to use the same ones on every song, but once again, theres a song that deserves them.

‘Oath To Endure’ once again totally kicks you in the face from beginning to end. Before I point out Anderssons great vocals again, here is a message to all grunters in this world: listen to this guy and learn to sing like him, damnit! Once again, hes done an amazing job and there are some great double vocal lines to be heard in the song.

‘Light Creates Shadows’ has another strange break, just like ‘The Resonance Of Form In Transition’ had. This time, its only bass drums and vocals and it comes as a total surprise again. But then again, Henrik Olsson is a total genius when it comes to unexpected breaks. Later on, the song also has a really, really cool bass solo, afer, once again, a majestic guitar solo.

Closing off the album is one of my favorite tracks, ‘Transcendence Duology’. The intro sounds a bit like Nevermore, without sounding like a copy of Nevermore, it just slightly reminded me of the intro to ‘Next In Line’. This intro builds up the tension a little better than the Nevermore-song though. The total Thrash verse once again follows very unexpectedly. I think its brilliant to still come up with something unexpected after so many years of Metal history. Like ‘Dispirited Chambers’ did as well, ‘Transcendence Duology’ sums up what the album is about quite nicely; its a brilliantly crafted song, containing many, many brilliant riffs, great vocals, nice breaks and shifts in the song and of course a mindblowing guitar solo. This time its Marty Friedman who shits his pants!

So far the album has been totally 100%, Henrik Olsson (who wrote just about all the music and lyrics on the album, there’s been very little help from other members) did a perfect job, if he succeeds in writing another album like this, he is definitely the Thrash God of the 21st century. Theres just two bonus tracks after that and they are kind of pointless. The Per Nilsson-penned instrumental ‘Cellular Disorganization’ is not bad at all, it just sounds a little out of place on the album. The other bonus track is the King Diamond cover ‘Welcome Home’ and even though they do a great rendition of it (the amazing music is performed really well by the band and King Diamonds vocals are finally replaced by a guy who actually knows how to sing), I never really understood the point of releasing cover songs.

The whole thing has also gotten the perfect sound from the hands of Jonas Kjellgren (who plays in Scar Symmetry with Olsson and Nilsson as well) and that adds an extra depth to an album which was totally amazing anyway.

So here’s what you’ll get: the perfect Thrash album. I’ve fooled myself for long enough, making myself believe that perfection doesn’t exist. Bullshit, perfection is in my CD player right now! After Pathos’ killer ‘Katharsis’-album, this is the second very pleasant surprise from Sweden in the new century and guess what…? This one is even better! Maybe that is a line which will be continued with the next Altered Aeon album? Hopefully! 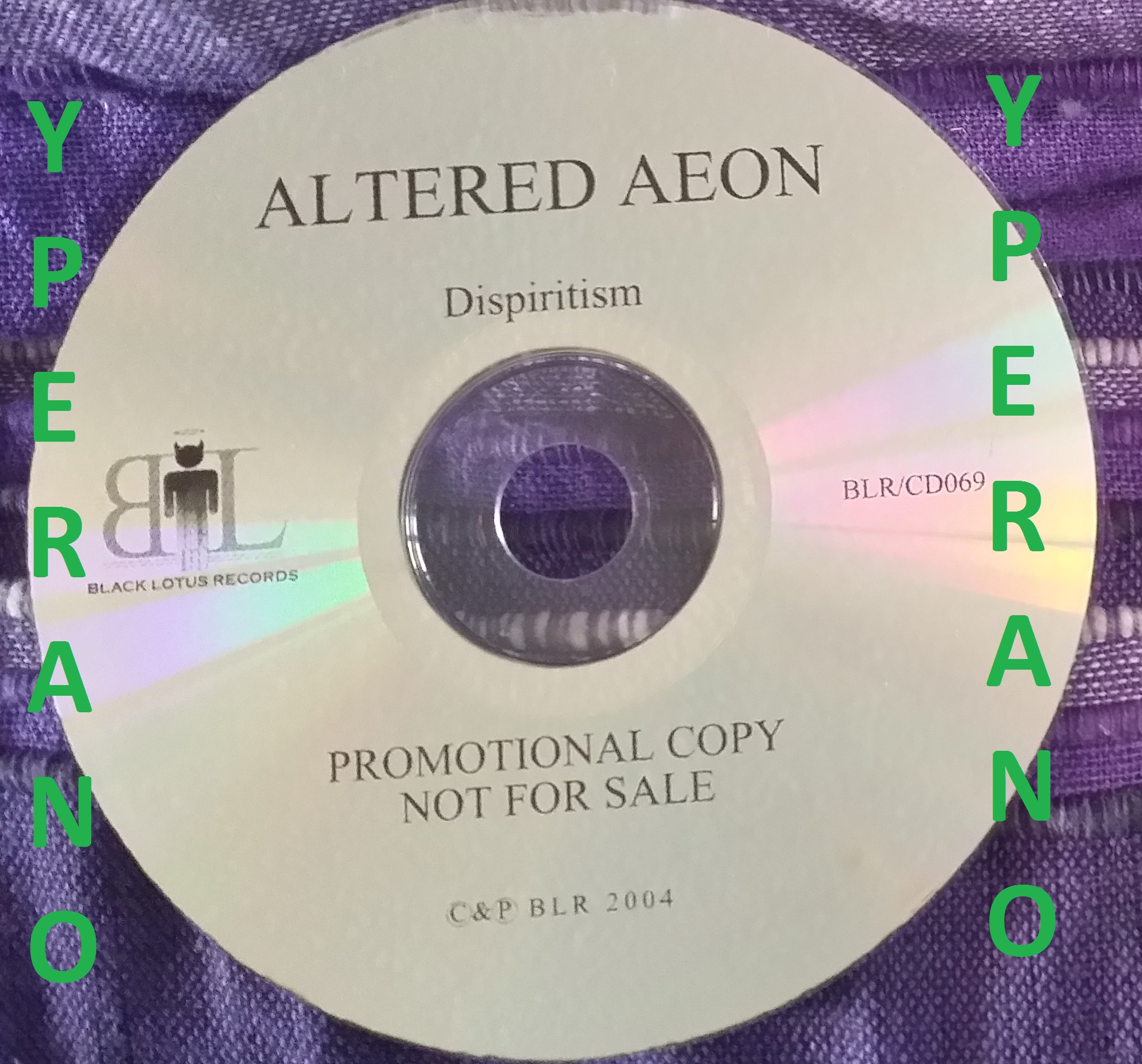 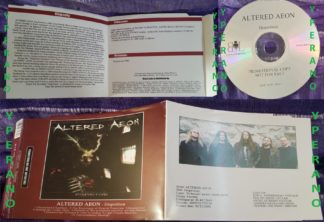