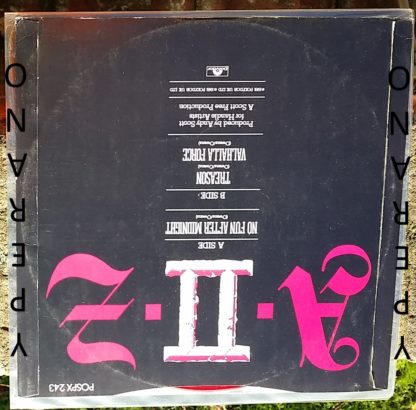 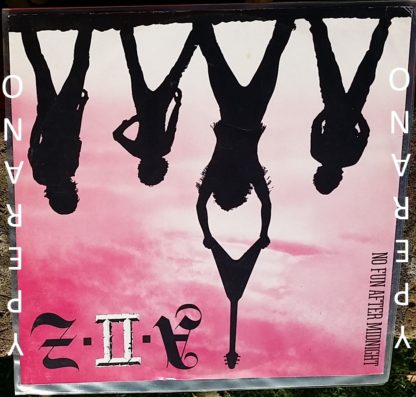 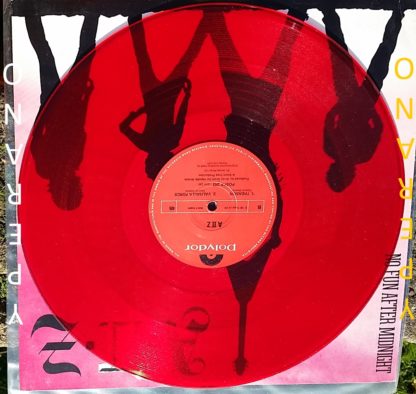 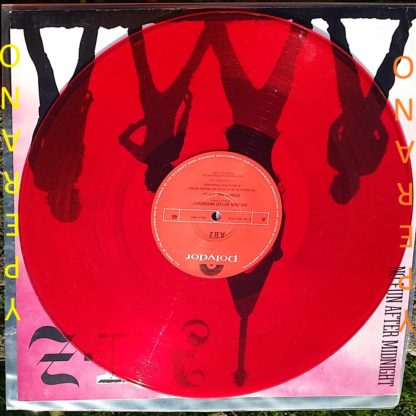 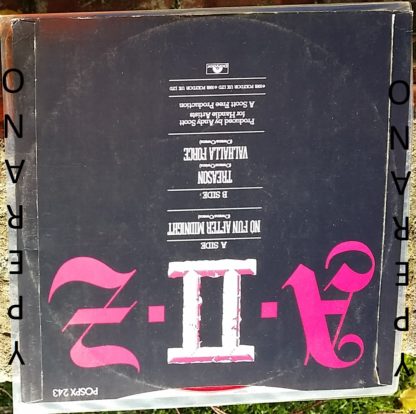 RARE N.W.O.B.H.M. Red Vinyl. Watch out for “”Treason”” that made it into the N.W.O.B.H.M compilation that Lars Ulrich has created and “”Valhalla force””

Manchester A II Z (named after street-finder atlases) were the beneficiaries of fortuitous timing, being formed by brothers Dave (vocals) and Gary Owens (guitar), Cam Campbell (bass), and Karl Reti (drums), just in time (late 1979) to be swept up by the initial, deafening hubbub surrounding the New Wave of British Heavy Metal. Immediately signed by major label Polydor, the group, whose style bore resemblances to Motorhead, Sweet Savage and Weapon, recorded their 1980 debut album named The Witch of Berkeley, live at a hometown gig (actually the hall of Hazel Grove High School), then were sent out on the road in support of Girlschool and Black Sabbath. Neither of these experiences aided record sales, however, and following releases for Polydor 1981 “No Fun After Midnight” EP and “”I’m the One Who Loves You””, were dropped. Internal dissension had also taken root by this time and the Owens had in fact dispensed with their original rhythm section to work with new bassist Tony Backhouse and drummer Simon Wright (future AC/DC) on that final single. But the quartet new and more commercial AOR direction failed to bear fruit and by the middle of 1982, A II Z dissolved. Guitarist Gary Owens joined the similarly ill-fated NWOBHM band Tytan.

A II Z are a better known NWOBHM act despite the fact that they were quite short lived. What we have here is mid paced – fast rocking NWOBHM, which is what this music is really about. The very best NWOBHM in my humble opinion. I very much like the riff endings, they have a Deep Purple like feel to them, a bluesy touch reminding the hard rock era in which they grew up. The solos are pretty damn good in each song and one has to admire the guitar work. They remind me of the dynamic solos of Persian Risk in their 1981 “calling for you” single. The vocals are great, powerful and melodic, depending on the music. A great performance from all the band members. Production wise, everything sounds as it is supposed to be, completely natural.

The record kicks off with no fun after midnight, my personal favorite. The opening riff reminds strongly Motorhead’s no class. Ballsy attitude, great riffs and solo. Classic NWOBHM. Treason is the second song on the record and has a pretty catchy opening riff and a great chorus. The verses are melodic at least. It also has a great ending, the last 23 seconds are so powerful. Again one must admire the musicianship of the lead guitarist Gary Owens. Valhalla force is the last song and it’s very cheerful I could say. The best part of it is the solo and it’s the weakest song on the EP.

These guys went on to change their name and form Aurora which was also a very short lived band. They had some support and fans back then. One is for sure, the lads could play some great music. The soloing of Gary Owens is exceptional, beautiful licks throughout each song, great riffing too. Vocals are pretty good, and as far as I have heard they were great at gigs too. It’s a freaking shame they had to stop, we could use more of that energetic NWOBHM they delivered back then.