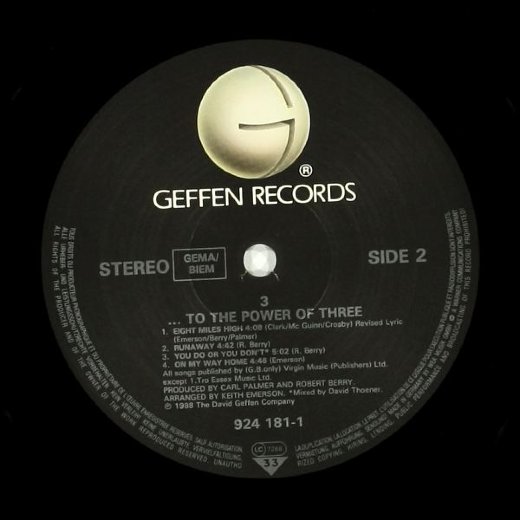 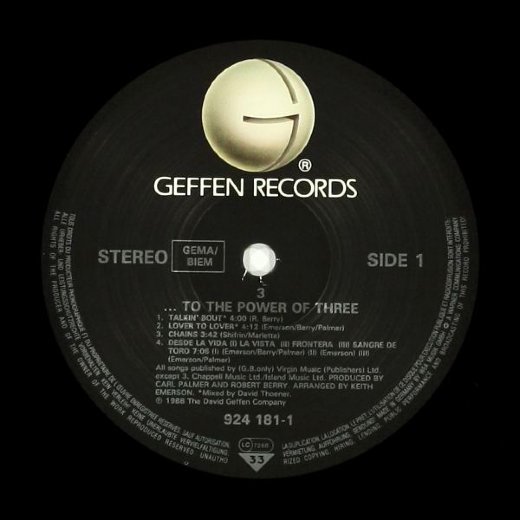 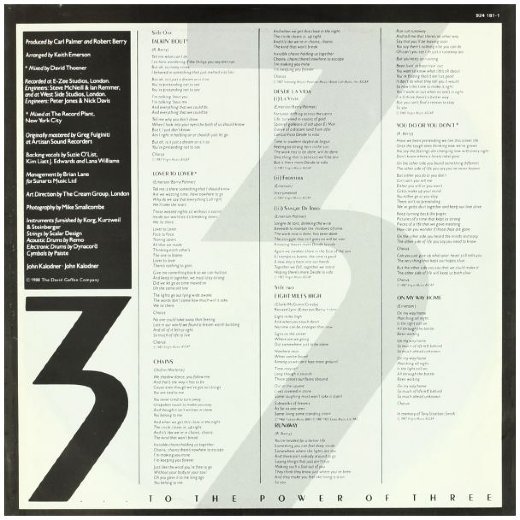 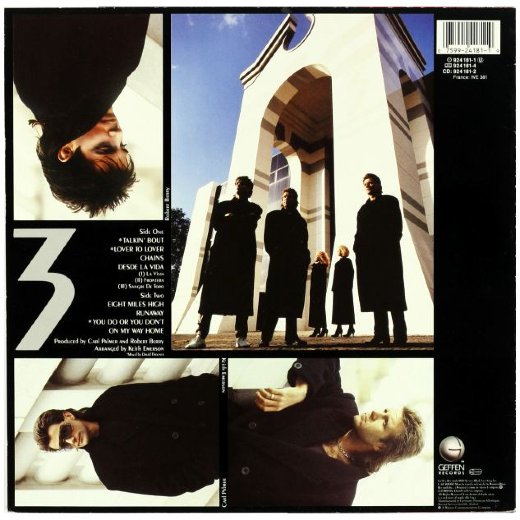 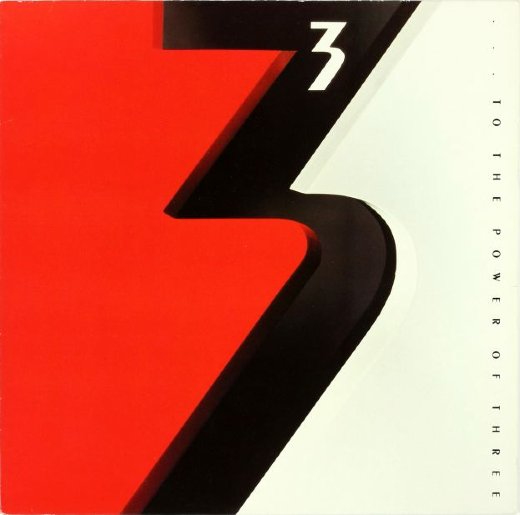 Anybody expecting any sort of iteration of ELP from this album should not invest on this. However, I found most of the tunes quite catchy & memorable. The (brief) Hammond solo in “Lover to Lover” rocks, and some serious power is generated in the first few minutes of “Desde La Vida”. Some of the songs are catchy, and some of the keyboard work stands out.

Am I the only person who actually liked this album? The band included 2/3 of the celebrated progressive rock act Emerson, Lake and Palmer (Greg Lake is replaced here by former Hush vocalist Robert Berry), but expecting another ELP is just not realistic. I think a lot of that bands success came from the chemistry between the three key players. Removing one changes the whole dynamic. Its also a bit unrealistic to expect a serious progressive rock album in the late 80s. Hell, even Yes was more pop than prog at that point. I think it helps to look at 3s 1988 debut album To the Power of Three like you would an Asia album. You know the players involved will have the technical chops to pull off progressive rock, but that making a good pop/rock album is the main focus. To that end, I think 3 passed with flying colors. To the Power of Three is a very solid effort, and is the kind of 80s pop-oriented rock album on par with what Asia and GTR were releasing at the time. It should surprise no one that this is a strong album musically. Keith Emersons keyboard work really carries the album. Robert Berry gives a string vocal performance as well, with a warm and steady voice that is perfectly suited for this kind of music. The album ventures into prog territory at times, such as the three-part “Desde La Vida”, and closing track “On My Way Home” sounds a lot like ELP, but for the most part it is a pop-oriented rock/AOR album, and a strong one at that.
Another reviewer recommended that only die-hard ELP fans buy this album. I have to disagree, and in turn recommend this to open-minded ELP fans, not to mention fans of Asia, GTR, and 80s pop/rock/AOR in general. The key is judging the album on its own merits rather than expecting something unrealistic.

I think most people were certainly expecting ELP. Well what they got was very good pop with a touch of Art Rock. Dissecting the songs,there are very good songs and very complex arrangements no doubt. Yes the songs are not like ELP but what they had was a very good singer : Berry, with a lot of enthusiasm to create anew.
It is certainly a shame that this outfit couldn’t or didn’t remain together. Instead they went on to create massacred versions of ELP like “Hot Space” and the like. Give it a chance, with an open mind.

5.0 out of 5 stars a 5, for 90% – spectacular performance …, April 24, 2007
Some folks I think didn’t ‘get’ this LP, because they didn’t get that it was never meant as a successor to any ELP records. This is (and at the time was promoted as) a POP-ROCK record, with moments of progressive … I like Greg Lakes voice but words can’t define how rangy a voice Robert Berry has next to Greg Lake ~ listen to how he goes up 2 higher keys, with ease, on the final refrain of “Talkin’ Bout” … Berry has a serious range, broader than that of other good singers, like Max Bacon (who he sang with briefly in GTR before joining 3) because he has a good bottom-end to his voice. “Talkin’ Bout” is a great tune … “Chains” is another good one … “You Will Or You Won’t” is a kool mellow song, with unique keyboard patches from master Keith Emerson ….. “Des De La Vida” is the prog epic on the CD, “On My Way Home” is a real nice piano/keyboard song.

5.0 out of 5 stars An overlooked gem of POWER-POP!,
Having been raised on Top-40 radio & literally dragged to my first ELP concert, I recall thinking how immensely talented they were. Now what would it sound like if they did a Beatles song? I finally got my answer here as Keith Emerson & Carl Palmer teamed with newcomer Robert Berry on a collection that equals the quality & appeal of the first 2 ASIA albums. “Talkin’ Bout” and “Lover To Lover” topped my fave list, while “Desde La Vida” comes closest to ELPs fusion-style, having been inspired by an Alberto Ginastera piece (remember “Tocatta” from BSS?). Why the record label didn’t push this is beyond me.

5.0 out of 5 stars …Also Known as the Only Album Released by Emerson, Berry and Palmer,
I bought this after only hearing the first two songs, something I have rarely done, and I have not been disappointed. And yes its true that ELP purists would accuse Emerson and Palmer of slumming until Greg Lake decided to get back with them, but if anyone’s earned that right, it would be Keith Emerson. Its not ELP, for sure, but then again what could be? Given Emerson and Palmers later problems with carpal-tunnel syndrome, that they were in top form is a miracle. “…To The Power of Three” may be a generic 80s rock release but its also a must for anyone who still considers Keith Emerson a keyboard god. Even pedestrian Emerson keyboard work is worth it, and this is far from that. Just don’t try to envision him sticking his Hammond B3 organ with swords while you listen; this is not your daddy’s Keith Emerson…

5.0 out of 5 stars The best album ever buy Keith Emerson & Carl Palmer