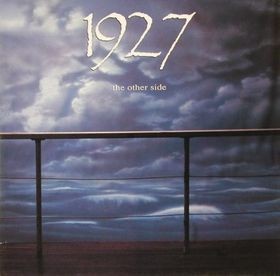 Excellent Hard rock / A.O.R, that came out in 90 through WEA records. The Other Side is an album by the Australian rock band, 1927 released in 1990. The album reached #50 on the 1990 ARIA Australian Year End Albums Chart.

1990’s The Other Side was the second album from Australian band 1927. The band’s sound treads the line between pop, rock, and AOR, but the album definitely has that late 80’s feel to it. It’s hard to come up with an exact comparison, but I’m reminded at times of the Outfield and Silent Running, with perhaps a bit of Mike + the Mechanics and Jon Butcher Axis thrown in for good measure. It doesn’t rock particularly hard, and there isn’t anything that would qualify as a catchy single, but the album works very well as a whole. It’s well written, very melodic, and has a heartfelt delivery that makes it quite beautiful to hear. I tend to go for the heavier stuff, but this album resonated with me from the very first song. I wouldn’t have appreciated it in 1990, but I’m glad I found it in now.
Like all 1927 albums, this is pretty hard to come by. Serious 80’s collectors or fans of the band might find it worth the price though. This gem is one to add to your collection.

came with printed inner sleeve
Made in Germany

The Other Side is an album by the Australian rock band, 1927 released in 1990. The album reached #50 on the 1990 ARIA Australian Year End Albums Chart

Released in mid 1990, The Other Side yielded the top 20 hit Tell Me A Story (OZ#17), but lacked the depth of quality offered by Ish. Though finely crafted pop songs, neither Dont Forget Me (OZ#53) or The Other Side (OZ#80) made a major impact on the charts.

the follow up to the classic “ish” album, some seriously great music. Musically it was as good. Great westcoast flavoured AOR……

Nice follower to the band’s debut album “Ish” but not as strong as the aforementioned one,in fact none of the other 1927’s releases have the strenght to be compared with the band’s best effort IMO. In here you have some good songs in the shape of “Tell Me A Story”, “The Other Side”(the best cut of the album and a nice one),”A World Without You” & “A Day Like Today”( )…enjoyable…86/100

Be the first to review “1927: The other side LP Excellent A.O.R Check videos” Cancel reply