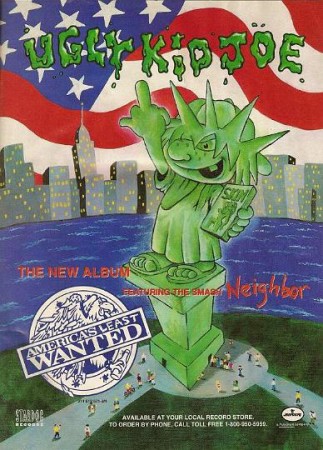 America’s Least Wanted is the full-length debut album by rock band Ugly Kid Joe, released in September 1992. The title is a parody of the famous phrase “America’s Most Wanted“.

The album was a commercial success, charting three singles on the Mainstream Rock Tracks (“Neighbor”, “Busy Bee” and “Cats in the Cradle“). “Everything About You” peaked at No. 3 in the UK Singles Chart and at No. 9 in the Billboard Hot 100. “Cats in the Cradle” (a 1974 folk rock song by Harry Chapin), also reached made the Billboard Hot 100, peaking at number six, earning the album two top 10 Billboard hit singles. The latter song also made it to No. 11 on the Top 40 Mainstream. As of 1995, the album has been certified double platinum

5.0 out of 5 stars One Of The Best Albums Ever Released,
This is Ugly Kid Joe Debut album, and its got some of the best music I’ve ever heard, in some places is mind blowing. You’ll find it really hard if not impossible to skip any tracks at all. This is one of the great albums. So, if you like thrash, or just hard rock mixed up with some soft guitar, then go and buy this album now.

5.0 out of 5 stars Essential Piece of the 90….
13 Track album including the bands second hit;
Cat in the Cradle.
– Each and every song could have been a single.
– Busy Bee, Come Tomorrow and So Damn Cool are probably my favourites.
– Vibe is fresh, positive and upbeat with a poignant twist.
– absolutely essential piece of the 90.

While As Ugly As They Wanna Be was recorded in 6 days, the band had 2 months to record their first full-length album Americaâs Least Wanted. The deadline for the album was the Ozzy Osbourne tour. The band was invited to be support-act on his “”No More Tours”” tour, which was supposed to be Ozzyâs last tour ever. UKJ wanted to have the album finished before the tour with their all-time hero started. The band had 4 days of pre-production at Mates rehearsal studios. When they entered the studio to start the recordings for the album, they hadnât even enough songs to record a full album. They had 10 days to write a few more. Therefore, they never had a chance to demo songs like Busy Bee, So Damn Cool or Mr. Recordman. The first time they recorded them was immediately for the record. At the end of the 2 months, they needed 10 days more to finish the album, while t
he tour with Ozzy had already started! Whit had to fly back to LA several times during the first days of the tour.

The album contains 13 songs, 2 of which were also on the EP. Everything About You, obviously, because record company Mercury wanted it, and Madman because Whit wasnât satisfied with the first version of the song, as it appears on the EP. Whit had to do all the vocals for As Ugly As They Wanna Be in one day. Madman was the last song he sang, and his voiced was trashed. The version on Americaâs Least Wanted is a complete new vocal track. First song on the album is Neighbor, a funny song about a sloppy dude who moves into a nice suburban area. Whit often joked that he was that neighbor.

Goddamn Devil, written by Klaus, is about Satan. Come Tomorrow is how you always end up right where you started. The story behind Panhandlinâ Prince is that Whit went to New York somewhere in 1988 to visit Mary, a girl he knew. Whit talked to a lot of panhandlers and was surprised how much money they were actually making. They are happy and living their lives, and theyâre proud of it. Busy Bee, written by Dave and later featured on the rollerblade movie Airborne, is about how people donât take the time to really live. (Everything About You and Busy Bee are the only UKJ-songs that are featured in movies. The producers of the movie Dumb & Dumber wanted a song from UKJ as well, but when the band gave them one, they didnât like it due to content.

However, UKJ were not willing to change it). Donât Go is a song about Whitâs girlfriend of 1988. Whit wrote So Damn Cool about the people who suddenly liked the band now that they were famous. Same Side is written by Cordell. The Harry Chapin cover Cats In The Cradle was thrown on the album at the last minute. The song is the first song Whit has ever heard in his life. Back in 1993, when the song made it big in the charts all over the world, Whit hadnât seen his dad in several years. The original writers of Cats In The Cradle were very satisfied with UKJâs version. Howard Fields, the drummer on the original song, sent a letter to UKJ saying that the song sounded great and that Harry would be smiling if he was still alive. However, it was never supposed to be released as a single, until radio stations got all these requests for it. Mr. Recordman reflects Klausâ thoughts about getting signed, making records and the music industry. Thatâs why they let him sing the song. Dave plays lead guitar on it.

A number of guest musicians appear on the album as well. Jennifer Baily from Halfway Home did some background vocals, and the spoken intro on Everything About You is from Pat from Saturday Night Live. A friend of UKJ was in a band in Santa Barbara, and Pat was his cousin. Dean from Infectious Grooves plays wah-wah on Same Side, and Rob Halford from Judas Priest sings background vocals on Goddamn Devil. Producer Mark Dodson had earlier produced the Judas Priest albums Defenders Of The Faith and Sin After Sin, and is friends with Rob. Rob came to say hello in the studio and liked Goddamn Devil. The band asked if heâd wanna sing on it, and so he did. The mumbling words at the end of the album (“”You guys are gonna be great…””) are from producer Mark Dodson. The band recorded him in his sleep.

To support America’s Least Wanted, UKJ toured with Ozzy Osboune and later on with Def Leppard. In Corpus Christi, TX, during a club tour, Cordell fractured his right ankle on a shaky stage ladder. He had cyberglas cast and at first he sat on a stool to play, but got more mobile once he got a flexible “”robocast””. On stage, Cordell didnât use crutches.

Be the first to review “UGLY KID JOE: Americas Least Wanted [Tape] “Neighbor”, “Busy Bee” “Cats in the Cradle”+ “Everything About You”. Check videos” Cancel reply 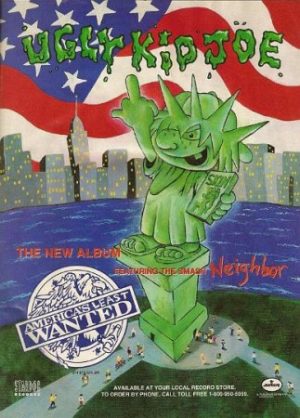