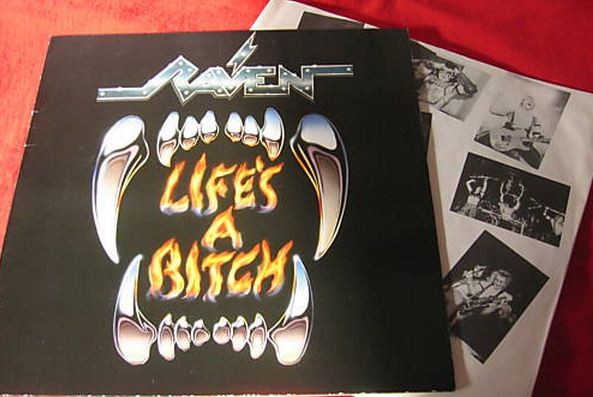 Here is an audio explanation about what the album stands for, the band, etc.   http://chirb.it/JPxB7h

Now the PACK is really BACK – 100%
The clearly anti-commercial album title says it all: no more synth guitars, pop metal leanings, horn section, bubble gum and everything else about “The Pack Is Back”, fortunately the short Raven commercial era is definitively over. They were dropped from the big label Atlantic, and that’s the best that could have ever happened to the band. There would be no more pressure from that record company, which was obsessed with massive album sales, radio hits and money-maker artists. Atlantic didn’t care about the quality of the music obviously, otherwise they wouldn’t have kicked Raven out, because “Stay Hard” or the “Mad Ep” were really honest metal releases. Anyway, it didn’t take so long to the band to realise the commercial way was the wrong path for a metal band. Unfortunately, other band such as their NWOBHm mates Saxon would be playing commercial cheesy stuff by the early 90s (no comments about Def Leppard…). But back in 1987, “Life’s A Bitch” along with Anthrax, Running Wild, Exodus or Sodom’s records, among others, would make that year a great one for metal.

The stuff here its raw, fast and powerful. “The Savage And The Hungry”, “Fuel To The Fire”, “Only The Strong Survive” or “Playing With The Razor” are from the finest stuff Raven has ever recorded, and I would definitively put those ones in the same level as their first 3 album masterpieces. The killer speed metal sound filled with aggression and music ability is back, and the lyrics also became harder, listen to “You’re A Liar”, “Never Forgive” or the title track (“…I feel like telling the world to fuck off!!!”). On other hand, the songs are still catchy, specially “Pick Your Window” and “Overload”, but not commercial at all, that’s one of the differences with “Stay Hard”. Also the production by Chris Isca and Raven themselves is not commercial focused, something that makes the sound more heavy and tough. And obviously I highlight the remarkable work of the Athletic Rock metallers: guitar virtuoso Mark Gallagher, killer drummer Rob “Wacko” Hunter and, of course, John Gallagher’s still crazy and hyperactive vocal style (whose screams inspired thrash vocalists such as Tom Araya by the early 80s).

The remastered version includes two bonus tracks, “Finger On The Trigger” and ” Speed Of The Reflex”, this last one from the “Mad Ep” and one of the best songs that Raven had recorded while they were with Atlantic Records which also show that their sound started to change into their original amazing metal sound. Its absolutely shameful that a metal masterpiece like the “Life’s A Bitch” ’98 CD reissue would be so hard to find, I hope someday that will change, not only with this album.

So if you’re a 80s METAL maniac or just a NWOBHM or thrash collector, this album can’t be missed in your collection.
————————————————————-
IRON LEAGUE! – 100%
Raven is one of the many legions of bands in the “should have been bigger category” but a decade or more of poor business decisions and bad management have kept this powerhouse of NWOBHM underground even to this day. The bands mid career release ‘Life’s a Bitch’ is possibly their best, showcasing the bands talent not only as song writers, but as musicians as well.

The production is pretty good for a later period NWOBHM album. The guitars are heavy and fast. There is a lot going on as the riffs are very busy and fairly technical. The leads and solos are intense and soaring. There is an ungodly amount of melody from start to finish but it works very well. The guitars are tuned to standard.

The bass is surprisingly competent and doesn’t always follow what the guitar is doing. The drums are a little more than standard, but work all the same. The vocals are perhaps the bands selling point as John has an incredibly unique voice. Its a case of you either love or hate it as it does tend to get obnoxious in some places. He is almost unmatched however for his high range.

This is a very energetic and fun album that has a lot of soul and feeling to it. This is by far the bands creative peak as everything before it was merely building up to this and everything after has been less than. Its albums like this that make one throw their hands up in confusion as to why band X never made it outside of their styles specific limits.

Be the first to review “RAVEN: Life’s a bitch LP 1987 + inner with pics and lyrics. Check audio.” Cancel reply 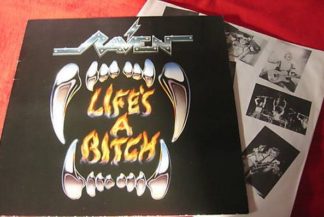