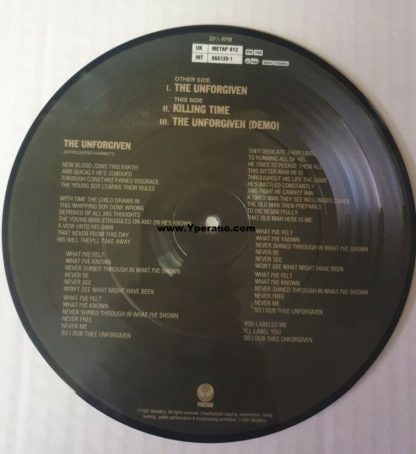 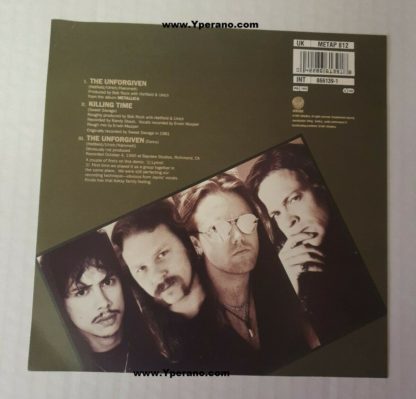 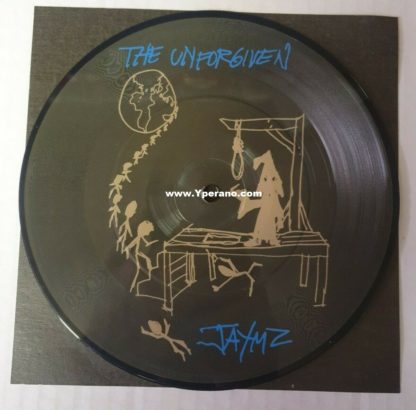 METALLICA The Unforgiven (Rare 1991 UK limited edition 3-track 7″ PICTURE DISC single, also including Killing Time and a demo version of The Unforgiven. The disc features a ‘hangman’ image drawn by Jaymz on one side with the lyrics to the title track on the reverse, housed in a clear PVC sleeve complete with the original back picture insert METAP 812).
With Backing Insert. The Picture On This Single Has A Unique Picture Designed By James 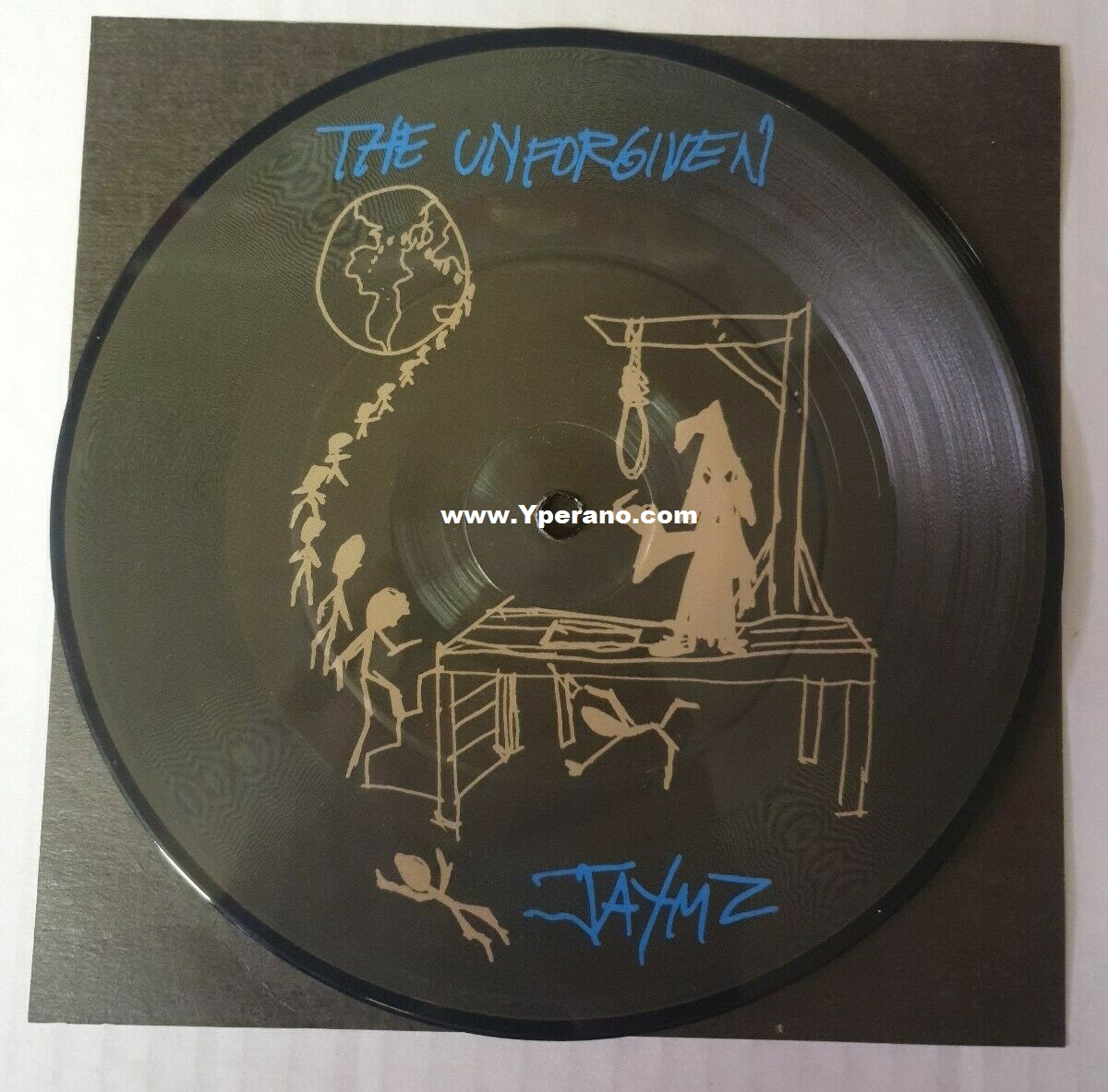 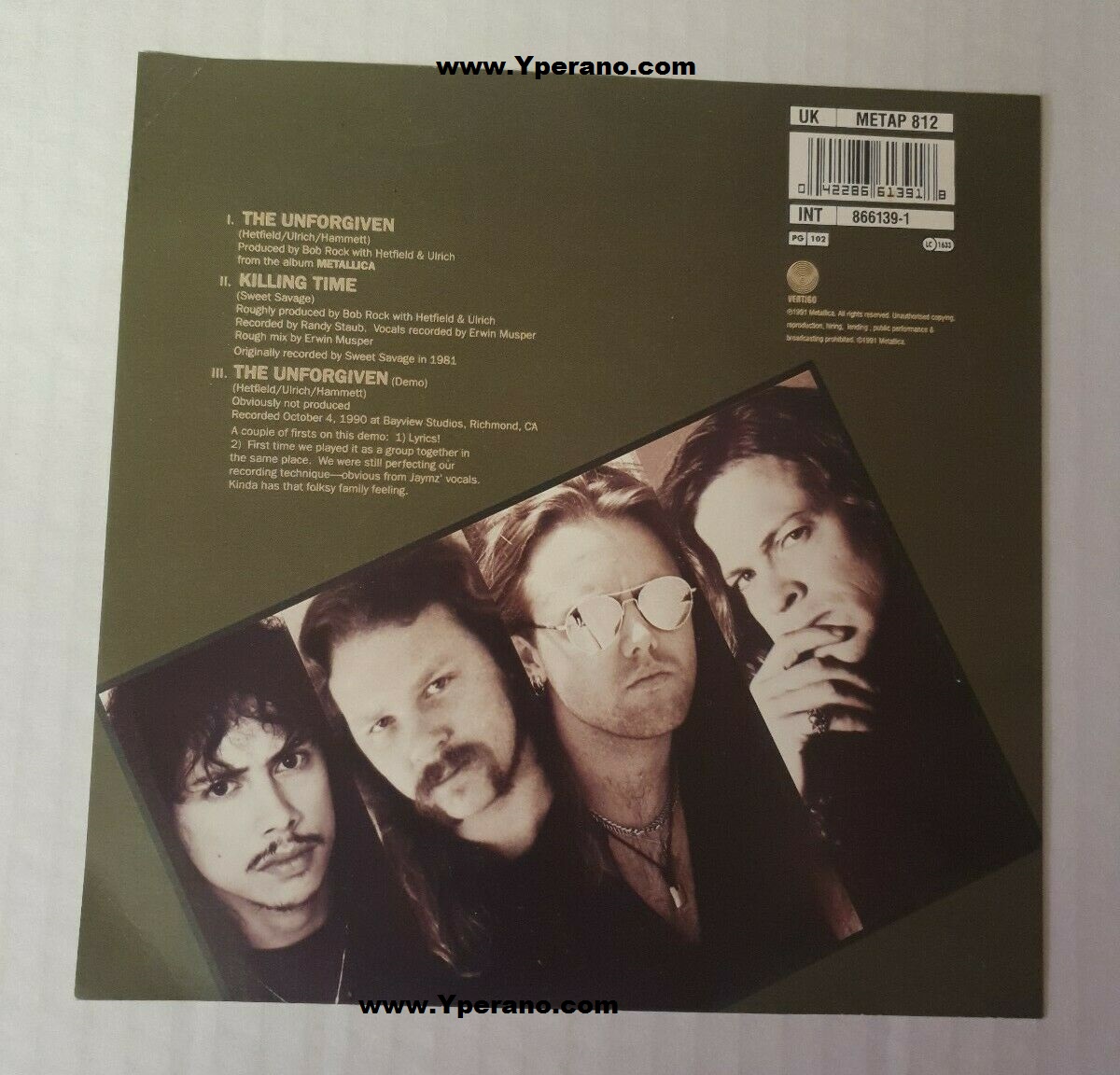 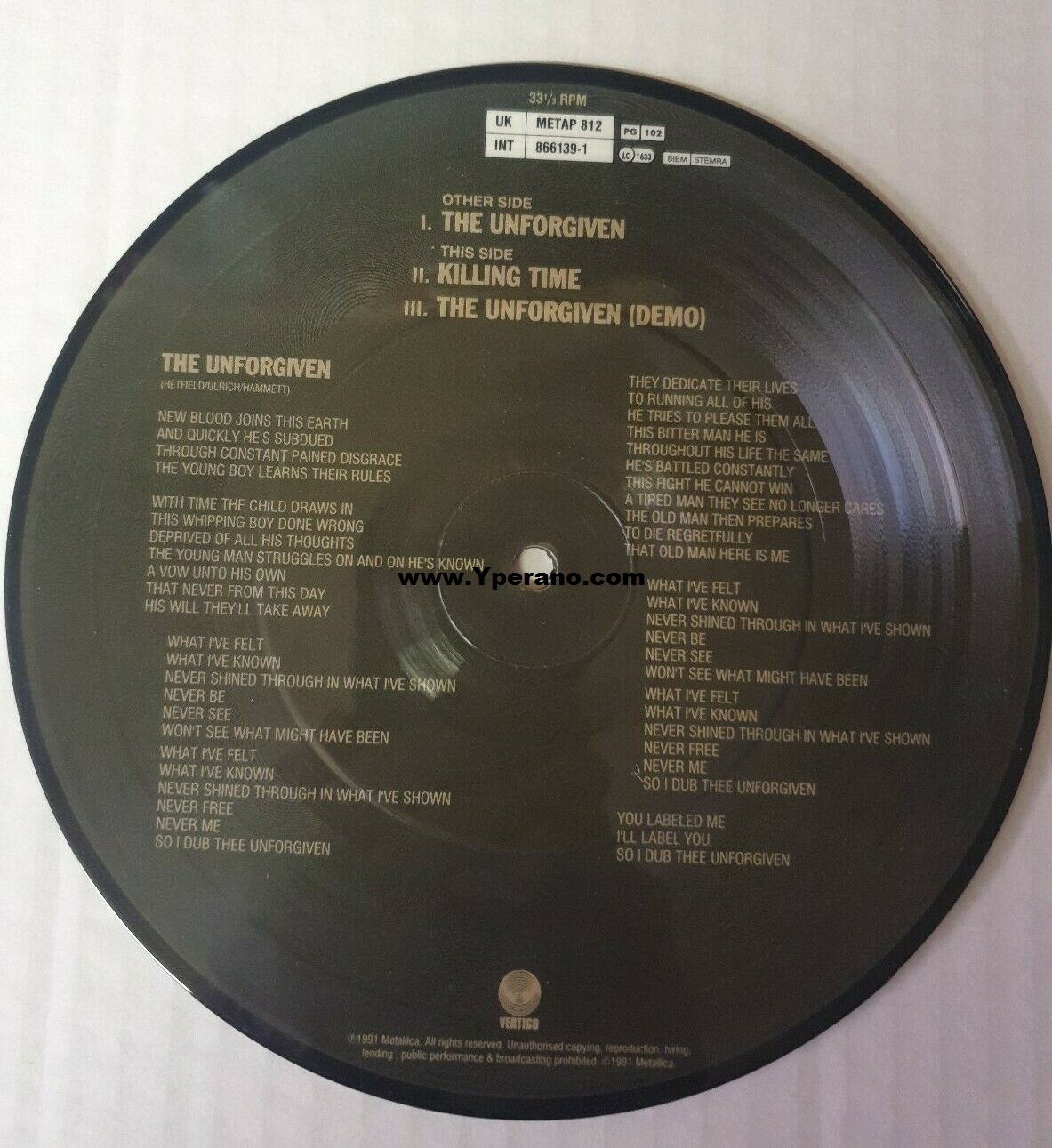 “The Unforgiven” is a song by American heavy metal band Metallica. It was released as the second single from their eponymous fifth album Metallica. Though one of the slower tracks on the album, its chord progression is distinctly one of the heavier. The song deals with the theme of the struggle of the individual against the efforts of those who would subjugate him.
The song has since spawned two sequels (both in name proper as well as thematically), in the form of “The Unforgiven II”, from the album ReLoad, and “The Unforgiven III”, from the album Death Magnetic.

History:
Lars Ulrich explained that the band wanted to try something new with the idea of a ballad – instead of the standard melodic verse and heavy chorus (as evidenced on their previous ballads “Fade to Black”, “Welcome Home (Sanitarium)” and “One”), the band opted to reverse the dynamic, with heavy, distorted verses and a softer, melodic chorus, played with classical guitars. The opening section contains percussive instruments performed by Ulrich, and also a small amount of keyboards.
The horn intro was essentially taken from a Western movie and then reversed so its source would be hidden, as Hetfield later explained on Classic Albums: Metallica – Metallica. While Metallica has never disclosed what movie the horn was taken from, it is believed to be from a piece of music called “The Showdown”, which was composed by Ennio Morricone for the 1965 Clint Eastwood “Spaghetti Western” film, For a Few Dollars More

Music video:
An accompanying video was released for the song. The black and white video is themed around a boy who spends his life living in captivity inside a small, windowless room made entirely of stone. As the video progresses he ages into an adult and then an old man. He spends his entire life carving into the stone to create a window while occasionally grasping his one possession: a locket. It is inferred that another captive lives on the other side of the stone room. The video ends with the old man finally creating a window through which he deposits his possession and subsequently lies down to die. A 11:33, “theatrical” version of the video exists, featuring several minutes of introductory scenes which precede the timeline of the main portion of the video. This version was featured on The Videos 1989-2004, the bands 2006 music video compilation.

Metallica covering the song live with the Sweet Savage singer:

Be the first to review “METALLICA: The Unforgiven 7″ Rare 1991 UK limited edition 3-track 7″ PICTURE DISC. Only one that doesn’t bare the Metallica logo anywhere!” Cancel reply