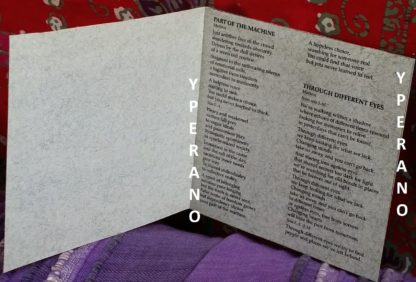 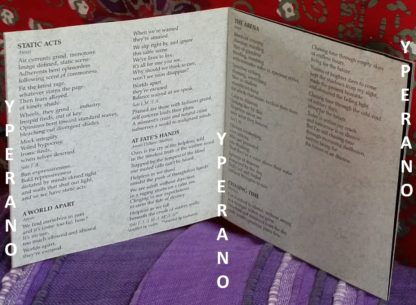 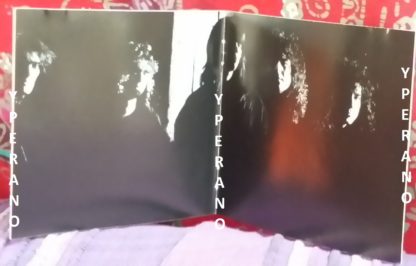 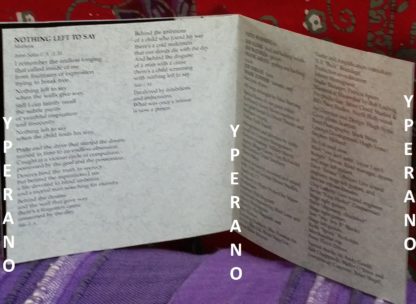 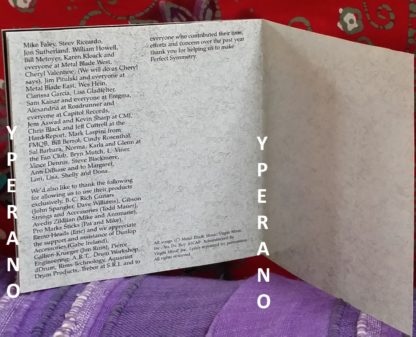 Perfect Symmetry was an album by progressive metal band Fates Warning released in 1989. It was the first album with Mark Zonder on drums.
The track “Nothing Left To Say” is featured on the soundtrack to the 1991 film, Freddys Dead: The Final Nightmare 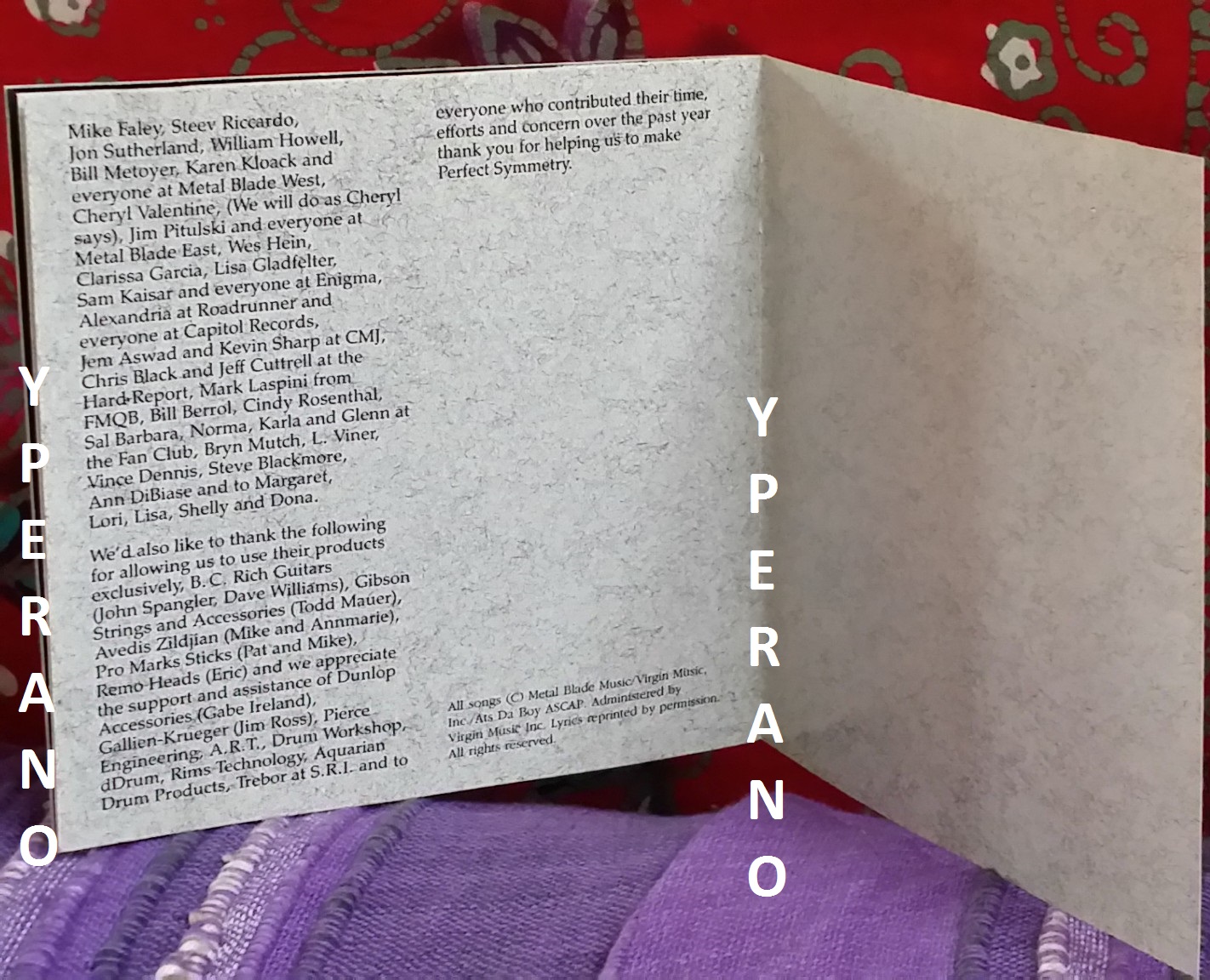 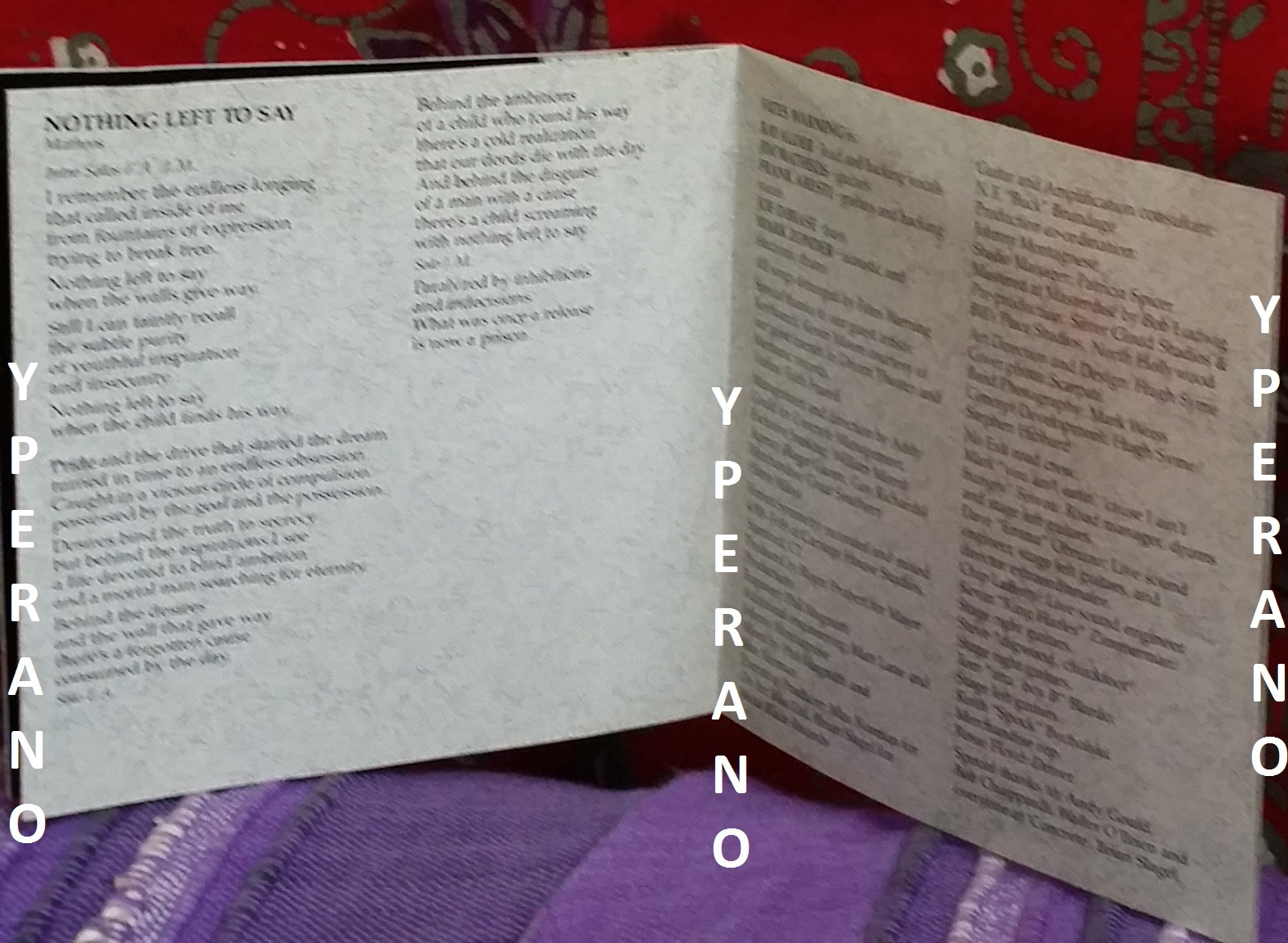 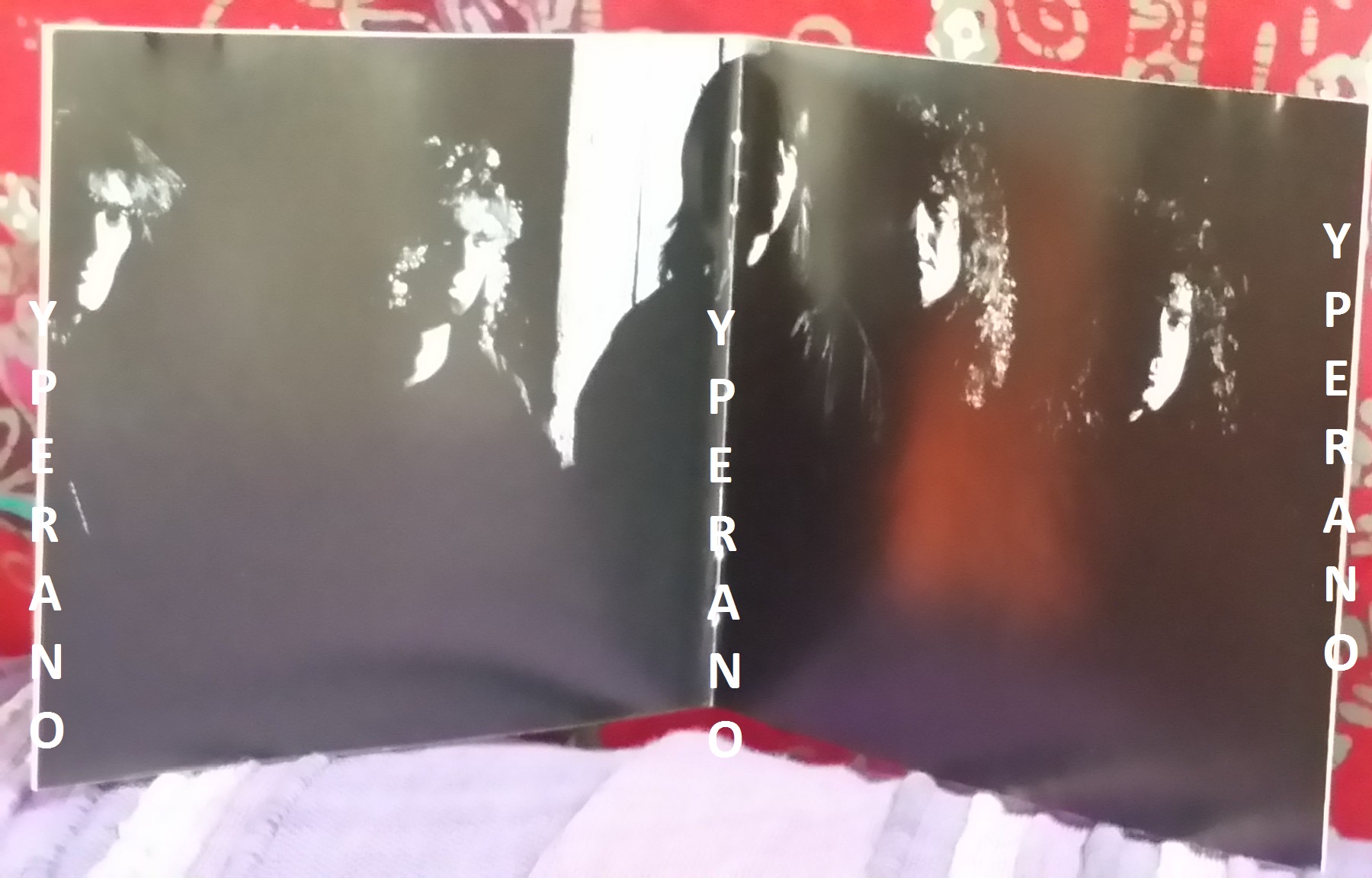 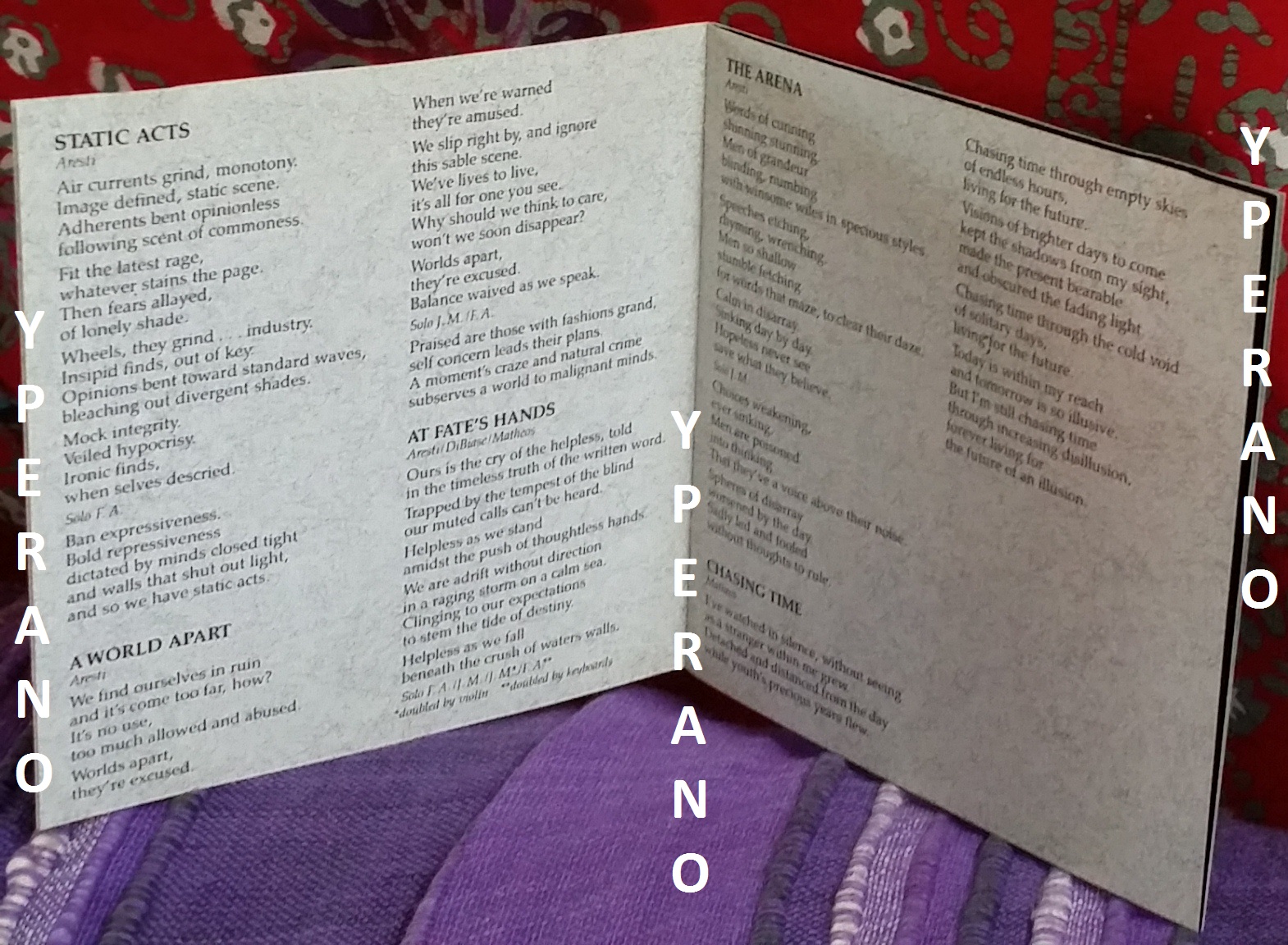 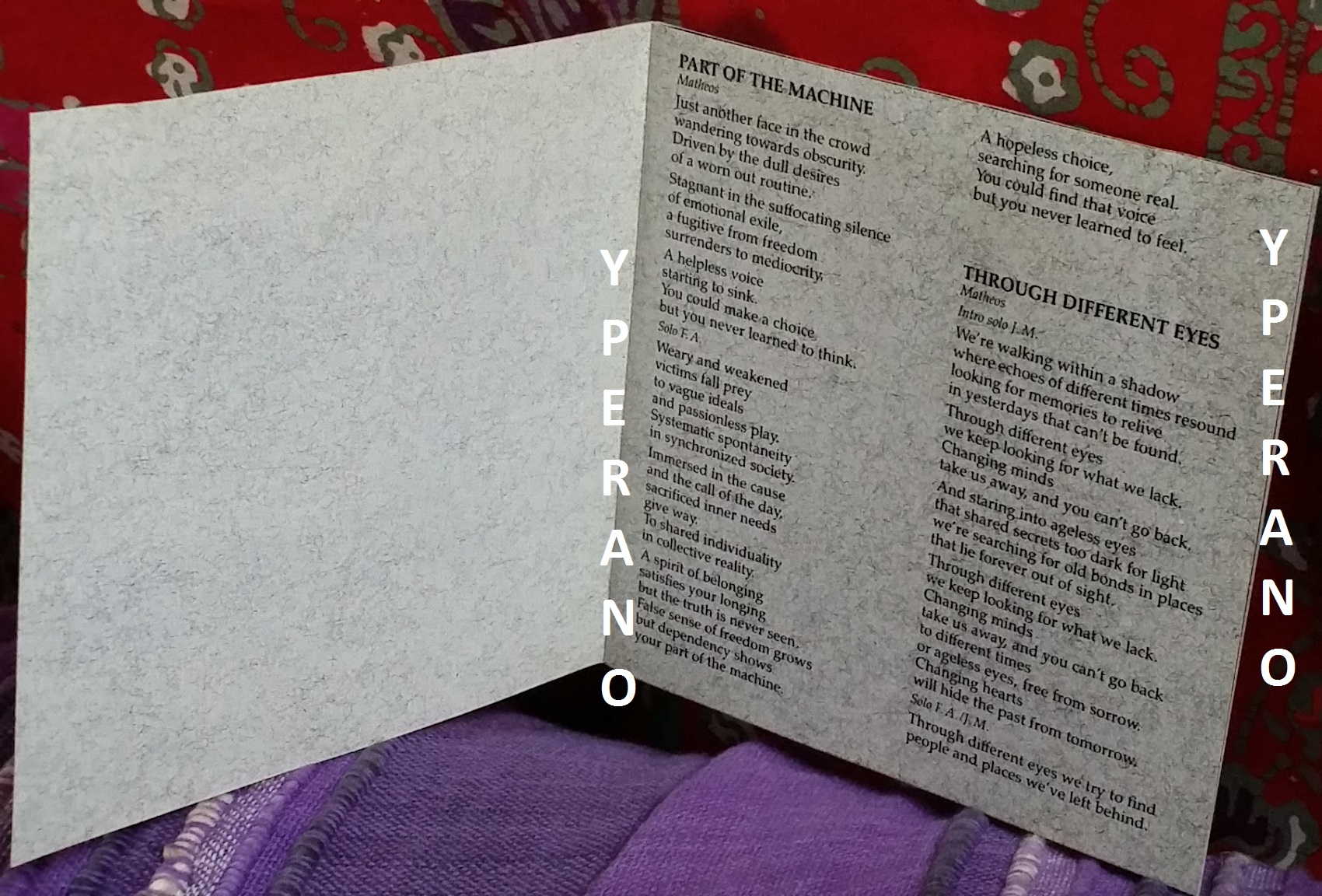 This was the recording that established Fates Warning as a progressive band. Their metal influences still dominate the groups overall sound; however, Mark Zonders unique approach to drumming adds another level of depth and credibility to the music. His double bass, odd-time introduction to “Part of the Machine” is the sessions defining moment, “Through Different Eyes” is a catchy song that provides insight into the bands future pop/metal direction, and “Static Acts” still stands as one of the most aggressive songs the band ever recorded. Ray Alders aggressive singing has a genuine quality which allows him to legitimately convey his anger and pain without sounding clichéd. “A World Apart” has some impressive odd-metered drumming from Zonder. “At Fates Hands” has become one of the bands classic songs, and for good reason. The incorporation of the violin and piano provide a refreshing change from the overall metallic sound. While Alder and Zonder prove here that the band is capable of achieving many different moods and sounds, the instrumental section of the song reveals that both Jim Matheos and Frank Aresti are still dependent on their metal guitar style. The most powerful song in terms of lyrics, singing, and playing is “Nothing Left to Say,” which stands as the bands high-water mark. An historic recording in the progressive metal genre.
————————————————————-
one of the most influential progressive metal bands in the genre in large part due to their ability to not allow their sound to stagnate and to constantly be innovative without copying other bands. Its a testament to a bands talent when you can go back 25 years and find that almost no two albums sound alike and that each one has its own personality and style.
Perfect Symmetry saw Fates Warning drop the traditional metal influences and focus more on a very precise and calculated progressive metal album. Mark Zonders style on this album combined with that cold precision translated into a feeling of loneliness and fear musically. The lyrics augment that cold, unfeeling atmosphere created by the music by utilizing a consistent theme of technophobia and fear of conformity, while at the same time displaying a fear of isolation as well. A song such as Part of the Machine with its very angular riffs, technically precise drumming, multiple changes and anxious lyrics is easily a great example of that cold, technical aspect and is also a great opener in general.

Another reason that this album was considered so significant is because this was the final album to feature Frank Aresti contributing to the song writing before band leader Jim Matheos took total control of it. A World Apart and The Arena were both penned by Aresti and feature a different take on the same theme giving the album a small reprieve from the oppressive atmosphere. Regardless of who wrote the songs though, they are all of very high quality, straddling the line between metal and progressive while maintaining a very cold, calculated feel due to the odd arrangements, angular riffs, moody clean guitar passages, rhythmic bass, and very inventive drum patterns.

5.0 out of 5 stars One of the best Prog rock albums of all time,
People who say Dream Theater is better or true prog metal is full of it. Its all in the songwriting, this band does a much better job than Dream Theater who plays a bunch of scales 16 notes. This album is there all time high and one of the best Fates albums there is. The new drummer Mark Zonder is amazing. May not be as heavy, but it far-passes anything in intensity
————————————————————-
5.0 out of 5 stars Melodic Ray Alder.,
If your new to Fates Warning, you should know that of the progressive metal genre’, Fates is a band that features one of the leading rock vocalists in the world today. Ray Alder has a vast range, clean tone, controlled vibrato, poetry, and angular melodies. On a canvas of very heavy oriented Metal.
This album has a moderate, more melodic and dynamic feel to it. Perhaps Fates Warnings most “beautiful” recording.
You’ll love the vocals.
————————————————————-
5.0 out of 5 stars Hard to turn off.,
Perfect Symmetry was my first experience with this kind of rock/metal, and I’ve listened to it for almost 11 years now. The music and the lyrical content of their music is timeless, it will still maintain its relevance far in the future. I was so enthralled with Perfect Symmetry when I first heard it, and all these years later I still have to close my eyes when I hear At Fates Hands. I feel very lucky that I’ve gotten to listen to these guys for so many years, and I’ve managed to enjoy all of their different “eras”. I deeply respect these guys for being so inventive and refreshing, even in the face of vast changes in their music or band members.
————————————————————-
5.0 out of 5 stars RELAXING, INTENSE – THIS ALBUM PUTS THE “V” IN VERSATILE!!!,
Fates WARNING IS ONE OF THE FEW GROUPS WHO DARED TO LEAP INTO THE UNKNOWN EVEN THOUGH THEY HAD A FORMULA FOR SUCCESS AND ENDED UP JUST GETTING THAT MUCH BETTER!!! THIS ALBUM HAS VERY INTERESTING SONGS THAT CHANGE TEMPO IN A VERY PLEASING FASHION! BEST SONGS ARE “STATIC ACTS”, “THROUGH DIFFERENT EYES”, “CHASING TIME” AND “THE ARENA!!!” I THINK IT IS A REAL TRAGEDY THAT THERE IS NOT MUSIC THIS INTERESTING OUT THERE ANYMORE!!! TAKE IT FROM ME – THESE GUYS ARE REAL MUSICIANS!
————————————————————-
5.0 out of 5 stars A True Landmark in the History of Prog
Fates Warnings Perfect Symmetry is a truly historic and genre-defining recording in progressive metal. Up until the late 80s, a term as “progressive metal” didn’t even exist. It could be easily argued that Perfect Symmetry and Voivods Nothingface, both released in 1989, are the first albums that marked the birth of really heavy, crushing metal elements blended with progressive music. This is different from any Rush, King Crimson or Yes inspired band. This is METAL with serious progressive overtones. Many people who listen to Perfect Symmetry today may find it a tad flat and uninspiring, but I challenge those people to go back to the year 1989 and find equally genre-busting, original, creative, forward-going releases. From a historical context, Perfect Symmetry ranks right on top of the list as one of the most influential albums ever.

This is drum god Mark Zonders debut with the band too. Listening to Zonders drumming is a true delight. I don’t think I’ve been amazed of this magnitude by anyone else’s drumming; Mark Zonder gives Fates Warning a new edge, makes them a better, more challenging act with tons of chops and transparency. Whilst this is merely his first album with the band, he works the drums with blistering power and accuracy, adding various odd-metered rhythms. Founding member Jim Matheos and Frank Aresti are still deeply rooted in a metal territory but their songwriting has moved towards a more cohesive style. Frank Aresti continues to integrate his impeccable skill into the songs as Matheos experiments with melody and harmony. Vocalist Ray Alder sings in a more disciplined manner; rather than screaming every verse, hes creating gripping melodies and delivering haunting lyrics. Hes not as effective in the music as hes on the bands 90s albums, but hes certainly getting there. DiBiase on bass is less prominent than, say Awaken the Guardian, but then he is more of a straightforward bass guy whose style would better fit the John Arch-era. Still, hes there 100% with subtle rhythms and bass grooves. Guesting on the album is ex-Dream Theater keyboardist Kevin Moore. Many think that Moore only played on Fates Warnings 1997 and 2000 releases, which is true to a certain extent. Kevin was a key member on A Pleasant Shade of Gray and Disconnected as he played practically on every song, but his real debut with Fates Warning is Perfect Symmetry, the track “At Fates Hands”. This is one of the longest songs on the album beginning with a forlorn violin piece alongside Moore’s distinctive piano melody. As Zonder plays with his cymbals, Kevin creates a creepy atmosphere which serves as a backdrop to the lengthy instrumental passage interwoven by Matheos and Arestis celestial lead guitar melodies.

The songs are pretty nicely evened out. There are compact metal songs such as “The Arena” and “A World Apart”. Mainly composed by Frank Aresti, the latter begins with dark and brooding acoustic guitars (which Aresti is great playing at) and introduces an unexpected odd-time polyrhythm by Mark Zonder before it delves into a dexterous and melodic guitar solo with lots of tapping sweeps. This is, in my opinion, one of the best solos on the album. “Part of the Machine” and “Static Acts” are penned by Matheos and Aresti respectively. Both guitarists play melodically strong solos that descend over Ray Alders lyrics. Alder particularly sounds great on “Static Acts” signalling the fact that he will be a defining element on the bands future releases.

“Through Different Eyes” and “Chasing Time” are the albums ballads. Matheos comes up with a somewhat bluesy guitar line in the intro of “Through Different Eyes”, which is enhanced by piercing screams from Ray Alder, and later a breathtaking guitar duel between the two axemen. I’ve always believed the style explored on this song is further developed on the bands subsequent release, Parallels. “Chasing Time” offers more violin and string instruments with emotional singing from Ray Alder. The progressive climax of the album, however, is the last song “Nothing Left to Say”. At nearly 8 minutes, the song finds the band in their most extreme and experimental prog metal phase. Plenty of solos abound the compositions with poly-rhythmic drum attacks, dense rhythm and lead guitars, and complex time signatures. Matheos’ lyrics once again are only a small taste of whats yet to come.
————————————————————-
5.0 out of 5 stars This is Fates Warning best album.
I never get bored listening to this album. Great musicianship and very intelligent lyrics. All the songs are good but “through different eyes” and “chasing time” stand above the rest.
————————————————————-
5.0 out of 5 stars Different, puzzling, beautiful and powerful. An incredible album,
It was 1989 I was hypnotised, amazed, scared, impressed during the entire reproduction of the album. It was an epiphany, a revelation, one of the best crafted, performed and recorded albums, EVER. A gem. Neither Fates or any other band has released something similar that I know of. Is the epitome of progressive rock/metal. Perfect Symmetry is an experience, the name was well chosen. Is perfect.
————————————————————-
5.0 out of 5 stars Ray Alders Best Vocal Tracks,
Fates has a world class vocalist. “perfect symmetry” & “no exit” have the most impressive vocal tracks in their discography.
Instrumentally, this album is very syncopated rhythmically, medium to slow tempo, and more atmospheric then the other albums. I’m not too fond of the “shrilling” guitar tone that lacks bottom-end, but this is a minor distraction only during solos….

This is a Fates Classic. I recommend highly.