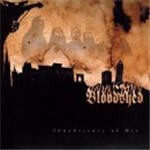 ============================================
5.0 out of 5 stars Crushing & Energetic,
Massive terror from these Swedish lads, intensive Black/Death Metal in the vein of Dissection and with a very recommendable production, clear and representative, from Sunlight Studios (same place used by Entombed, Dismember, etc). Code 666 surely has an eagle eye to catch nowadays most potential bands; Bloodshed is no exception, this tremendous quintet play vigorous rhythms mostly composed of sweeping riffs which move from broad mid-paste intervals through a melodic bridge to binary variation & tremble movements on the chords. The melodies tend to slop more or less like a rock n’ roll band yet in an inverted manner; sometimes complex and exquisite leads, other parts fluid power-chords. The various tempo alterations move from permutations of central riffs (mostly up/down patterns of motion) while keeping an ear for melody and the harmonic sublime. The embedded elements of Black Metal are retained in an aural formula, mostly aesthetic I would dare say, leaving the traditional Death Metal structures ala Hypocrisy (early stage) take leadership.
The vocal curses are rasping and sudden, pushing the listener against the wall and forcing to swallow the lyrics without option. Actually, the entire album is very much energetic and downright fluid. The eleven tracks of “”Inhabitants of Dis”” run like the wind, a sign of a pleasant album and of a prominent release by all means. The recipe of this album is not exactly new, however it pleases me and I find myself listening to it quite a few times.
So… Let the bloodshed begin!
————————————————————————————————-
A fantastic and highly aggressive fusing of Black, Death and Thrash Metal is that these guys hailing from Sweden are dishing out with their dÃ©but full length “”Inhabitants Of Dis””. The album just explodes with crisp, steely riffing and lots of melody combined with scowling death vocals and blackish screams. This is brutal with a rather raw sounding production which I think is great and done on purpose to add to it?s aggressive edge. Lastly the band is also original sounding
————————————————————————————————-
Death by Hanging!!!!!!!!!!!!!!!!!!!!!! – 95%
Now I have a pleasure to bring forth from the past an incredibly killer album of quite unknown band; a band, which I think have never gained the deserved attention and whose recordings have unfortunately passed by without much attention. And it is a shame, because I know that Bloodshed was great band and the music, which they served on “”Inhabitants of Dis”” and “”Bloodshed”” EP – these are the only two recordings of the band, which I know – was just special. And even if there were more than 15 bands called Bloodshed, this one was definitely the best of all. Personally I was introduced to this band, when their old record label CODE666 has sent me a promotional copy of “”Inhabitants of Dis”” to review. And I was so blown away by the music, its high quality, atmosphere… and also by the fact that something so brilliant came out from such an unknown band! Arrghh, that was it! Perfect sounds for me. I even immediately did an interview with Bloodshed…

But that was ten years ago and since then I am afraid I lost the band from my sight. All I know is that later on Bloodshed recorded and self released their second album “”Stale Cold Cell Recital””, but soon afterwards split up. And some guys have formed new band called Rev 16:8, which I think is little bit more known among the maniacs nowadays. But I feel disappointed that Bloodshed has split up so soon and that I will probably never have a chance to hear their second album… Anyway, I come back to “”Inhabitants of Dis”” frequently and maybe now it is time to write my second review of this album and maybe recommend it again to people. Because, you can trust me, whenever you see this CD somewhere available for purchase, buy it quickly. You won’t regret that!

Now, what’s so special about “”Inhabitants of Dis””, some will ask? Well, just give a listen… It is perfectly composed, performed and recorded album, with just truly brilliant songs. When you listen to it for the first time you already know it is just excellent and more so, personally I was amazed how catchy and memorable this album is, but at the same time it is aggressive and harsh and more so, it also has great dark atmosphere. And it is also incredibly diverse, so basically everything about this CD is just top notch! That diversity comes with the brilliant mixing of death and black metal playing and atmospheres, and I think Bloodshed did some of the best mixtures of these two styles, which I have ever heard. And more so, they got just killer production, thanks to the famous Tomas Skogsberg and his SUnlight Studio (but interestingly it doesn’t have that typical Sunlight sound at all!).

“”Inhabitants of Dis”” starts with a Big Bang! First song titled “”Death by Hanging”” is just incredibly killer black metal tune, with very specific riffing. And that riffing plus the atmosphere of the song reminds me strongly one of my favourite bands ever, the Norwegian Thorns. Already this fact is something what I would never expect, but welcome it with great pleasure, as – believe me or not – the result is just incredibly awesome. Great, catchy and memorable riffing, played at mid and utterly fast speed, harsh vocals, grim atmosphere… Yeah, this is it! But then the second song “”Mark of the Cursed”” blows out from the speakers, delivering increased speed, truly furious and relentless playing and is a pure death / black metal devastation! In such fast parts Bloodshed reminds me such God Dethroned from one hand – also because the vocals remind me Henri Sattler – but from the second hand there is a lot in common with Immortal, Necrophobic and even Marduk and Swedish black metal scene in general. With two calm, acoustic moments, which will give you a time to take a breath, the rest of the material is a damn blast. Every song has something special and it always is just perfectly composed and performed. I truly love every aspect of this album. The riffs are just brilliant, the vocals as well… and I love how intense, furious and fast “”Inhabitants of Dis”” is, but I like the slower parts as well, so it is great ferocious, aggressive and insanely memorable music…

Urrghhhh… EVery time when I listen to “”Inhabitants of Dis”” I have a great neck ache and feel like my head was about to fall off, as with such an intense music you must behave properly – I mean you must bang your head and mosh like crazy. And I just can’t understand how did it happen that something so brilliant is so unknown! Anyway, I truly recommend “”Inhabitants of Dis””; this is one of the best albums released in the early 00’s! This is one of those records, which you see in some catalogues and think “”uhh, never heard of this band before, so it probably is nothing good””. BUt trust me, this is just bloody excellent, so next time you see “”Inhabitants of Dis”” in a distro or wherever, buy it!!! This band is unknown, but they don’t sound like newcomers.
Standout tracks: “”Death by Hanging””, “”Mark of the Cursed””, “”Dark Trace””, “”Kiss of Cruelty””
Final rate: 95/100
————————————————————————————————-
Inhabitants of – 90%
Inhabitants of Dis (the city of Hell) with the title taken from Dantes Inferno got a superb mix of thrash, death and black metal.
To be perfectly honest Blackmetal is not my thing at all but the deathgrowls and the thrashy Slayer riffs make it brutal enough for me.
Recorded in the mighty Sunlight studio with Mr Skogsberg that once again proved himself to dominate in producing this genre.
My two favourite tracks are Death by hanging and Kiss of cruelty but the whole album is in fact more or less worth listening to.
The only track i didn’t like so much is the ballad Release where the acoustic guitar is a bit out of tuning and some mumbling voice in Swedish ranting in the background, but the guys wrote this song as a tribute for a friend that died so it’s a bit hard to “”dis”” it off too because you can’t really make a brutal metal song for that purpose.
Another thing is the cover layout, created by the Bassplayer is very professional.
Bloodshed is really worth checking out!”