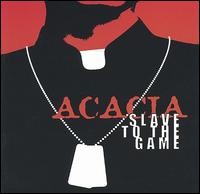 ACACIA: Slave to the Game CD. Rock – Alternative from the UK Wolverhampton. 12 song CD, CHECK all VIDEOS and audio

Acacia have been producing their own flavour of Rock music since the year 2000 and are well known for their storming live performances. In the time they have been together Acacia have acheived many of their goals, Recording and co-producing their debut album ‘Slave to the Game’ which they have filmed two music videos for, they have performed hundreds of gigs all over the U.K the band have also appeared on BBC T.V and Radio, Acacia have had great success in the U.S where they performed to sell out crowds in Texas and New York and also conducted several Radio interviews while there, as a result of this they have been invited to do a three week tour of New York, where they will also be playing to Record A&R and also in the pipeline the use of two songs from the album on a Major Motion Movie. All off there own back aswell i might add. So if you like your Rock music the way nature intended check Acacia out!
Release Date July 12, 2005
Label Acacia
Genre Rock
Tracks:  https://store.cdbaby.com/cd/acacia  Check audio
1 Worlds Apart 04:01
2 Hit Me 02:47
3 Cry 03:49
4 Dreaming of Tomorrow 03:22
5 Slave to the Game 03:15
6 Feel You 03:51
7 Talk About the Money 03:21
8 Loves Waiting 05:20
9 Tonight 04:14
10 Never Do 02:59
11 Without You 04:17

Be the first to review “ACACIA: Slave to the Game CD. Rock – Alternative from the UK Wolverhampton. 12 song CD, CHECK all VIDEOS and audio” Cancel reply

You're viewing: ACACIA: Slave to the Game CD. Rock – Alternative from the UK Wolverhampton. 12 song CD, CHECK all VIDEOS and audio £2.50
Add to basket