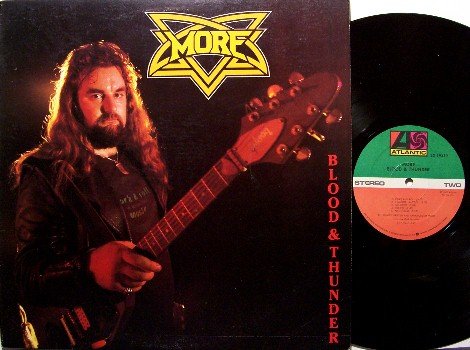 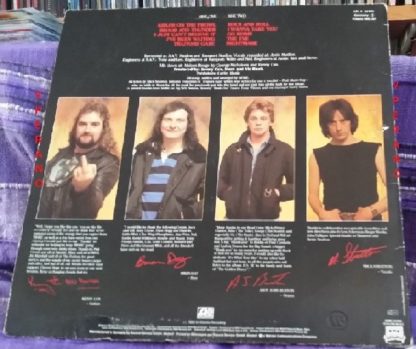 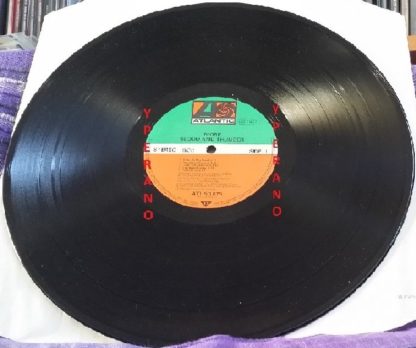 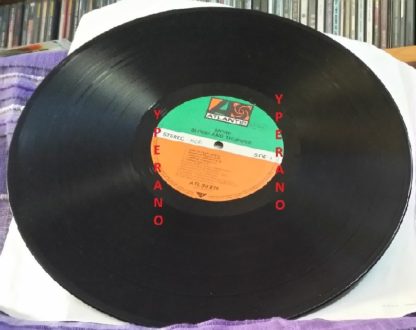 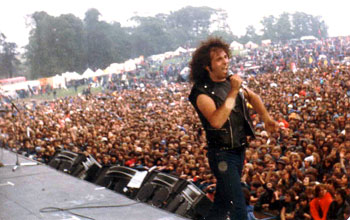 Kenny Cox spearheaded More into their second album at full speed. Cox’s vocal stylings suggest a weird hybrid between W.A.S.P. frontman Blackie Lawless, Dio, and Brian Johnson, while More continue to tread down paths forged by the guitar riffs of Led Zeppelin and the ferocious drumming of Black Sabbaths Bill Ward. There is nothing new here that hasn’t been said or done before, but More do the essentials well enough to make this a great listen, if you’re looking for something new that’s been overlooked in the canon of heavy metal. 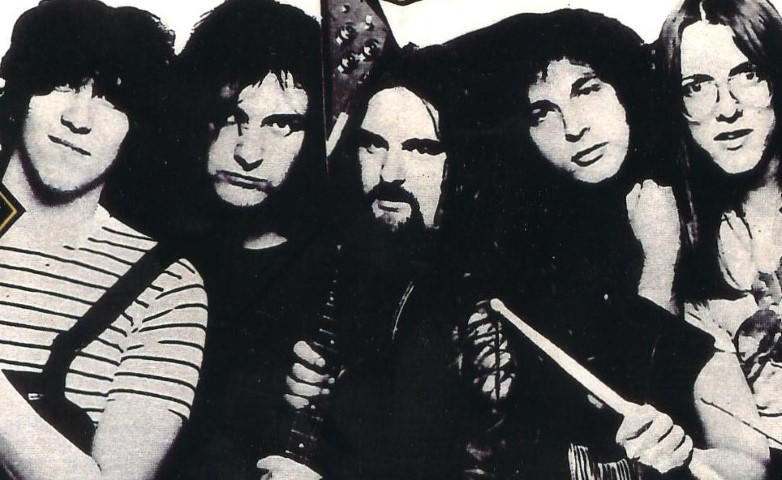 Side One:
Killer on the Prowl
Blood and Thunder
I Just Can’t Believe It
I’ve Been Waiting
Traitors Gate

Side Two:
Rock and Roll
I Wanna Take You
Go Home
The Eye
Nightmare

Whose bright idea was it to use that photo for the album cover? I mean, even if the album completely sucks, the easiest thing to do is make a kick-ass heavy metal album cover. I don’t know how many times the album cover alone has made me take interest in an album. To waste that opportunity on a dumb photo like this is just ridiculous, right? Put a devil, a dragon, or a naked chick on the cover! Not Kenny Cox! The man tears it up on guitar, that’s for sure, but that doesn’t mean he needs to be on the cover looking like this!
Blood And Thunder was this British bands second album. Their debut was 1981s Warhead. Both LPs were released by Atlantic Records. Only guitarist Kenny Cox (the centrepiece of More) and bassist Brian Day remained from the Warhead lineup. Mick Stratton was brought in to replace Paul Mario Day on vocals. Day left More during the recording of Blood And Thunder to form his own band, Wildfire. Stratton came in at the eleventh hour, scrapped Days lyrics, wrote his own lyrics, and recorded new vocal tracks for Blood And Thunder. Furthermore, a new drummer was brought on board (A.J. Burton).

Blood And Thunder was recorded virtually live, according to Kenny Cox. Indeed, this album seems much more energetic than Mores rather stale debut Warhead. The production on Blood And Thunder is superb. More were one of the few New Wave Of British Heavy Metal bands to appear on a major label, and therefore one of the few to be afforded the luxury of top-shelf production (see also Quartzs Stand Up And Fight).
Across the board, Blood And Thunder is a marked improvement over Warhead. Burton provides a spark on drums and Stratton’s vocal performance outshines Paul Mario Days work on Warhead. Stratton has a muscular hard rock voice. He oscillates between a throaty wail and clean melodic singing style. But it is Kenny Cox who really keeps things smoking with his potent axe work. With his Mississippi mudflaps flailing in the breeze, he blazes a path towards a righteous headbang.
My two favorite tracks on Blood And Thunder happen to be the two cuts that open the album, Killer On The Prowl and Blood And Thunder. These are two nasty riff rockers, and Stratton sounds great. 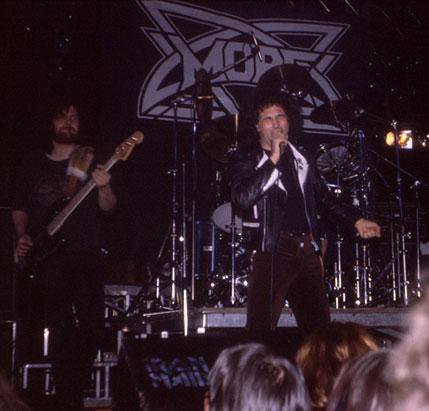 More was another New Wave of British Heavy Metal band that had all the talent but none of the breaks. Just two albums Warhead and Blood and Thunder before it was all over in a mess of management and legal issues. Thought for a while it did look like their chops would take them far.
Believe it or not, original vocalist Paul Day was briefly in a very early incarnation of Iron Maiden as both bands have London roots. More gigged far and wide building up a following and noticed by all the right critics. They contributed one track Soldier to a compilation album Metal Explosion [Metal Explosion From The Friday Rock Show LP is on sale on the Yperano site]
A signing to big label Atlantic followed and produced their début Album entitled Warhead. Such was the bands emergence at this time that they even got to open the Monsters of Rock festival at Castle Donnington on 1981. I might even have been there cant remember went to a few back then though who was on I have no idea it was so long ago. But that doesn’t matter.
On the back of Donnington and support slots with some of the major names of the day it did look like More could have it all and recording began on what would become their second album Blood and Thunder. However in true rock music tradition this is when it started to fall apart. Day got a better offer and went off during recording to join Wildfire.
In came new vocalist Mick Stratton though apparently re-wrote the lyrics causing some delay in recording. Other line-up changes came about before the album saw the light of day and changes didn’t stop there with perhaps the most notable one being Laurie Mansworth leaving to form Airrace.

The MORE bio:
MOREs vocalist Paul Mario Day and guitarist Paul Todd actually played briefly for one of the early incarnations of IRON MAIDEN. MORE debuted with the track soldier’ on the 1980 BBC ‘Metal Explosion’ compilation album and released ‘We are the band'(with Atomic Rock song) single, it reached N. 56 in the U.K national charts in 1981 before the group were signed by Atlantic(after session on the Friday Rock Show and DJ’d by the late Tommy Vance, who was a big MORE fan. Within three days the band had seventy one offers on the table from record company’s, agencys, publishers, etc. The band choose Atlantic Records and recorded their début album ‘Warhead'(at Binfield Manor studios England and it was mixed at Subterranean studios, Ann Arbor, Michigan and Sound Suite studios, Detroit, Michigan, December 1980, exactly when John Lennon of BEATLES was shot dead in New York). ‘Warhead’ sold 40,000 copies in Germany. Todd had already been replaced by Laurie Mansworth on second guitar.
After supporting(with LIONHEART), DEF LEPPARD, TED NUGENT, GIRLSCHOOL, SAXON and KROKUS on their British tours and Europe(with their friends IRON MAIDEN), along with subsequent gigs throughout the U.K. as headliners on the Atomic Rock tour(showcasing up and coming heavy metal talent), MORE opened Castle Donington ‘Monsters Of Rock'(featuring AC/DC, WHITESNAKE, SLADE, BLACKFOOT & BLUE ÖYSTER CULT) festival on 22.08.1981 with 65,000 people crowd (they had to leave immediately after the show as they had to perform later that day in another outdoor festival in the South of France supporting FOREIGNER) and next day festival in Darmstädt, Germany(again with BLUE ÖYSTER CULT & BLACKFOOT plus FOREIGNER, MOTÖRHEAD, IRON MAIDEN, KANSAS) before they began recording their second album ‘Blood & Thunder’. Early stage work began with producer Pete Hinton(Vic Rush came later), but Paul Mario Day quit(he had arguments with manager Gerry Slater) when 2nd album was completed to join WILDFIRE(1983-1985) with guitarist Martin Bushell and after SWEET(1985), BLACK SABBATH tour being cancelled, because Kenny Cox had arguments with BLACK SABBATHs road crew after they let a huge pyro off during MOREs sound check at Hammersmith Odeon, London on December 31st 1982… Andy John Burton joined the band straight after Frank Darch left and before ‘Warhead’ was released, and also was with the band from then on and for the 2nd album ‘Blood & Thunder’. He did all the major tours with the band… The band soldiered on, recruiting vocalist Mick Stratton although the album was delayed as Stratton re-wrote lyrics to all the previously recorded material. Bassist Brian Day left during recording to be replaced by Barry Nicholls. The record was never released in Britain, but did surface in Europe before Laurie Mansworth left(due to disagreements over musical style and direction with Kenny Cox & manager Gerry Slater) to form the much mellower AIRRACE with drummer Jason Bonham… Shortly, 7″ single Trickster(A-side) with an excellent version of ‘Hey Joe’ song as B-side(Kenny Cox, Barry Nicholls, Mick Stratton and Andy John Burton playing) was recorded and released on Atlantic Records in 1982… MORE reformed briefly in 1985 with Kenny Cox, vocalist Ron Jackson, guitarist Mel Jones, bassist Barry Nicholls and Paul George on drums, but the whole thing was unfortunately short-lived… Kenny Cox joined the ‘Fatman’ band MAMMOTH led by ex-SAMSON vocalist Nicky Moore and former GILLAN bassist John McCoy. Laurie Mansworth came back to the fore as manager/producer of ROADSTAR… A further attempt at reforming MORE in the spring of 1998(with a few gigs at the Cartoon Club in London), fronted by former TRAITOR, AXON IV and BRIAN CONNOLLYs SWEET man Mike Freeland(fan of Paul Mario Day), drummer Rick Dyat and after Andy Robinson(now with GODSIZED) stalled when at Easter weekend 2000 Kenny Cox suffered five strokes, which ruined serious record company interest. Subsequently Barry ‘Baz’ Nicholls went on to NIGHTFALL and after DANGEROUS BREED. Mike Freeland joined NEMESIS before rejoining Nicholls in DANGEROUS BREED(now LAZARUS DOGS). Freeland subsequently journeyed on to PRAYING MANTIS… Brian Day left music business. Kenny Cox is in a bad shape(in a wheelchair). Paul Mario Day lives in Australia(since he left SWEET in 1986). 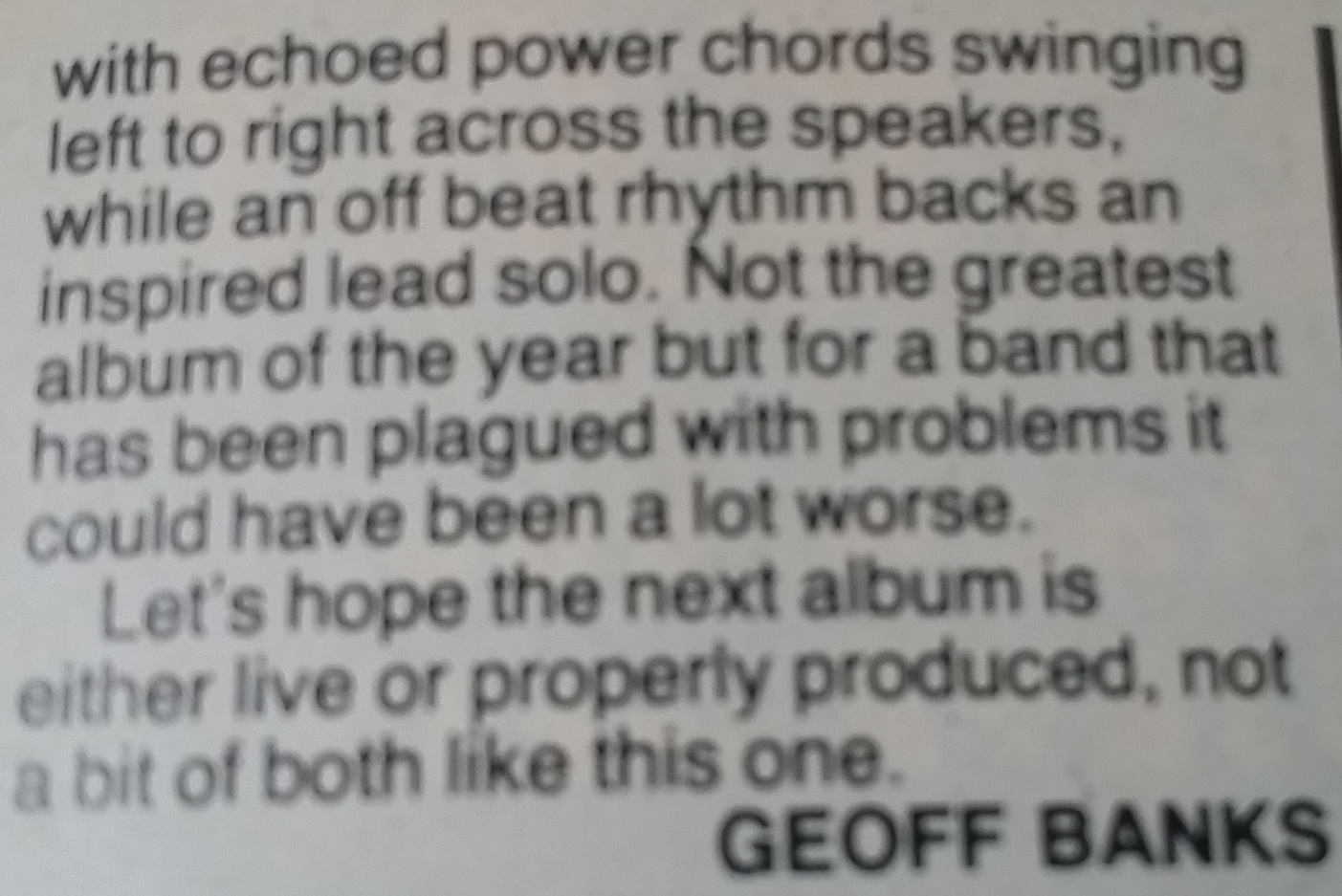 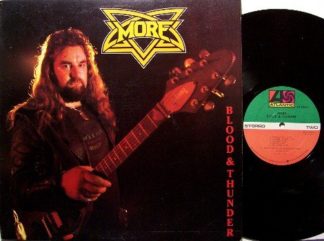