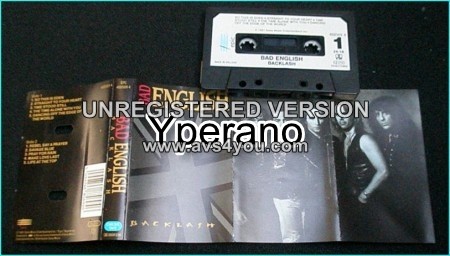 the awesome AOR / Melodic Rock supergroup BAD ENGLISH. Bad English second album “Backlash” is another terrific slice of pure US Melodic Rock AOR, and a must in your collection.Formed in 1987 by Journey guitar master Neal Schon, monster drummer Deen Castronovo and reuniting keyboardist Jonathan Cain (also Journey) with singer John Waite and bassist Ricky Phillips (his former bandmates in The Babys), the band’s self-titled debut exploded into the Melodic Rock scene (and the charts) in 1989.Ugh, it is hard for a band to create an album to follow up a No. 1 double-platinum-selling record, but Bad English did it. Perhaps not a huge seller, but artistically, “Backlash” is even superior to the brilliant debut.I remember a John Waite interview where he recall the creative process of “Backlash”. According to Waite, the band wanted to forget about commercial considerations for the second album, and of course, the record company wanted more hit singles.I think the band won, as while we have have very commercial songs on “Backlash”, for the most part there’s a more elaborated, focused material of offer here. Even more AOR than the debut album.“Backlash” may not have had the hit singles the Bad English debut did, but it was arguably the better of their two releases. The same arena-rocking blend of power ballads and melodic rock anthems is in place here, and if anything, Backlash is even more radio-friendly. Songs like “So This Is Eden,” the superb “Straight To Your Heart” (co-written by Mark Spiro) and “Life at the Top” hit just the right balance between guitar driven melodic rock and keyboard-drenched AOR, and even the ballads, the fantastic “Time Stood Still” and “Make Love Last” work really well, and without the ‘instant’ (or cheesy if you prefer) lyrics of the previous album’s big hit When I See You Smile.“The Time Alone With You” shows off John’s voice and writing ability, we have a haunting midtempo AOR pearl in “Savage Blue”, Journey best is represented with “Pray For Rain”, while the catchy “Make Love Last” (co-written by great guitarist Tim Pierce) round out a fabulous album.

I truly love Bad English’s “Backlash”, another terrific slice of US Melodic Rock / AOR from these incredible musicians.Produced by my favorite in this matter Mr. Ron Nevison – often accused of bass-less productions in favor of the melodic sheen – “Backlash” is another proof that it isn’t true; the drums kick, the bass lines are big and the overall sound is full.Yes, A MUST HAVE