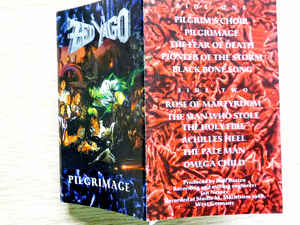 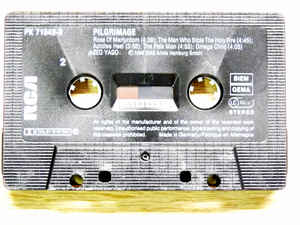 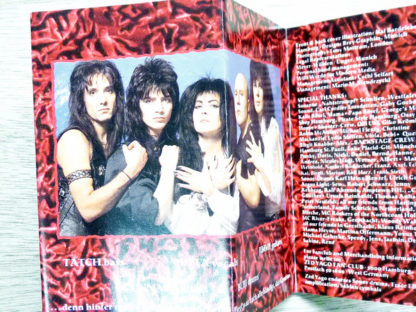 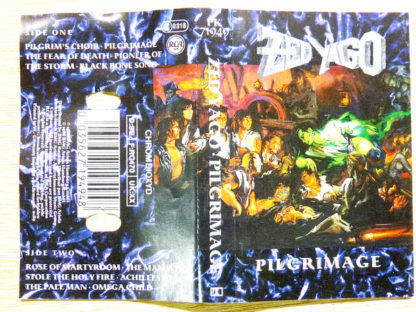 Pilgrimage is the second album from the German heavy power metal band Zed Yago, and in my humble opinion the very best work Jutta Weinhold has ever put her stamp on, with an unforgettable, epic vocal performance that absolutely destroys any other female fronted album of its type in the 80s. About the only thing that comes close here would be Leather Leone years fronting Chastain, but the fact that this act never caught on while the similar, and less impressive Warlock were able to tour much of the world is shocking. Not that Doro first success was anything to scoff at, but compare any of those records to Pilgrimage and shudder.

In fact, this is one of the best German metal albums of its type, with a wholly consistent set of breathtaking tunes that carry conventional but catchy melodies, strong guitar rhythms, the precise if primitive drumming of Bubi. It also the best example of ‘pirate metal’ I can think of outside of the gods Running Wild, as Jutta presents her concept of Zed Yago, the fictional daughter of the Flying Dutchman captain, who roams a world embroiled in both adventure and folklore. Weinhold had always expressed a desire to translate famous literary works into the metal realm. It was hardly a novel idea by the late 80s (Iron Maiden had been doing it for over a decade at that point, among others), but evidence that Zed Yago were not simply some stupid band screaming METAL THIS METAL THAT from the rafters. These compositions were built to last, long after the band dwindled away, reformed as Velvet Viper, and never again reached this level of excellence.

Pilgrimage is the best Zed Yago album in EVERY category. It was released through RCA, so for once, the band had some actual money to put into its production. You’ll notice the cover art here is actually quite stunning here, a painting of the ghostly lead character in their mythos sitting in some galley or tavern, in the presence of the band themselves (proof that Weinhold and Zed are separate entities, whereas some speculated she was trying to project herself into the character). Though its arguably the weakest point to this record, the production itself was still quite nice, with the typical 80s centrism on the vocal lines. Often on some stereos I feel the guitars get a little lost, which is a shame since they are so lovingly articulate at driving her voice through these forgotten tales, but on others I can hear them clearly. In all cases, the drums crash at an acceptable level and you can hear the bass tones as they thicken the storm, like the waves of an angry, stirred sea frothing at the hull of a wayward vessel.

The lyrics are not even remotely retarded. For example, compare this to any of Manowar 80s efforts, or Helloween, and you’ll quickly see how important the literary influence was to Jutta and the band. Granted, English is her second language, and they may not flow as pure poetry, but I reiterate, this was not a band crafting disposable pop metal for arenas. This was made to last, and its timeless craftsmanship has served me well for over 20 years! So close your eyes, drift off to a realm of fantasy, lightning cracked skies, ports of danger and mystery, and some vivid, rousing, passionate metal of the purest strain!

The “”Pilgrim Choir”” inaugurates the record, with some anthem-like German opera metal guitars that are joined by synthesized orchestration. You get the impression curtains are lifting upon some viking or sailor about to lurch into a searing soprano, and as the climax develops into an actual choral section, the guitar feedback rolls into the slowly but surely riffing title track. Graceful, careful melodies carry the day to the savage sounding chorus riff worthy of Rock’n’Rolf himself, while gang shouts erupt from the crows nest around :55. Few bands had this ability to play in such a relaxed pace, and yet still conquer you…the arabesque hymnal of the bridge that precludes the lead section is further evidence. “”The Fear of Death”” uses this slower pacing once more to superb levels of excellence, a tear jerking, descending melody that Jutta counteracts with a silken, seductive poise. I’m crying right now just listening to it for the millionth time! The things I endure to bring the truth to you folks. Call the foreign dimension finally to earth
More than we know appears in a dream
Disappears into space a taste of rebirth
Donâ™t, donâ™t want to be defeated no…
But we are, but we are in the second we are born…

Meaningful heavy metal in the 80s? Lies! Listen to the solo bridge, with the slowly churning, bad ass blues metal rhythm in the backdrop. Eat your hearts out, Schenker and Jabs! Jimmy and Gunnar were on fire! Following this emotional landscape, the band decides to pick up the pace through the light, digestible speed metal of “”Pioneer of the Storm””, with riffs just as tasty as anything you’ll find on the first few QueensrÃ¿che or Dokken LPs. Once more, the band crafts up a wonderful bridge of sweet leads across a great backing rhythm, and the lower guitar notes wailing off against the final verse is likewise immortal. This is followed by the timeless “”Black Bone Song””, which pays tribute to the damned crew of the Flying Dutchman from folklore. This is not my favorite track on the album, but it was probably the band best known title at live performances, with some simple, fist in the air guitars that strut proudly across the bow while Jutta serves up a killer chorus over the slyly inserted, busier axe melodies. She also pulls out some lower, rasping vocals here which show her ability to get down and dirty, and the crew shouts and moans here are pretty cool.

Congratulations, we’re still blessed to have over half the album left! “”Rose of Martyrdom”” is a majestic yet melancholic piece in which the sombering vocals really take the fore, melodic semi-speed metal licks resounding off in the distance. “”The Man Who Stole the Holy Fire”” has a nice little spin on a Zeppelin meets Def Leppard riff which totally stands out to memory, and “”Achilles Heel”” is a straight, perfect rocker which will easily appeal to a fan of Warlock, Saxon or other big riff 80s street metal, with an amazing, warlike gang chorus around 1:45. You have just had a sailor clog stuffed right up your rectum, but the band lets you down easily with a soaring bridge. “”The Pale Man”” is a slowly escalating power ballad which thankfully engages due to the vocal performance. Had Joey Tempest written this for a Europe record, it probably would have been huge. Alas, Jutta and crew were destined to wallow in obscurity. The remaining songs return to the harder rocking format, though lyrically they depart into other subject matter: the excellent “”Omega Child”” sounding like it would have fit in on one of Kingdom Come (highly underrated) early records, and “”Fallen Angel”” gallops at a similar pace as it tells the parable of some sinful divinity (I like to think it about Lucifer directly).

Despite all the cards it brought into play, Zed Yago Pilgrimage was unfortunately lost in a bad shuffle of the deck. 1989 was a busy year, with many bands’ careers steamrolling, and the wallets of so many fans already committed to the developing thrash metal titans of the US or the safer melodic power and late NWOBHM fare out of Europe. As such, Jutta Weinhold and her boys were not able to make the same impact as an Accept, Warlock, Helloween or Gamma Ray, and it a crying shame, since the band would lose their big record deal and she would then disband them. The ‘Zed Yago’ concept does not end here, of course, because Jutta and Lars would return with some new gentlemen for the very similar band Velvet Viper, but none of that incarnation output could match the grace and excellence of this sadly neglected slab of memorable mirth and melody. It not exactly ‘perfect’, for there are one or two songs slightly less impressive than the remainder (those songs would be “”Fallen Angel”” and “”Rose of Martyrdom””), but it an enormous improvement over From Over Yonder, and the fact that I still listen to an album so often today that most would consider ‘dated’ or ‘insignificant’ only proves its enduring quality.”