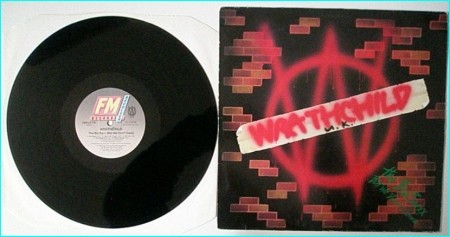 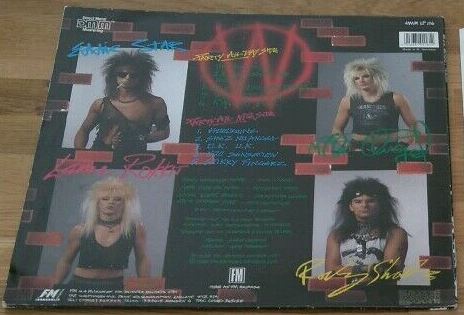 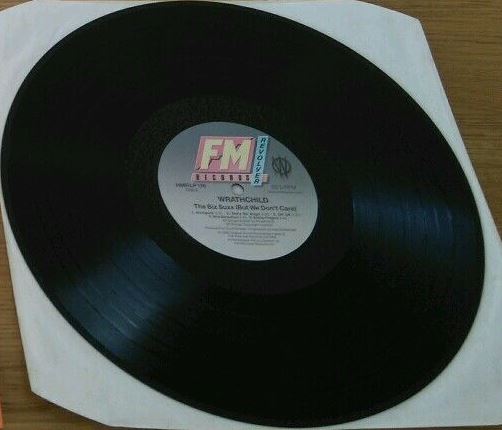 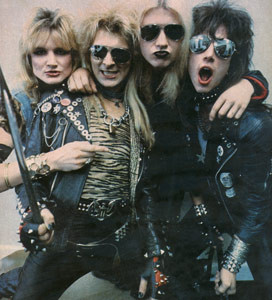 The cover art shows Wrathchild U.K. as the artist, but all over instances have just Wrathchild. Similarly the Spine lists the album title as just ‘The Biz Suxx’ but it is given in full in all other instances. The currency signs are only shown in the title of A2 on the sleeve.
————————————————————————————-
This is awesome! I loved Stakk Attakk but this blew me away. Their 3rd record (Delirium) is even better! Similar to 1st Poison & Pretty Boy Floyd. Rocky Shades (singer) is definitely not an ‘average Joe’ because I don’t know anyone who sounds like him, and sure the guitarist is no Eric Clapton but Lance riffs are some of the coolest sounds you’ll ever hear.
————————————————————————————-
For the uninitiated (and this includes those who don’t understand glam metal/cock rock or dismiss it as simple rubbish) what you need to understand is that we didn’t care that we couldn’t play ‘arpeggio sweeps in the pentatonic scales’ at a million miles per m.p.h. It was about the parties, the girls, the drugs (for some), and the fun. Not about who could play the better solos. It was about the song. That is why bands like Poison and Pretty Boy Floyd stole your girlfriends.
————————————————————————————-
Wrathchild (U.K.), along with the Tattooed Love Boys, and London Quireboys, were the British equivalent to the afore-mentioned bands. All makeup, hooks, and bringing the party. What intrigues me about is the blatant OI! and streetpunk leanings of bands like this. You need to look no further than the cover of Gary Holton Heavy Metal Kids song, he No Angel’ ably covered by.
————————————————————————————-
Michael Monroe on a solo album years later OR another great example being Slade. These guys weren’t the sissies you thought they were. They mostly came from tough working class backgrounds and found an escape and a way to attract the ladies. For this reason alone combined with the sheer catchiness of their songs: buy this motherfucker
————————————————————————————-
the songs made them fun at the time and even more fun today. Viva le glam metal and cock rock and I wish there were more of the same out there today.
————————————————————————————-
I was 15, going to the highschool and in spain everybody was listening to the fucking pop music.For me, Wrathchild uk were a revelation : coolest music iÂ´ve never heard before. I love this record. Try this one if you’re a real glam rocker
————————————————————————————-
WRATHCHILD UK kicked ass!! Millionaire and Ring My Bell rocks tall! Well budies, you all who like a great GLAM rock, will also have a good time with this one! BIZ SUXX is original, sleazy and KICK DAMN ASSES!!
————————————————————————————-
she no angel, was that song on the michael monroe ‘not fakin’ it?????i got that album but i believe it a total other song…i always thought they (wratchild) ripped that tune from the pretty boy floyd demos…it almost the same as rock n roll is gonna set the night on fire…anyhow, this is a pretty cool LP.
————————————————————————————-
Far superior to Stakk Atackk but band lost a lot of momentum between releases due to lengthy lawsuit! Better production & lightly’ more mature lyrics made for a completely revamped version of the band! All time classic of the glam genre! “”Ring My Bell””, “”She’z No Angel””, and “”Nukklear Rokket”” are my favorites. I think they were edgier than Poison, or Pretty Boy Floyd on this album, but it hard to see this album as popular in the American psyche as albums like THEATRE OF PAIN and LOOK WHAT THE CAT DRAGGED IN were. “”15 Millionaire $$”” is a cool song. Has a nod to the Tubes in parts, vocally. So far, I think DELIRIUM is the album where they were really hitting their stride.
————————————————————————————-
This had a much better production, maturity and catchyness to it than Stakk Attakk. It was my first Wrathchild album, and as much as I like Stakk Attakk, I don’t think I would have been so eager to buy the bands other albums if that had been my first experience of the band. I would put this as the one I would recommend people to listen to first, then Delirium and Stakk Attakk.

————————————————————————————-
Top songs: ‘Nukklear Rokket’ and the title track, ‘Hooked’ has some Vince Neil type of vocals that get quite animated by the end of the track, ‘OK-UK’ has a ‘Rockin in the USA’ by KISS blue-print stamped all over it lyrically. ‘Wrathchild’ were moving a way from their Great British-ness and competing with the likes of Poison.
————————————————————————————-
Wrathchild (sometimes known as Wrathchild UK in the United States due to a naming conflict with Wrathchild America) were an English heavy metal band. Formed in 1980, the group was an early band of the glam metal genre, starting off about the same time as bands of the genre such as Motley Crue. They are indeed the “”Godfathers”” of the glam/sleaze metal movement back in the early 80s.
In their home country, the bands speciality was in its D.I.Y. aesthetic (common for many NWOBHM bands), over the top stage shows, and striking image. During their early days, they would often play in pubs but still used confetti, pyrotechnics, and dressed in full glam metal gear, including their trademark platform boots and huge, teased hair.
Wrathchild was formed in 1980 in Evesham, England by Marc Angel and Phil “”Wrathchild”” Vokins. They recruited Rocky Shades for lead vocals, and Brian “”Thunderburst”” Parry on drums. Phil Vokins left in 1981 to join Bill Ward (Black Sabbath)in America with a new band Max Havoc and Brian Parry left and returned to his hometown of Chester.
The band soon added two members from the band Medusa; guitarist Lance Rocket and drummer Eddie Star who became mainstays in the band and completed the much recognised over the top lineup for a decade of touring and recording.
After releasing a string of demos, such as Mascara Massacre in 1982, the band was offered a record deal by Bullet Records. On this label the group put out their first official release in 1983, an EP called Stackheel Strutt.
In 1984, the band recorded and released their debut studio album, Stakk Attakk. It would spawn two singles; a cover version of the Gary Glitter classic “”Doing Alright with the Boys”” and “”Trash Queen””.
Unfortunately, just as Wrathchild was garnering success, they came embroiled in contractual problems with their label, Heavy Metal Records. RCA Records, a major label, unsuccessfully attempted to sign the band from Heavy Metal Records in an effort to free them from their contract. Meanwhile, the group released a video War Machine in 1984.
After finally settling the dispute with Heavy Metal Records nearly four years later, the band released their second album, The Biz Suxx, in 1988. The album spawned a single, Nukklear Rokket, which had a promotional video that was produced by Bruce Dickinson of Iron Maiden. Bruce plays the protester in the video whilst the performance was filmed in the car park at his home in Chiswick. Ron Kennedy directed and edited the video as well as appearing as the mad professor. Steve Prior was the cameraman.
The band third and final studio album, Delirium, was released shortly after in 1989. It featured Grim Reaper Steve Grimmet on backing vocals. Soon after the release Rocky Shades left to join the punk band Discharge and with the onset of grunge, Wrathchild broke up.

Be the first to review “WRATHCHILD: The biz suXX but we don’t care LP 1988 Excellent condition. Check video and audio.” Cancel reply 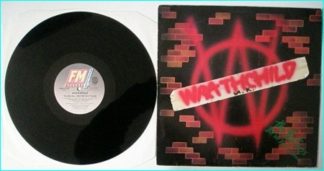 You're viewing: WRATHCHILD: The biz suXX but we don’t care LP 1988 Excellent condition. Check video and audio. £7.00
Add to basket