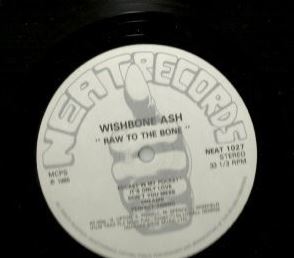 Raw to the Bone is the thirteenth album by rock band Wishbone Ash. Like its predecessor, Twin Barrels Burning, it is one of the bands heaviest records, capitalizing on the popular New Wave of British Heavy Metal that Wishbone Ash had helped influence.
It is the only Wishbone Ash album to feature Mervyn Spence on bass and vocals. It is also the last album with guitarist/vocalist Laurie Wisefield, who ended his eleven-year stint with Wishbone Ash after the release of this album.

Wishbone Ash get to the point
The Ash pull out all the stops here. Instead of the elongated and dull workouts of early releases like Argus this set of tunes find the band getting to the point. These songs have some heft, the guitar work is cool and the band fill the sound spectrum more fully.

This is a more mainstream approach, and less esoteric subject matter helps connectivity. New singer,bassist Irishman Mervyn Spence from Trapeze who replaced Trevor Bolder, Spence had a really good voice. A (slightly) tougher stage image also shows the affect of the boys having lived through the NWOBHM. Also appearing at more ‘rock’ events like the Loreley Metal Hammer Festival shows the band attempting to garner some street credibility.

Personal faves would include lead cut, Cell of Fame which touches on the pitfalls of success. Rocket in my Pocket is slightly funky and Don’t You Mess has a pleasant groove. Great song in “Cell Of Fame” and the thunderous “Its Only Love”.

Perhaps the most accessible Ash studio album and that means its perhaps a good place to start for the newcomer.

This smart and vibrant follow-up to “Twin Barrels Burning” showed Wishbone Ash could easily add more commercial strings to their bow.
Not that there’s anything here that will be regarded as an instant classic, but with so any radio-friendly hooks on display every track will get feet tapping and heads nodding. No song is stretched out, each last just as long to make an impact and then moves smartly out of the way. “Dreams (Searching for an Answer)”, “Love is Blue” and Little Feat pitched “Rocket in My Pocket” combine Mervyn Spence’s exceptional vocals, prancing bass lines and simplistic guitar licks plastered all over the place. In addition, there are two potential hit singles: “People in Motion” melts that deliciously vague guitar riff with a euphoric refrain melody, and “Cell of Fame” has all the confidence of slickly executed arena rock and one of those hooks that you can’t help but sing along to.