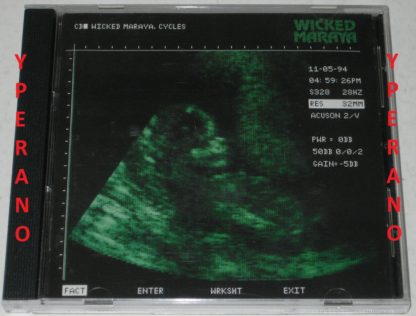 THIS IS A 1994 MAUSOLEUM RECORD RELEASE (PROMO)

“The basic sound is very reminiscent of Queensryche and Nevermore mixed together, except a lot darker. In fact, this album has a very brooding, shadowed atmosphere throughout all eleven songs, but that never becomes a detractor; I think the ominous sound just adds another shade of uniqueness and quality to it. There also may be some Crimson Glory in there for those apt enough to notice it, such as in the elegant guitar leads, and that can never be a bad thing. Unlike all those bands, though, the songwriting of the album has a very minimalist representation. Rather than shredding or having numerous complex riffs, Cycles tends to have a more simplistic approach, going from verses to choruses somewhat predictably”.

“In this case, however, I think that simplifying is better than going all out, because with the strong, melodic, and altogether catchy choruses, adding a bunch of progressive midsections and ridiculous intros and outros would prolong a working formula. The best thing about the bands songwriting is that they know when to keep it simple.Check this out if you’re devoid of a faint heart, because this is practically the definition of a hidden gem”.

REVIEW:
“A dark, churning fest of pure metal bliss, Wicked Maraya blends crucifying riffs with smooth, hallowed wails, to make this quite the pure and atmospheric metal experience. The band would later change their name to simply “Maraya”, but the Wicked certainly applies here.
Coming through as a slower, more methodical Nevermore at times, with strains of ‘Mirror Black’-era Santuary being prominent as well. The vocals go from an occasional Geoff Tate (Queensryche) reference, to the more apt pipes of a Warrel Dane. Not to be taken lightly, as the songs blister right to the point (most clocking in at or under four minutes), blending biting staccato vox with the bands riff-a-minute style.
Prepare to get an eyefull (and an earfull once you get the disc), as every song is a standout. “Another Day” starts the madness with a dark riff, and the song proceeds to weave its way through stages of calm and heavy. “Jacobs Dance” begins with a majestic and evil riff and vocal procession, spewing the slow and churn sounds of a more sanctified Iced Earth. “Face in the Mirror” features a soaring chorus, and is built around yet another mind-boggling and all-powerful axe-mark.
Check out the Facelift-heavy opening smash of “Winters Garden”–pure iron delight, as its as thick and heavy as you want. A groove chorus that keeps the head moving, and shades of Queensryche show the bands depth. “Sign of Heaven” is a definite fave, as a slow, boiling chug and bass thump pave the way for a wailing chorus. Listen to those cymbals open up after the chorus! This is a band that knows how to play, and knows how to work a groove. “The Legacy” has a stutter riff straight from the depths of the almighty Priest, but Maraya blends it into a sound all their own. Excellent use of the overlaying clean guitar, giving a glipse of ‘Burnt Offerings’… The pre- solo groove–steady!!
I could go on, but the point should have been made. The riffs are inventive, but more just plain powerful than flashy. The band rocks pure and simple, but isn’t afraid to pull off a bit during a song for an even stronger effect a little later. Power technical crunch at its best”.

Wicked Maraya was an uncompromising metal band during a time when grunge was king. Their style simply defied all attempts at classification. This wasn’t hair metal, or thrash, or power metal. It was just…metal. The closest point of comparison may be another American metal band that was starting out at about the same time – Nevermore.

Cycles had plenty of heaviness. It was melodic, but not overly so. The guitarist was talented but not pretentious. And the vocals walked that fine line between melodic and aggressive and just fit the music perfectly. All of the songs are quite well written.

This is one of those albums that few people have heard of, yet one every metal fan should own. Like the early releases by Warrior Soul, Cycles is an album that defies expectations and is a true original.

The band would later change their name to Maraya and adopt a more “modern” sound, but it just wasn’t up to the standard set by Cycles.
———————————————————-
90s metal at its best
I got this album years ago in either 1994 or 95 and it represents all that is metal… The band looks, feels, and plays the part. I recommend this to all you metal heads still livin’ the lifestyle because its nostalgic and makes me happy that people made this kind of music once.
———————————————————-
A mid-’90s metal classic
Over 15 years have passed since the release of 1994s “Cycles,” the sole full-length from Long Island, New Yorks Wicked Maraya, and it has aged remarkably well. I probably would have never heard it had I not been involved in a college radio station at the time that received this CD as a promo. I recall one of the many stand-out tracks here, “Resurrection,” being played to round out a year-end top 15 list of the best albums of 1994. I also remember sometime in ’95 cranking this one in the car on my taped copy from the radio station original when transporting relatives to and fro, all of whom are no longer with us. Ah, memories… Has it really been a decade and a half already?

This earns a five star rating simply because there’s not one weak track to be found here. This is progressive power metal with great emotive vocals and an excellent production courtesy of Tampas Morrisound (a studio which was popular with many a death metal band in the early ’90s).

“Resurrection” again is a real classic, complete with a chorus that is to die for. I could easily have seen a video being made for it had these guys been given the airplay they so rightly deserved. “Sign of Heaven” has a great chord progression and guitar/vocal interplay that makes it bear into your mind for long after playing. My absolute favorite track, though, is “Alone.” Its a fast, driving power metal anthem with a brilliant riff. It stands up to any New Wave of British Heavy Metal speed metal tune from the past.

All in all, a fine album. I’m so glad it hasn’t gone out of print and that you can still get it here on Amazon. These guys should have gotten so much bigger than they did, by the strength of this album, but justice isn’t always done in the music business, now is it. A classic for its time; highly recommended for fans of quality progressive metal.