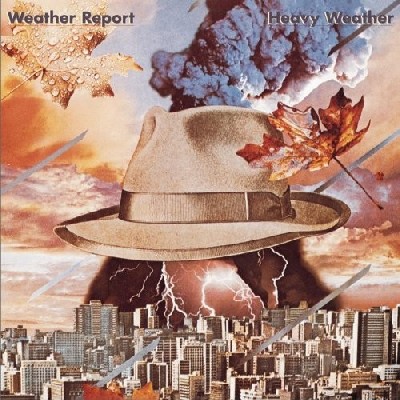 While waiting to record his own debut, Jaco Pastorius had attended a Weather Report gig in Miami. Afterwards he accosted frontman keyboardist Joe Zawinul, and told him they’d be better with him in the band as he was the greatest bass player in the world. Zawinul has said he told him to “get the fuck out of here”, but when Pastorius left a demo at his hotel room the next day he realised the young man had a valid point. Heavy Weather, the group’s eighth album and second with Jaco, gave them a new commercial clout, and Birdland became a jazz classic. Rolling Stone remarked that whereas their music previously “only went up and up”, Pastorius’ “busy, talkative” style gave them “a new bottom that makes all the difference in the world”.

Heavy Weather is the eighth album by Weather Report, released in 1977 through Columbia Records. The release originally sold about 500,000 copies; it would prove to be the band’s most commercially successful album.

“Heavy Weather” is a true classic, and highly enjoyable. Despite the inclusion of a few head-scratching tribal chants that starkly contrast with the sensational music found on “Birdland,” this record is extremely accessible and contains a wealth of great material. Ignoring the fact that the album is a landmark recording in jazz, “Heavy Weather” is simply a masterpiece from any objective measure. It contains not just one, but two original jazz classics in the songs “Teen Town” and “Birdland.” The lovely “A Remark You Made” rounds out an excellent first half of the record, showcasing soulful and evocative saxophone accompaniments by Wayne Shorter. While Jaco Pastorius’ excellent bass is not quite at the forefront of the sound on this bombastic record, the balance he achieves with the instrument is both memorable and magical.
“Heavy Weather” is a behemoth of a record, and demands full attention from the listener. It is a work of loud, joyful, compositional genius. “Birdland” is a masterful statement of intent by Weather Report; an uncompromising and engaging instrumental track, this song is easily one of the highlights on the album. The only real weakness on “Heavy Weather” is the inclusion of “Rumba Mama,” a throwaway drum and vocal track.

Atmospherically, the tone becomes lighter on songs like “Palladium” and “The Juggler,” while retaining the excellent production found on the first half of the record. This album is definitely a more commercial affair than “Black Market,” but is still a captivating and enchanting listening experience. Despite its innocuous fadeout into mellow arrangements after a bombastic first-half, “Heavy Weather” is uniformly excellent.

Overall, this is a very fine album that is memorable and engaging. It will always have a place in my collection of music, and I think that it is a record with a wide range of appeal that almost anybody could enjoy. I highly recommend “Heavy Weather” to anyone, regardless of musical preferences and tastes.