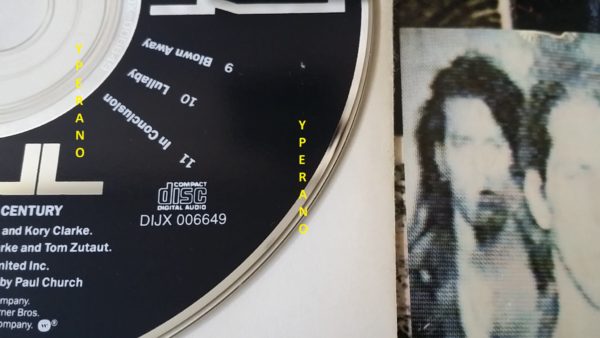 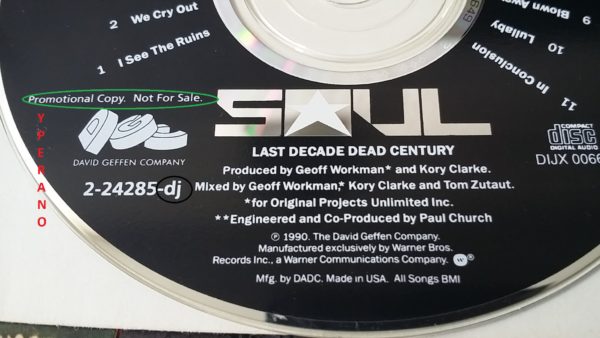 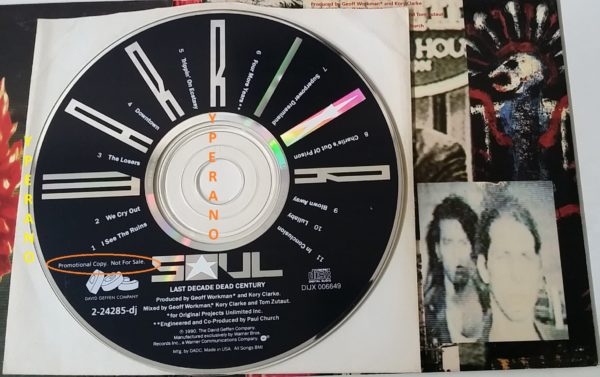 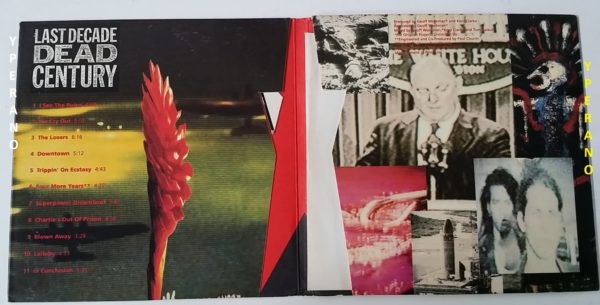 THIS CD WAS MADE IN ULTRA LIMITED QUANTITY 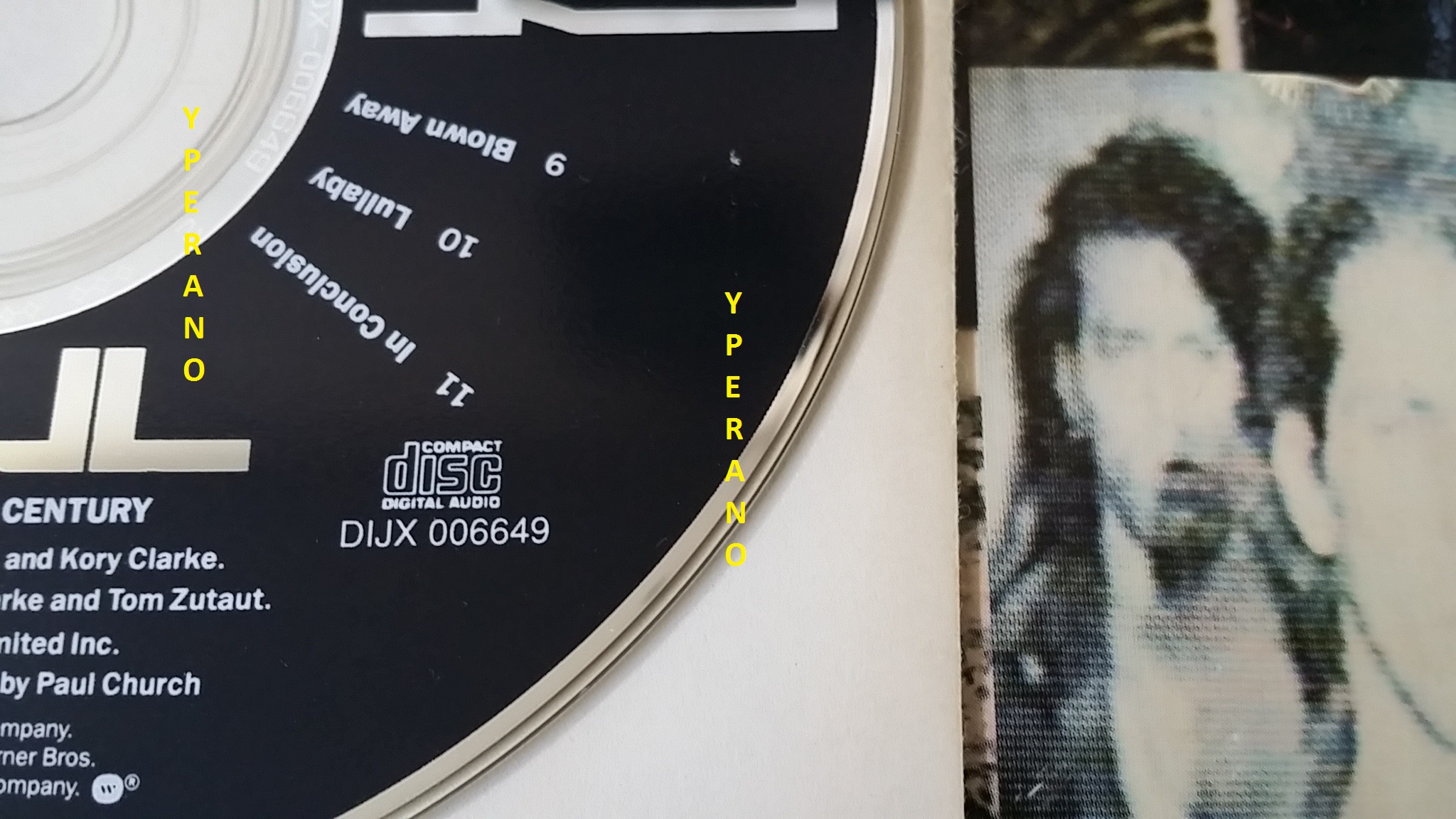 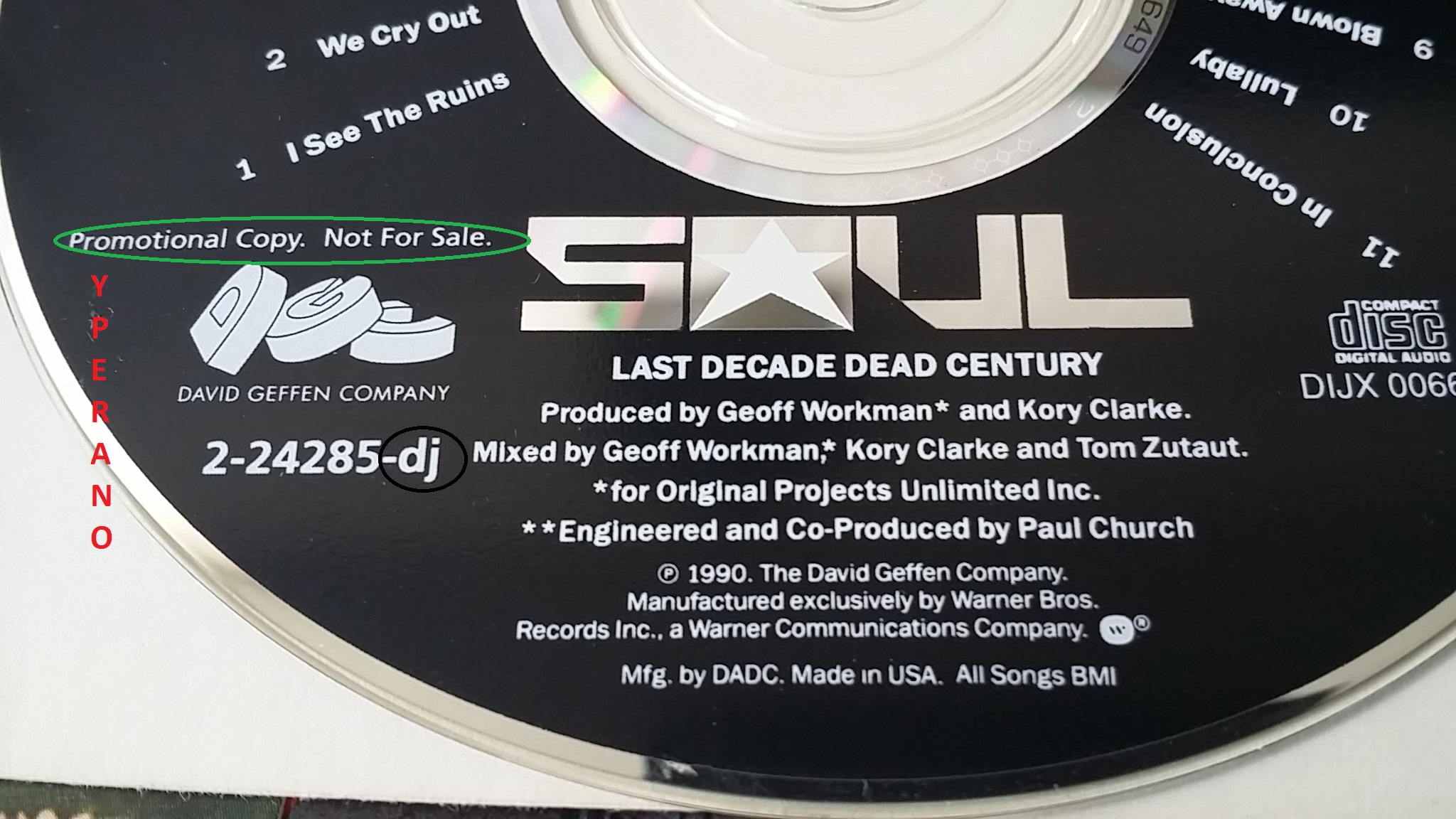 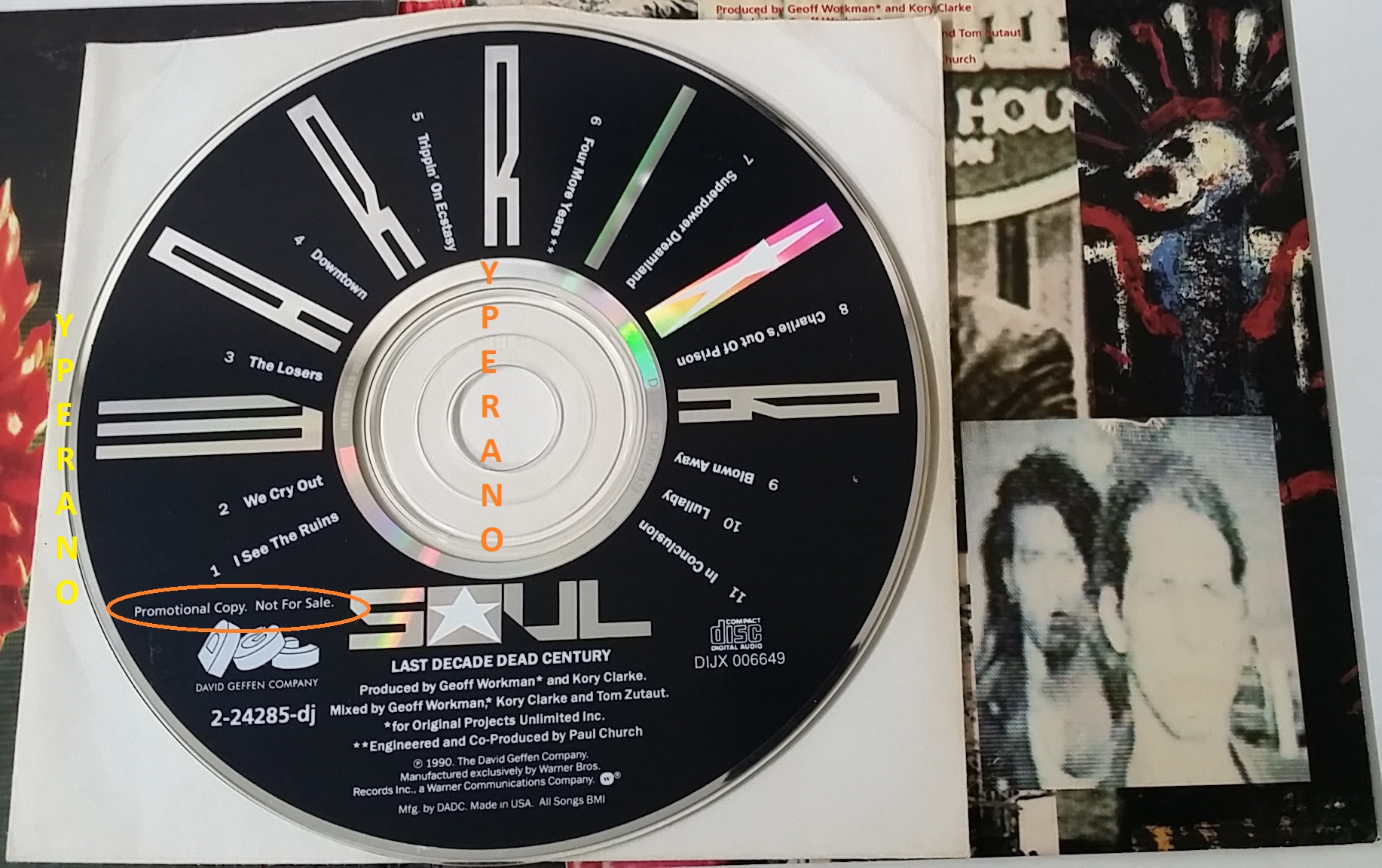 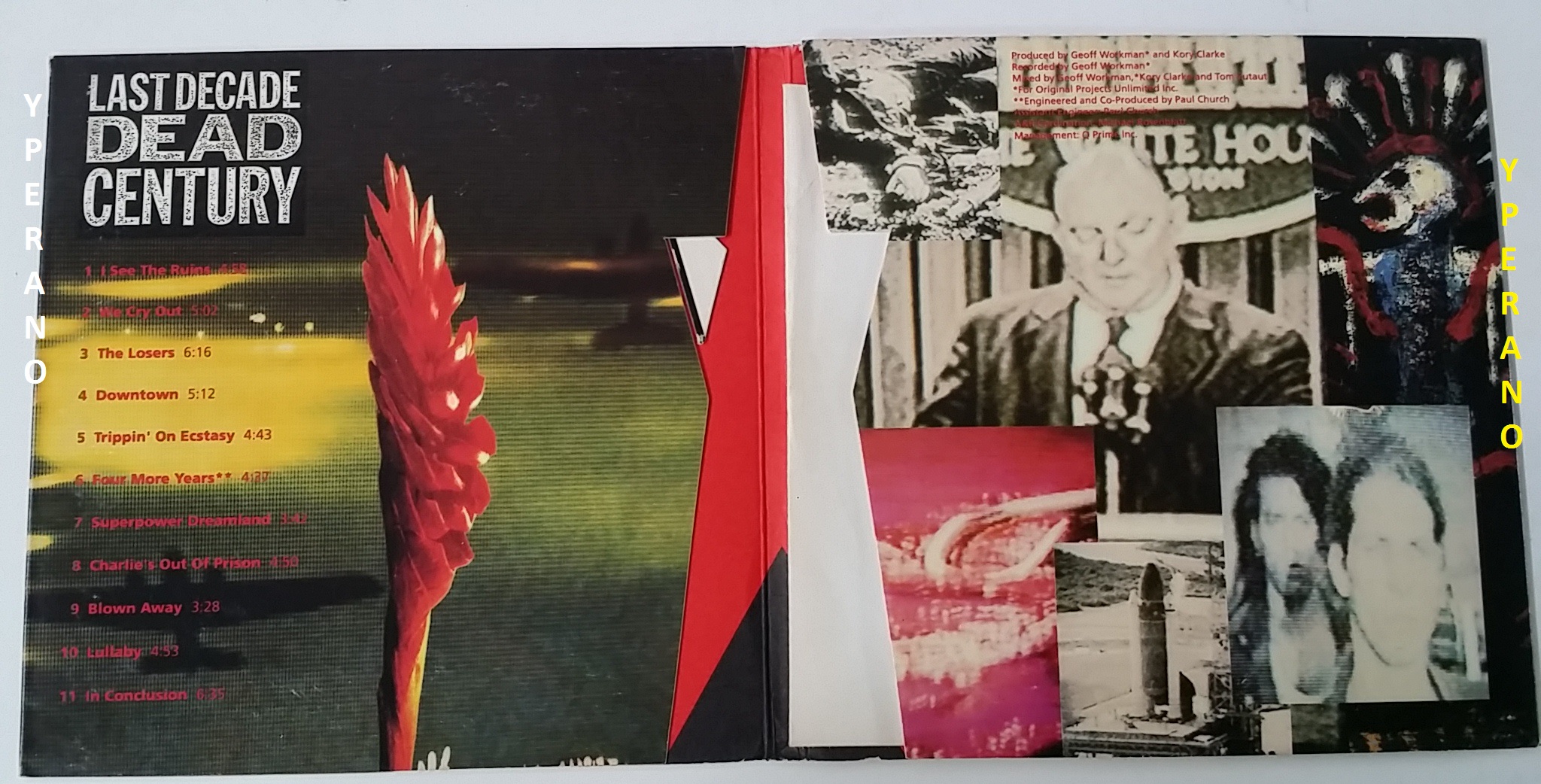 5.0 out of 5 stars Great CD
This was one of the best CDs I own by a band that never hit the mainstream. Every song is a solid play, too bad they never got the recognition. BUT, as I post this, I heard their music via digital cable on the Heavy Metal channel. Kids, if you’re a fan its still out there! Metal will live again.

5.0 out of 5 stars This is THE ONE!!!,
This is one of the best albums ever recorded. Any band should want to KILL to write 1 song in their whole career as good as any on this album. It is a true crime that this band never got recognition that they richly deserve

5.0 out of 5 stars One word: WOW!!!!!,
Kory Clarke really hits home w/ Warrior Souls debut disc! I’ve had this disc since the second day it hit the shelves and listen to it still at least 3 times a week (along w/ the other Warrior Soul CDs, except Chill Pill…. which I wasn’t impressed by). I haven’t heard Space Age Playboys (either the disc, or Korys new band), but I’m upset that hes no longer doing Warrior Soul!! These guys didn’t get enough recognition for the songs they did! This disc is a definite add-on to your collection! I highly recommend it (along w/ their other discs)

5.0 out of 5 stars Guns N’ Roses wish they made this album,
Released in 1990, LAST DECADE DEAD CENTURY was Warrior Souls debut album. They recorded four more cds before disbanding in 1995 (although they regrouped in 2006).

Warrior Soul played a style of rock/metal that was incomparable; they avoided the trappings of glam metal but couldn’t be classified as grunge or metal either. They were from New York City and fittingly had an unmistakeable urban vibe and hip attitude. The closest comparison I can think of would be Guns N’ Roses; the main differences being that the songcraft is simpler and frontman Kory Clarke doesn’t have a high voice like Axxhole Rose.

Speaking of Kory, he was largely what made Warrior Soul stand out. He has a mid-range voice full of spunk and emotion. He would adjust to the needs of the song as any great vocalist should; hence, he never came across as one-dimensional. His vocals would either soar over the music with attitude and grit or hauntingly float with deep feeling.

Every now and then the stars align and just the right mix of people with the right chemistry come together at the right time to produce the perfect recording or a series of perfect recordings. A few good examples include My Dying Bride TURN LOOSE THE SWANS, Death SYMBOLIC, Mind Over Four THE GODDESS, Bathory HAMMERHEART and Agalloch THE MANTLE. Well, believe it or not, LAST DECADE DEAD CENTURY belongs in this hall of masterpieces.

Its kinda useless to cite favorite songs because this is the type of cd where you just press ‘play’ and enjoy but, if pressed, I’d say my favorites would include The Losers, Downtown, Charlies Out of Prison, In Conclusion, We Cry Out and the quasi-ballad Lullaby. You can hear some of these on Youtube if you wanna check ’em out.

The only negative I can voice about this cd is that there are a few overt references to illicit drug use, which may turn some protential listeners off, but if you can overlook it this is a magnificent album — not to be missed.

5.0 out of 5 stars If you’re feeling angry – this is what the doctor ordered,
This is one of those releases that, when you hear it for the first time, it either sends your motor into overdrive or it kills you.

The creative force behind this record is one hell of an angry man. The record oozes with rage, but for all the anger in there its still musically very controlled. There is a very strong melodic vein running through every song. This is also ‘heavy’ in more than the usual sense.

Lyrically theres no beating about the bush. Straight to the bone with many a moment for a good dose of sarcasm, irony etc.

The great thing about this record is that there is nothing going on to try and sway’ the listener. Its just Kory and the band providing their own particular view on things through some great Heavy Metal. In spite of the group members punk roots, this album is a Metal album.

This is a classic CD. There is a lot that I could highlight but ‘In Conclusion’ and superpower Dreamland’ (such a good title!) have always been two of my personal faves.
Feeling the need to let off some steam? This is for you.

5.0 out of 5 stars Groundbreaking. One of the centurys best.,
A band way ahead of their time. They’ve got it all, powerful sound, message, and music. Excellent vocals, and expert guitar.

5.0 out of 5 stars amazing,
WOW, THIS IS ONE OF MY FAVORITE CDs OF ALL TIME. IF ANYONE FROM THE BAND READS THIS PLEASE HELP A MUST FOR ANY KILLER HARD CORE ROCKERS COLLECTION P.S. GUYS GET BACK TOGETHER

5.0 out of 5 stars Love this band,
I seen warrior soul open for Queensryche on the empire tour at the longbeach area, around ’91 or 92. I was 19 or so and stationed at the naval base in Longbeach, terminal island. I was just blown away by these guys, they were far better than queensryche. Queensryche was doing three shows, I went to the first or second show, and scalped a ticket for the last night, just to see warrior soul again………..been a die hard fan ever since.

5.0 out of 5 stars KILLER DEBUT,
LAST DECADE, DEAD CENTURY IS A MUST HAVE. IF YOU DON’T OWN THIS WHY!!!!!!!!!!! IF YOU LIKE ROCK AND ROLL IN ANY KIND OF FORMAT THAN THIS CD SHOULD OF BEEN IN YOUR COLECTION SINCE 1990 ~ DO YOURSELF A FAVOR AND BUY THIS WARRIOR SOUL CD AND START MAKING UP FOR LOST TIME. KORY CLARKE WROTE SOME KILLER LYRICS. EVERY TRACK KICKS ‘THE LOSERS’ SHOULD BE A STAPLE IN EVERY ROCK FANS DIET. GO CHECK YOUTUBE FOR A FEW OF THEIR VIDEOS!!!! HATS OFF TO KORY, JOHN, PETE & PAUL FOR A KILLER DEBUT. “HEREs TO WARRIOR SOUL CAUSE I THINK YOUR BEAUTIFUL NO MATTER WHAT ANYONE SAYS”

5.0 out of 5 stars Sonic Rawk!,
Why is it that every time I sit down to write a review of one of my favorite bands/records I always seem to be using words like coulda/shoulda/woulda? As in…Warrior Soul coulda been a monster band…Kory Clarke shoulda been a gigantic rock-star…and this record woulda done better if Geffen Records had stopped giving massive amounts of $$$ to Axl Rose & Co. and payed just a lil’ more attention to other deserving bands like Warrior Soul. Warrior Soul weren’t the only band to be given a raw deal back in the day (Junkyard, Sugartooth, Mindfunk, etc.), but they certainly were one of the best. And this debut record proves it!

Kory Clarke, from Detroit City, moved to NYC and began giving spoken-word performances on the Lower East Side after drumming for Detroit band, L7 (not to be confused with the all-female L.A. band). Soon, he had formed a ferocious, political, powerful, drunk, stoned & wholly-original band called Warrior Soul.

Rounded out by John Ricco on guitar, Pete McClanahan on bass & Paul Ferguson (Mob Research) on drums, they released this 11-track beast back in 1990. It was re-issued a few years ago on Escapi Music with 3 live bonus tracks. “Downtown” says everything you need to know about this band & is one of the greatest rock songs ever layed down on tape. “Trippin’ on Ecstasy,” “Superpower Dreamland,” and “Blown Away” do indeed blow you away. Like getting punched in the gut, you can’t listen to this record without having a fist clenched & raised to the sky. Theres a couple of psycho rants by Mr. Clarke and some experimental sounds deep in the mix. This record is punk. This record is metal. This record just flat out rawks! BUY IT!!! NOW!!!