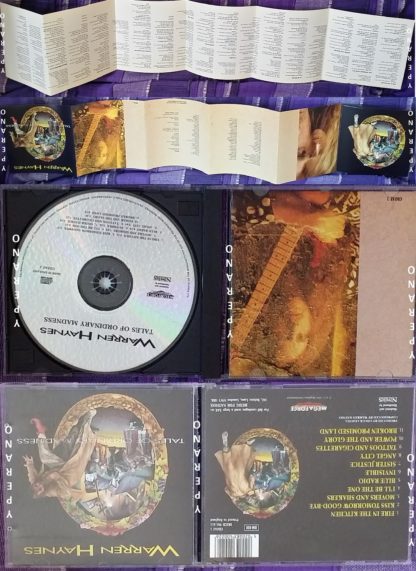 Produced by Chuck Leavell, Warren Haynes’ first solo album is a refreshing change of pace from his work with the latter-day incarnation of the Allman Brothers Band. Although the feel of this album is undeniably classic rock, with much of Frees bluesy swagger, it is also vaguely reminiscent of ’80s rock at times (check out the Mr. Big-esque verse to “Fire in the Kitchen”). The focus on Tales of Ordinary Madness is clearly on Haynes’ songwriting chops. For the most part, the songs on this record are tight and concise, focusing on immediate riffs, gritty vocals, and cool arrangements to sell them. This, however, is not to suggest that Haynes has stopped tearing it up with his guitar, and he amply demonstrates why he is one of the most lauded straight-ahead rock lead guitarists of the ’90s. The various bands that back up Haynes are all quite good, and notables Bernie Worrell and producer Leavell both make guest appearances on keyboards. Standout tracks include the mid-tempo “Tattoos and Cigarettes,” which is a great showcase for Haynes’ under appreciated vocal talents. The smoky “Blue Radio” is also notable for the artists emotive singing. In fact, the most exceptional thing about Tales of Ordinary Madness is his vocal performance, the overall impact of which stays with the listener far longer than any particular song or hook. There are some slow moments on this record, but it is great party music, and fans of Haynes’ work with the Allman Brothers Band would surely be interested in this recording.

5.0 out of 5 stars Real Passion
The passion in each song is obvious throughout the album. From the off beat sound of ‘Blue Radio’ to the hair on your neck raising ‘Tattoos & Cigarettes’ this is a must have album

5.0 out of 5 stars Tales of ordinary madness. Warren Haynes
Utterly amazing album. Everyone should have a copy Southern rock reached its peak popularity during the Carter years but stopped on a dime in the Eighties. Now it’s back in full force just as another Southern Democrat settles into the White House. Lynyrd Skynyrd recaptures its trademark hard-rocking sound with The Last Rebel. The Kentucky Headhunters reunite with old friends for a third album, Rave On!!, that proves they were rockers all along. And Warren Haynes steps out of the Allman Brothers Band to release a powerful solo debut, Tales of Ordinary Madness.

Skynyrd was poised on the edge of superstardom when a tragic plane accident killed group leader Ronnie Van-Zant and guitarist Steve Gaines in 1977. The refurbished band, bolstered by a reunion with original guitarist Ed King and the addition of the youngest Van-Zant brother, Johnny, demonstrates astonishing resilience in conjuring up the Skynyrd spirit on The Last Rebel. Van-Zant, once overshadowed by his brother’s legend, has grown into his role as front-man and carries the torch without being singed by its falling embers.

As ever, the cornerstone of the Skynyrd sound is Gary Rossington’s guitar. In a band inspired by the Rolling Stones, Rossington plays Keith Richards, laying out brash, textured rhythm leads that provide the ground for the other players to spark off. Rossington and King are in raging form, from the familiar good-time strains of “Good Lovin’s Hard to Find” to the stark finale, “Born to Run.”

Skynyrd was a party band in concert, but there was also a darker undercurrent in Ronnie Van-Zant’s lyrics, one derived not just from the traditional rebel angst of the deep South. Van-Zant mythologized the rural American outsider, and most of his fans, from Florida to upstate New York, knew he was talking about them. Johnny takes this stance further into furious nihilism. The world he writes about in “Can’t Take That Away,” “The Last Rebel” and “Kiss Your Freedom Goodbye” is closer to Megadeth than to Ronnie Van-Zant, whose experience was defined by the Sixties. Johnny, who came of age in the Eighties, dares you to compare him to Bruce Springsteen by titling a song “Born to Run.” But there is none of the American escape fantasy of the Springsteen epic in this tune – Van-Zant is running not to a better place or even away from a dreaded one but into the teeth of a world he identifies as the enemy and intends to fight to the death.

The Headhunters take the opposite view on Rave On!! – these guys are too busy having fun to be mad at anybody. Vocalist Mark Orr and bassist Anthony Kenney, who were in the band in its hard-rock days before it went country, are back and kicking for all they’re worth. The songs offer variations on the theme of playing roadhouse rock in the kind of small-town joints in which the Headhunters learned the trade. The band is jumping and the people are drinking in “Dixiefried.” The Crossroads bar is the setting for “Just Ask fo’ Lucy,” who turns out to be the life of the party. More wild times are promised in “Honky Tonk Walkin'” and hoped for in “Redneck Girl.” Even “The Ghost of Hank Williams” gets into the act, urging the band on from the sidelines. Richard Young evokes his own regional mythology, but his Kentucky-Tennessee vistas aren’t scarred by the deep passions of the Sunbelt: “There’s always a party down in Celina, Tennessee,” he notes. Young and Greg Martin provide a lively dual-guitar conversation throughout what sounds like a hell of a blueprint for a summer concert tour.

Warren Haynes’s virtuoso guitar playing helped bring the Allman Brothers back to life, but on Tales of Ordinary Madness, he showcases his talents without relying on the Allmans’ formula. Backed by a gallery of session stars led by producer-keyboardist Chuck Leavell and featuring percussionist Marc Quinones, keyboardists Bernie Worrell and Johnny Neel and saxophonist Randall Bramblett, Haynes reveals himself as an expressive songwriter equally adept at melodically exquisite Jimi Hendrix-influenced ballads like “I’ll Be the One,” “Angel City” and “Broken Promised Land” and blasting rockers such as “Fire in the Kitchen,” “Kiss Tomorrow Good-Bye” and “Power and the Glory.” On the funk strut “Invisible,” Haynes shows off the superb slide technique that has made him so invaluable to the Allmans. Many of the songs on Madness fade out on intense guitar solos after hurtling along for six minutes or more, indicating that Haynes is clearly in line to join the pantheon of rock’s guitar heroes. (RS 657) 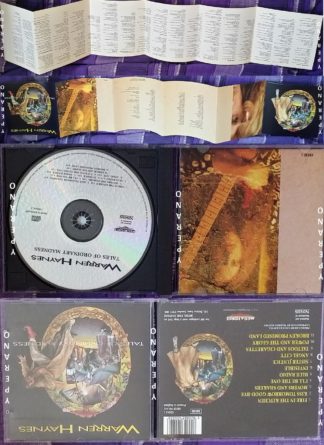