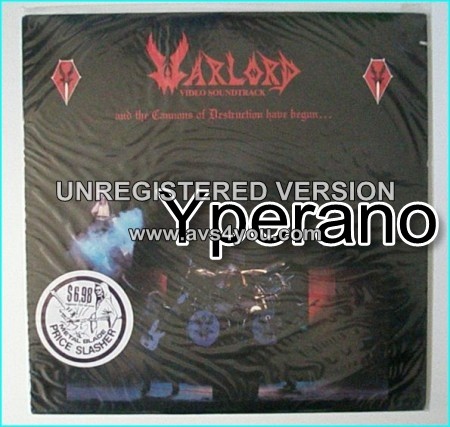 Warlord – …And the Cannons of Destruction Have Begun (1984)

Warlord was an American heavy metal band, formed in 1980 and based in Los Angeles, CA.
The brainchild of guitarist/songwriter Bill Tsamis and drummer Mark Zonder, who had made their way down from San Jose, CA to Los Angeles, Warlord caught the attention of fledgling record company owner, Brian Slagel, whose label, Metal Blade Records, had recently issued Metal Massacre, a compilation featuring up ‘n coming local metal bands such as Malice, Steeler, Ratt, and Metallica. An aficionado of the New Wave Of British Heavy Metal and admirer of the European metal aesthetic, Slagel was impressed by Warlord epic, semi-progressive style inspired by such diverse acts as Rainbow, Angel Witch, and Jethro Tull. Slagel decided to offer the band a spot on his next compilation and Warlord would make their vinyl debut with ‘Lucifer Hammer’ on 1982 Metal Massacre II. Earning rave reviews, Warlord made a repeat appearance with ‘Mrs. Victoria’ on Metal Massacre III and were signed to Metal Blade for their 1983 Deliver Us 6-song mini-album which got the band featured in important publications such as Kerrang!.
Adding further intrigue to the growing Warlord mystique was the band members’ use of pseudonyms such as ‘Destroyer’ (Tsamis), ‘Thunderchild’ (Zonder), ‘Damien King’ (vocalist Jack Rucker), and entinel’ (keyboardist Diane Kornarens) as well as Warlord refusal to become just another LA club act, opting to present themselves on a grander scale instead. To that end, the band rented The Raymond Theatre to stage what would turn out to be the only Warlord live performance. It was filmed and recorded – without an audience present – for the group first full-length release, …And The Cannons Of Destruction Have Begun, issued in October 1984 and accompanied by a VHS home video release of the same name. The album featured 2 brand new tracks, oliloquy’ and MCMLXXXIV’, as well as both cuts from the ‘Lost And Lonely Days’ b/w ‘Aliens’ 12″” single released earlier that same year. Tsamis, Zonder, and Kornarens were joined by bassist Dave Watry (‘Archangel’) and new vocalist Rick Cunningham (‘Damien King II’). 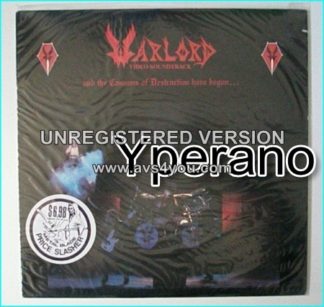