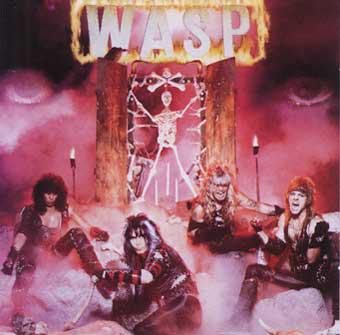 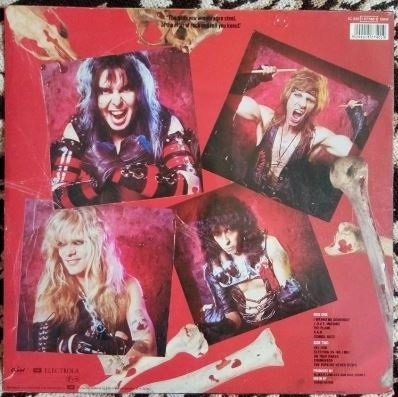 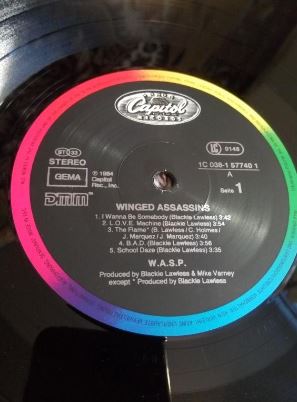 Metal masterpiece. Lawless’s Voice! Evil, Nasty, Wicked and then some! Ass kicking!
The spine of the vinyl release has Winged Assassins printed on it.

4 tinny crosses in the back cover next to 4 song titles.

Born Stephen Edward Duren on September 4, 1956 in Staten Island, New York. He’s come a long way since then but he is still the leader of W.A.S.P. In the early 80s, Blackie Lawless was one of the most infamous figures in rock’n’roll. His band W.A.S.P. were the new kings of shock rock. Their title of their debut single, Animal (Fuck Like A Beast), was so controversial that their record company EMI declined to release it in the UK, leaving that to indie label Music For Nations. The band’s stage show was equally outrageous: they threw raw meat at their audience, and had a naked woman tied to a torture rack. The name, it was said, stood for We Are Sexual Perverts. And most alarming of all was what Lawless had between his legs – a codpiece mounted with a circular saw blade.

Songs are written and composed by Lawless, except “Tormentor” by Lawless & Holmes and “The Flame” by Lawless, Holmes & J. Marquez.
Their song “”I Wanna Be Somebody”” achieved much success that it was ranked #84 on VH1 list of the top 100 hard rock songs.

Track Listing of: W.A.S.P. – Winged Assassins
Side One:
I Wanna Be Somebody
L.O.V.E. Machine
The Flame
B.A.D.
School Daze

Side Two:
Hellion
Sleeping (In The Fire)
On Your Knees
Tormentor
The Torture Never Stops

Covered by other bands:
The Song “Sleeping (In the Fire)” by Tiamat, Ruthless Steel (Hellas) that later changed their name to SCARBLADE, Melissa VanFleet, Heartless, Cris Dimepog Jones
“Hellion” by Children of Bodom,
“L.O.V.E. Machine” by Fallen Man, Lullacry and Fozzy,
“I Wanna Be Somebody” by Sentenced, Catamenia, Witchery, Gates of Ishtar, Vanilla Muffins
“The Torture Never Stops” by death metal supergroup Torture Division.
Show No Mercy – A Tribute To W.A.S.P. (2001) also contains 3 very good covers by songs from this album: Soulless – Tormentor, Abattoir – School Daze, New Eden – L.o.v.e. Machine.
(The song “”School Daze”” has been noted to be an adaption of Alice Cooper “School Out”)

You say you don’t wanna run and hide
A face that no-one knows
And everyone ya meet, you’re gonna show
You’re nobody’s slave, nobody’s chains are holdin’ you
You hold your fist up high,
And rule the zoo

Oh, you just got to be
Up high where the whole world’s watching me
Cause I, I got the guts to be somebody……to cry out

Oh, you just got to be
Up high where the whole world’s watching me
Cause I, I got the guts to be somebody…..to cry out