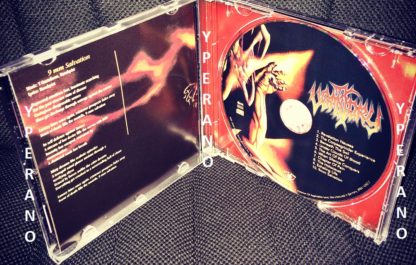 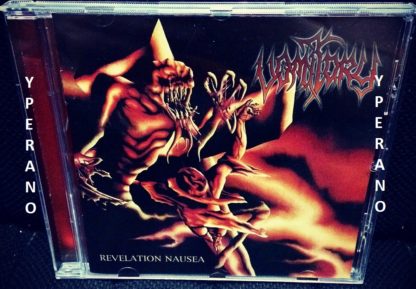 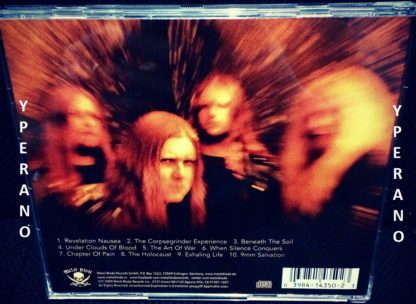 Revelation Nausea is the third album released by the Swedish death metal band Vomitory in 2001. It was recorded, like its predecessor, in Berno Studios in Malmö, Sweden in August 2000. This album was also produced by Henrik Larsson, with Vomitory also contributing their ideas. It was mastered by Göran Finnberg at The Mastering Room. The cover artwork was drawn by Peter Wallgren, with the photographs also by Micke Sörensen.

Backing vocals for the track “The Art Of War” was done by Cliff, who appeared courtesy of Driller Killer and Osmose Productions.

Blindly obey every command – 95%
Though their sophomore effort Redemption was a great album, it is Revelation Nausea where Swedens paint-peeling fist of death dialed the aggression up a notch and sprayed their demon seed upon the womb of blasphemy. Vomitory is adept at one thing: taking the brutality of roots Swedish death metal and cranking it to oblivion. Revelation Nausea is a near flawless eruption of energetic diabolism to send poseurs packing.

The title track begins with a fitting sample before laying down an intense pileup of aggressive melody and blasting violence. Bonesaw rhythms and excellent but simple selection of notes are refined through the holocaust of the albums mix. Though they lean towards the faster pace, the band is fully capable of incorporation breakdowns, as in “The Corpsegrinder Experience” with its insane old school break at about 1:27. There is nigh a weak song to be had on this album, each exemplifies the pure thrust of old school death smothered in crushing brutality and 21st century production standards. “Beneath the Soil” pulverizes with its d-beat verses and grinding destruction. “The Art of War” incorporates a Hellhammer-like groove into some sinister pure death metal guitar lines. “When Silence Conquers” is an amazing slower track which picks up to mid-pace for some killer riffing. “Exhaling Life” is another of my favorites with some moody and intense guitars.

Looking back over a career which has brought us many excellent albums, I have to admit that Revelation Nausea may be my top choice, with Primal Massacre close behind. Its a top notch Swedish death metal record which belongs in the company of its influences like Entombed and Dismember. If you’re fond of the crushing, beautiful tone bands of this ilk and national alignment tend to create, this is essential.