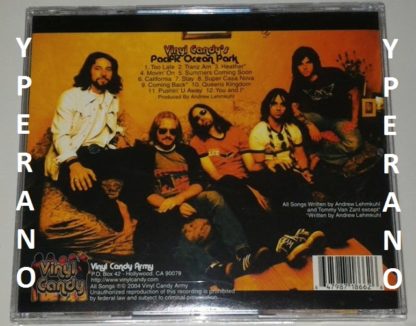 Recommended if you like: Butch Walker, Kings Of Leon, The Beatles

Amen. Bring In The Choir, The Angels, the Heavenly Hosts – Jellyfish fans, we have something for YOU! Vinyl Candy are not only principally inspired by Jellyfish, Imperial Drag, Kyle Vincent, Supertramp and The Candy Butchers, you get the sense on listening to this debut that they live and breathe this music in every waking moment. Dedication to this type of pop art is more than casually noted, guys. This is premium sugar-coated pop hookery, my friends. Despite not having a huge, major label project that the ambitions that artists driven by the art of the aforementioned bands would normally have, Vinyl Candy make more than due with what they have on this self-released long-lasting gem. It`s quite enthralling and picturesque in the portrait of classic sunny power pop. As Jellyfish were back in the early 90`s, Vinyl Candy is wonderfully out of step with what is happening in their present. But that makes “Pacific Ocean Park” all the more bewitching and piquant. Rooted in Southern California`s pop rock scene and inspired by the classic greats of the Pop Rock world, Vinyl Candy, featuring keyboardist/bassist/guitarist Andrew Lehmkuhl, vocalist Tommy Van Zant, drummer WessC, guitarist Billy, and bassist Jason Denver, provide solace to those who seek more than the generic pop culture of the new millennium. Many people feel that the music of today has been slowly watered down over the last 30 years to a sterile void of noise that neither sparks the imagination nor inspires. Vinyl Candy takes you back to a time when the music was fresh, inviting and warm. Pulling even more influences from the Beach Boys, Beatles, Eagles, Supertramp, Queen, Steely Dan, Fleetwood Mac and many others, its safe to say Power-Pop has never been more alive. Vinyl Candy`s heavy musical orchestrations, coated with layers of harmonies, melody, and unique sound will quench your taste-buds like a new piece of sugary sweet bubble gum. BIG TIME Extremely Highly Recommended!! Living in Southern California, it’s very rare to come across a band that reflects their surroundings in every way. Representing classic 70’s inspired pop/rock; Vinyl Candy embodies a unique style, reminiscent of the days when the Beach Boys ruled Southern California.

Forming a few years ago, the name Vinyl Candy emerged as a way to portray the essence of the music being produced, as Andrew Lehmkulh on keyboards explains: “I was so tired of band names, which have no relation to the music the band was playing. We were trying to capture the sound of 70’s pop/rock. In those days it was primarily vinyl albums, and the sound that everyone was into was 70’s bubble-gum pop rock. It was as simple as that. A band name says it all”. Established in Los Angeles, the boys in Vinyl Candy independently released their album Pacific Ocean Park.  The title is derived from the park of the same name that existed in the late 50’s and 60’s.  Tommy Van Zant, the group’s singer and owner of one of the coolest names in rock n’ roll, said that “all the pictures we saw of this park expressed the feeling of summer in California, and the abbreviation was “P.O.P”.  Those boys are clever.

Pacific Ocean Park offers the listener a variety of inspiring songs like the empowering and painful “Stay,” or the encouraging and optimistic “Summer’s Coming Soon” which was inspired by the formation of the band.  In a musical movement where punk and metal are attempting a hostile takeover of the airwaves, Vinyl Candy reminds us what it’s like to appreciate vocals and individual instruments as sole entities. Heavy guitar and bass lines, which drown out vocals, have been worked to death. This five-piece band relies on melodic songwriting and classic chord progressions, led by keyboards rather then the predictable abrasive guitar riff. Harmonies influenced by early Queen transcend genre and generation, captivating youth in Southern California with lyrics such as, “8-track in your green machine, so laid back while ya listen to Queen. Summer sun, ain’t it good to be young, hot wheels don’t ya know what I mean,” from their most rockin’ tune “Trans am”. This album provides a little bit of California life to those poor unfortunate souls who live elsewhere. It also represents a period in history when music was simple and enjoyable. Playing their first live show just a few months ago at the famous Whisky-A-Go-Go on the Sunset Strip to a packed crowd of screaming fans, they resonated such potential for future success. Currently receiving airplay in Portugal, Germany, The Netherlands, Oregon, Los Angeles and New York, Vinyl Candy possesses true dedication and positive attitudes toward a common goal. Guaranteed to stand out among common local acts, this indispensable group of guys will rise to the top.  These boys are going to bring back the relaxing California summer sunshine all year round. Vinyl Candy Live at The Whisky a Go-Go