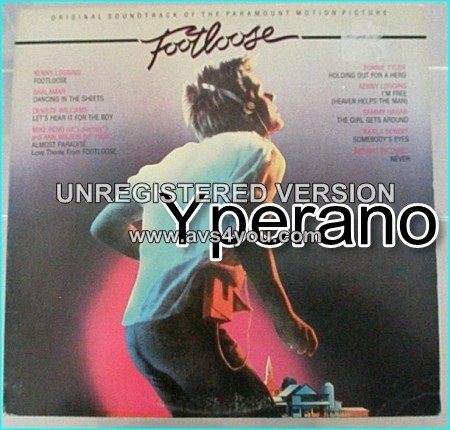 Bonnie Tyler, Heart, Sammy Hagar
Footloose is the original soundtrack of the Paramount Motion Picture, Footloose. The original nine-track album was released in 1984 and reached Number One on the Billboard 200 Pop Album chart on April 21, 1984, where it stayed until June 30, 1984.
The original soundtrack contained three Billboard Hot 100 Top 10 hits, including two #1 hits, Kenny Loggins’ “Footloose” and Deniece Williams’ “Lets Hear It for the Boy”, and “Almost Paradise”, a duet by Ann Wilson and Mike Reno that reached #7.

Footloose was a major hit, spent a grand total of ten weeks at number one and sold over seven million copies. Its easy to see why — the album delivers its mainstream pop, anthemic rock, and light dance-pop with style and an abundance of hooks. Six of the nine tracks became Top 40 hits, and three — Kenny Loggins’ bouncy title song, the excellent power ballad “Almost Paradise” (a duet between Loverboys Mike Reno and Hearts Ann Wilson), and Deniece Williams’ frothy, charming “Lets Hear It for the Boy” — shot into the Top Ten.

5.0 out of 5 stars Whats that over there?!,
Peek into my house on Saturday morning at 9am and you would have found me spring cleaning (and dancing) like a whirling dervish. Footloose was the soundtrack, and not only did it make spring cleaning funner, its what actually gave me the impetus to do it in the first place!

I shouldn’t like to give the impression I sit around wallowing in my own filth, but I don’t find cleaning enjoyable, at all. Its necessary, and once you’re doing it its satisfying, but its certainly not fun. Except, with ole Kenny Loggins and Welsh lunatic Bonnie Tyler exuberantly warbling out their power ballads in the background, sweeping became a dance, and vacuuming became a joy.

It has to be said, not all of the tracks on here are good. “Almost Paradise” (track 3) is everything that was bad about drab, uber-earnest, 1980s love song dreadfulness. (When it came on, its most likely I missed a spot.) And the last few tracks, barring the fabness of Foreigner, aren’t as good as the earlier part of the album. But given the earlier parts awesoneness, it can be forgiven.

Its easy to forget how well known the songs are. Holding Out For a Hero (aforemetioned Welsh lunatic) is shamefully, embarrassingly catchy and makes wiping counter-tops fun; Lets Hear it For the Boy is deceptively tuneful (the singer suddenly goes soprano at one point, highlighting how singers back then were genuinely talented… not something we always demand from our musicians nowadays) and makes fluffling sofa cushions a breeze.

Kenny Loggins is the star of the sountrack with the best track of the album, and one thats not too far off the pace. The title track is a vintage 80s “rockin’ out” choon and absolutely sets the tone. But, for me, I’m Free is the standout song. Its not just catchy: it is absurdly, toe-tappingly, hip-swingingly, running-manningly fantastic and sounds even better when played obnoxiously loud.

So open your windows, turn up the volume, grab a broom and be safe in the knowledge that once in the open air, the original source of music becomes lost… no-one will know you’re the one playing it. Oh, they’ll suspect, but they won’t know for sure. Win! Whether you’re working out or cleaning, or just feeling a little blue, even the most cynical of ears will be energised, enthused and, most importantly, genuinely cheered while listening to this. Tremendous stuff! 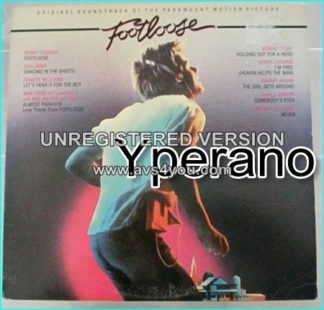