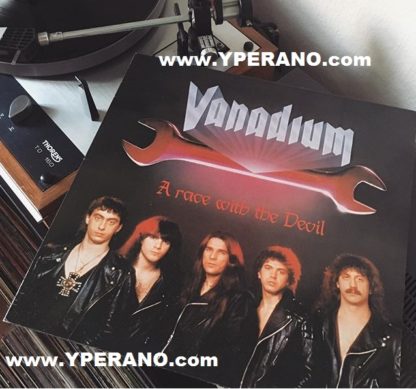 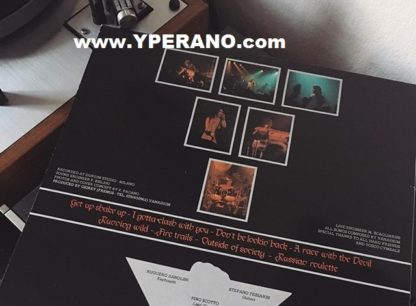 —A Race With The Devil (1983) Catalog # Durium DAI 30407
All tracks are Prantera-Geyrey-Zanolini, except where otherwise noted. 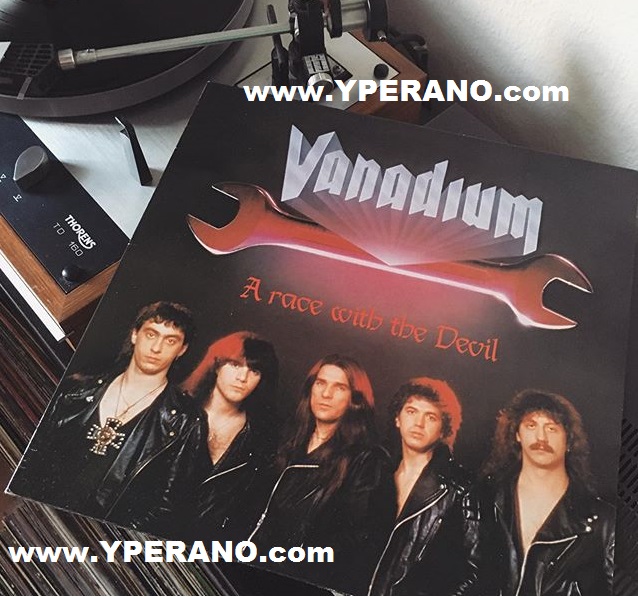 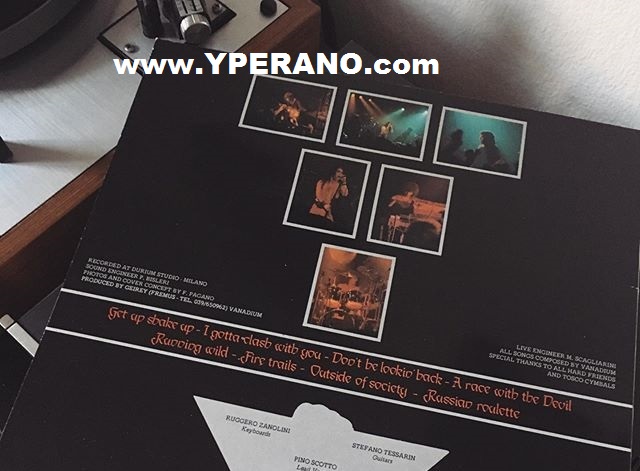 Vanadium second album, 1983 A Race with the Devil, didn’t introduce any radical new developments into the Italian group guitar-and-keyboard-driven heavy metal formula, but it nevertheless showed a qualitative improvement over its rookie predecessor in every possible department: songwriting, production, performance, you name it. In fact, it is arguably the strongest effort of Vanadium entire career and marked the reinstatement of band founder, guitarist Steve Tessarin, who’d been excluded from the first album sessions by a mandatory call to military service, and therefore returned seemingly twice as motivated to leave his mark this second time around. This he did by laying down a series of signature riffs and quite spectacular solos for chest-beating metal anthems like opener “”Get Up, Shake Up,”” the virtual speed metal blast “”Outside of Society,”” and the simply euphoric tour de force of a title track, which truly does “”race”” along like the demon spawn of Deep Purple “”Highway Star.”” Tessarin and keyboard player Ruggero Zanolini repeatedly go head to head with spirited solo jousts on all of these songs, as well as on the LP closing instrumental showcase, “”Russian Roulette.”” And, for his part, frontman Pino Scotto also raises his game on these recordings (his distinctively melodic rasps largely covering for the strong English accent he’d never shake), particularly on the group first truly competent power ballad, “”Don’t Be Looking Back,”” and the heartfelt tribute to his hero, Bon Scott, called “”Fire Trails,”” (which nicked a riff from Saxon “”Hungry Years””). Only a pair of mid-paced numbers — “”I Gotta Clash with You”” and the misleading named “”Running Wild”” — proved rather unexceptional, though neither one stunk up the joint by any measure, either. And certainly not in the eyes (and ears) of native Italian headbangers, who enthusiastically embraced A Race with the Devil and fell in lockstep behind Vanadium, as they helped elevate heavy metal to a new level of popularity across the boot nation.

A Gem Of Pure Heavy Metal – 98%
Vanadium oh, almighty Vanadium what a band. I am not really into classic metal because I listen to heavier stuff but this is history. Back at the beginning of the 80 in Italy there were few metal bands but what bands! Surely the most important one in classic metal field was Vanadium. A Race With The Devil is their second full length. The band guided by Pino Scotto was very close to Deep Purple in the approach but with its own personality and excellent technique. Actually they were more in heavy metal, and sometimes they can remember early Iron Maiden, an inevitable influence for the period.

Pino Scotto’s voice is a trademark: he can be so soft in a heavy metal ballad like  Don’t be Looking Back  but also aggressive in the other songs like the fast beginning of  Get Up, Shake Up, going very high in tonality without being in falsetto, always keeping a quite harsh, warm tonality. All in all a great voice that still nowadays remains powerful with his new band Fire Trails (name taken from the song in this album, dedicated to Bon Scott).

The pure passion for this genre is well demonstrated during the whole burning album, made of pure heavy metal and the title track, its manifest. Fast hard rock riffs, pure old style melodic/epic (in a good way, not like in German power crappy metal) solos and the passionate keys sound. So evident the blues background in their skills, beautiful. The riffs are always catchy and always so dirty like its meant to be for the genre.

The production is a bit low budget, normal for a group like this in Italy but this helps in giving a more pure and passionate sound that makes me very happy comparing to bombastic productions with no musical content at all by other more famous groups. The beginning of  Running Wild  is so untamed, pure and what a solo..beautiful. Passing through the melancholic  Fire Trails  and the rock n roll influenced  Outside The society we can really breathe the true essence of 80’s heavy metal made with guts in those years.

The beautiful, epic instrumental  Russian Roulette  put the exclamation point to an album made of pure passion, rage, love and sweat. Great band, great album that doesn’t fear to be compared to those more famous outside Italy. A real shining gem.

Second album, 1983, the Italian metal band that first broke down national borders and introduced Italy in the world of Heavy-Metal from the creative point of view. From the onset, influenced by Deep Purple, here we are now in full strand NWOBHM touches. And Scotto & Co. perfectly interpret that school of thought, taking the best of foreign influences. The result is a solid work (much more than its predecessor), well balanced and original, perhaps the best of the bunch. Deadlifts virtuosos of the five rockers Milan hold safely comparison with the vast majority of performance carried out by the most renowned names well: especially the guitar Stefano Tessarin (which replaces Carlo Asquini) oozes charisma and personality. Strength and willingness to Rock in its essence “”overwhelm”” the listener short, this record does his job. It starts with the frantic Get Up, Shake Up , which seems at times to echo the early Iron Maiden and Black Sabbath of God RJ and which, as its title says it all … The guitar riffs are really “”bad”” and valuable, and this is perhaps the track that is more in the mind after hearing the job to complete. I Gotta Clash With You showcases the potential of the particular mix of keyboards and guitars typical Deep Purple, pointing to the AOR sound to which, a few years later, will arrive just the legendary British quintet. The third piece, Do not Be Looking Back , can be considered to all intents and purposes a power-ballad , which is also appreciable and exemplary use of keyboards and double guitar. Really nice soloing Tessarin. The title track back to speed, and keyboards come here, sometimes, even to steal the show for other instruments (with results this time not too exciting, to be honest): paradoxically, however, is one of the tracks in general more “” weak “”(perhaps because of the”” common thread “”not excessive grip and a bit ‘too monotonous, though interrupted by a quick and beautiful phrasing than usual Tessarin). In ‘ intro to Running Wild Maiden seen anyone with a catchy guitar arpeggio double, but then quickly switch to rhythms Hair classics (besides the title leaves no doubt about it …) Great White style, but with guitars much more rough (and much more daring) and embellished with a Hammond very well blended. Trails Fire (song – a curiosity – give the name of the current group of singer Vanadium) is a Hard-Blues arranged surprisingly well for loud but very dirty Scotto. Still a lot of virtuosity Tessarin: piece more than adequate. Outside Of Society is pure Speed-Metal to Iron Maiden, but the body of Roger Zanolini fills a major gap in a masterly way by which the entire genre “”fast”” is unfortunately not always been generally limited: reduced weight, even if present, keyboards. You can not miss, even here, the beautiful duet with guitar Tessarin. Finally, there is Russian Roulette : synths that recall, at the beginning, before the plots of today symphonic power-metal , then the basic but disturbing soundtracks of horror B-movie era, and even rhythm and tempo changes “” Made in Maiden “”, interspersed with powerful deadlifts Hard-Rock . Tessarin Zanolini here, and take their leave in a final, very successful marriage. And ‘interesting to note that, heard the record, you get the distinct impression that the Vanadium could break more than many other anonymous band Heavy period (despite a feedback both was actually not small, though not global), and that the mere geographical origin – with all the limitations resulting from the domestic market completely snubbed by the large-scale production, still attached with nails and teeth to traditional pop music and little timidly opened the electro-pop – in fact constituted a heavy fine again for this great quintet. Which fortunately had the time (so to speak, since it would melt until twelve years later) to let this beautiful album …

TRACKLIST 1. Get Up, Shake Up 2. I Gotta Clash With You 3. Do not Be Looking Back 4. A Race With The Devil 5. Running Wild 6. Fire Trails 7. Outside Of Society 8. Russian Roulette 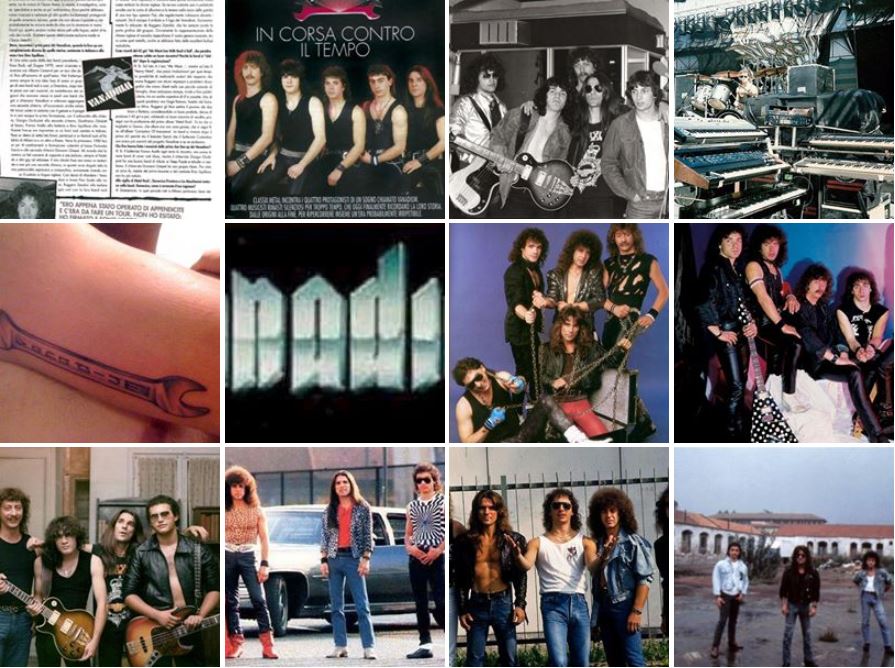 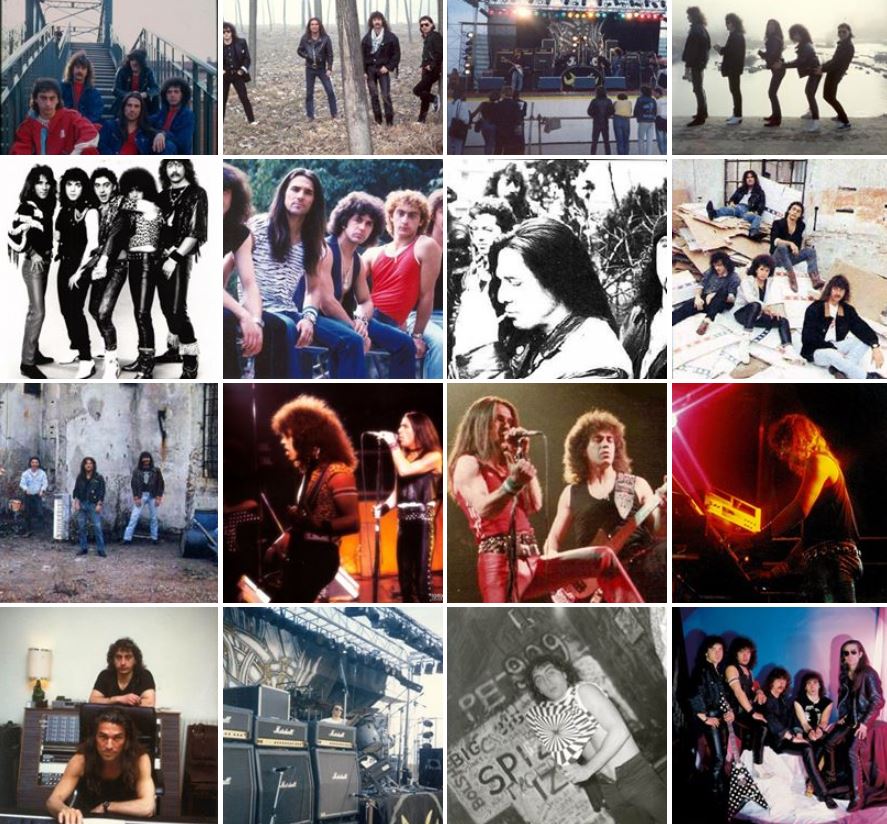 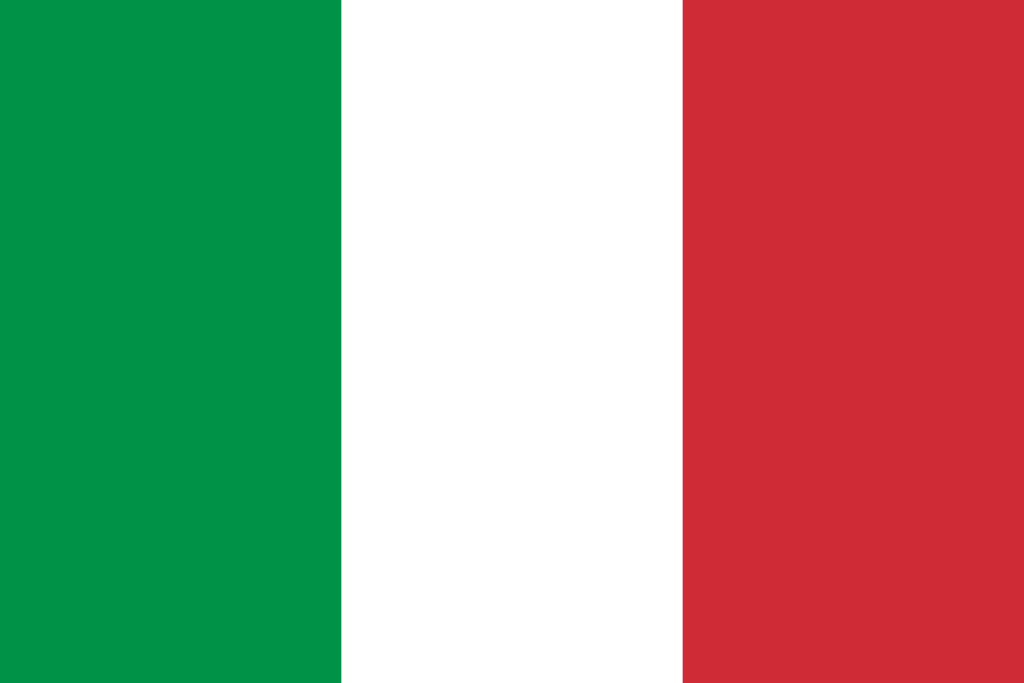 Be the first to review “VANADIUM: A Race With The Devil LP. 1983 their 2nd album. Never on CD. Classic Heavy Metal. Check audio.” Cancel reply