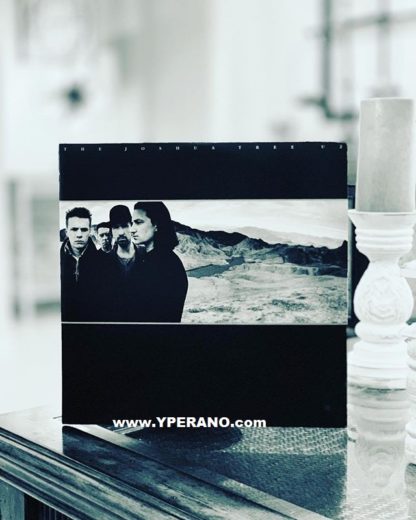 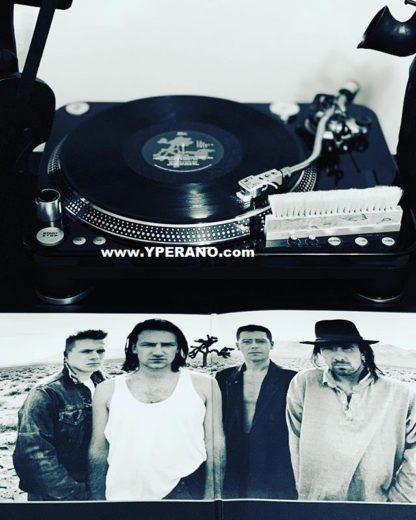 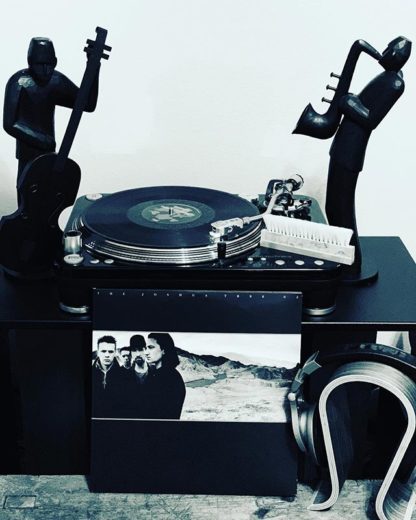 U2: the joshua tree LP 1987 gatefold w. lyric sheet. With or Without You, Where the Streets Have No Name, I Still Haven’t Found What I’m Looking For… 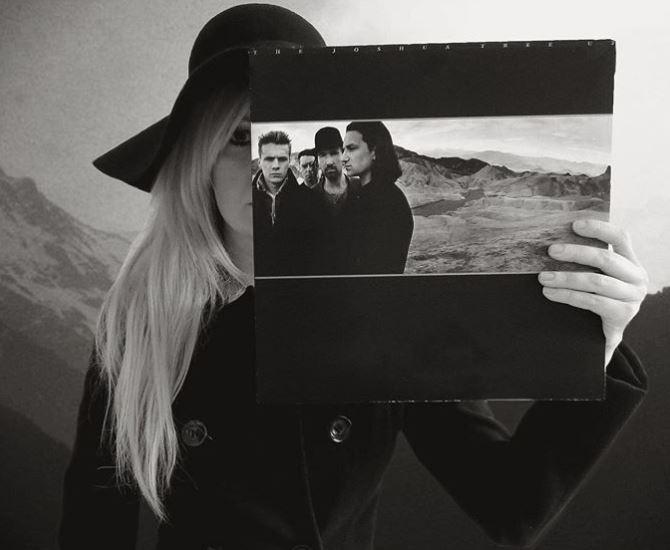 U2 turned toward themes of personal identity and complex relationships on The Joshua Tree. Not that the group was willing to come down off the barricades entirely: “Mothers of the Disappeared” and “Bullet the Blue Sky” turned a jaundiced eye toward Central America and the United Statess role there. But the predominant mood here is one of self-discovery and the hunger for something more on tracks like the pulsating “Where the Streets Have No Name” and the gospel-ish “I Still Haven’t Found What I’m Looking For”. The albums masterstroke, however, is “With or Without You”, a nasty love song dressed up as an ode of devotion and care. It ranks with the Polices “Every Breath You Take” as the most misread smash hit of the 1980s. –Daniel Durchholz
==============================================
U2 have made a lot of grand music, but 1987s graceful, powerful Joshua Tree stands as their masterwork. It is by turns moving, inspiring, and exhilarating. Each member contributes his best work, and each song shines. Would that all rock records were made with the same care, the same passion and invention. The ubiquitous opening salvo of “Where the Streets Have No Name,” “I Still Haven’t Found What I’m Looking For” and the tense “With or Without You” may define this album to many, but its real strengths lie in the brilliant second half: “Red Hill Mining Town,” “Trip Through Your Wires,” and the surging “One Tree Hill” (the latter being one of rocks–hell, all musics–truly finest moments). –Michael Ruby
=======================================================
The Joshua Tree is the fifth studio album by rock band U2. It was produced by Daniel Lanois and Brian Eno, and was released on 9 March 1987 on Island Records. U2 aimed for a harder-hitting sound that used the limitation of strict song structures. The album incorporates influences from American and Irish roots music into the bands sound, and thematically, it depicts their love-hate relationship with the United States.
Inspired by tour experiences in the United States and American literature they were reading, U2 settled on “America” as a theme for the record. Recording began in January 1986 in Ireland, and to foster a relaxed, creative atmosphere, the group recorded in two houses, in addition to two professional studios. Several events during the sessions helped shape the politically- and socially-conscious tone of the album, including the bands participation in A Conspiracy of Hope tour, the death of roadie Greg Carroll, and lead vocalist Bonos travels to Central America. Recording completed in November, with additional production continuing into January 1987. Throughout the sessions, U2 sought a “cinematic” quality for the record that would evoke a sense of location, in particular, the open spaces of America. They represented this in the sleeves photographs depicting them in American desert landscapes and with a lone Yucca brevifolia plant (“Joshua tree”).
The album received critical acclaim, topped the charts in over 20 countries, and sold in record-breaking numbers. According to Rolling Stone, the album increased the bands stature “from heroes to superstars”. It produced the hit singles “Where the Streets Have No Name”, “With or Without You”, and “I Still Haven’t Found What I’m Looking For”. The album won Grammy Awards for Album of the Year and Best Rock Performance by a Duo or Group with Vocal in 1988. The group supported the record with the successful Joshua Tree Tour. Frequently cited as one of the greatest albums in rock history, The Joshua Tree is one of the worlds all-time best-selling albums, with over 25 million copies sold.

BBC Review:  It remains their finest moment to this day.

It’s hard to imagine these days, but at one time the world didn’t belong to Paul ‘Bono’ Hewson and his pals. By 1987 the band had undoubtedly become stadium–fillers in Europe, but it was America that was their heartland, and they were on the verge of cracking it wide open.

Having already establishing their cavernous sound with producer Steve Lillywhite, by 1984 The Unforgettable Fire had the band opting for the more ambient (and subtle) team of Brian Eno and Daniel Lanois. It was a canny move that both allowed them more space to emote in the studio and also perfectly suited the student population in the States, reared on FM radio.

In time-honoured fashion the band toured the US like madmen, and by 1987 the bands’ American citizenship-by-osmosis had magically occurred. The Joshua Tree‘s songs augmented their political stance with bigger subjects such as right-wing intervention in El Salvador (”Bullet The Blue Sky”) and the Mothers Of The Plaza De Mayo in Argentina (”Mothers Of The Disappeared”) In other words, even if the world didn’t yet know it, U2 were now a global brand.

But it wasn’t mere posturing. The Joshua Tree, with its black and white Anton Corbijn sleeve set in Death Valley was a truly widescreen experience. The Edge’s arpeggios (here used to great effect on the opener, Adam Clayton’s rattling traps and Larry Mullen’s rumbling, single note runs were alchemically transformed by Eno and Lanois into pure Americana, complete with wailing harmonicas (“Trip Through Your Wires”) and endless references to deserts and water.

With the first three tracks all conquering the singles charts on both sides of the Atlantic, U2 were now here to stay. Unfortunately it also signalled a point where they began to take themselves a little too seriously (as evinced by their ponderous Rattle And Hum film). But The Joshua Tree– voted number 26 in Rolling Stone‘s top 500 albums of all time – 20 years on, it remains their finest moment to this day. 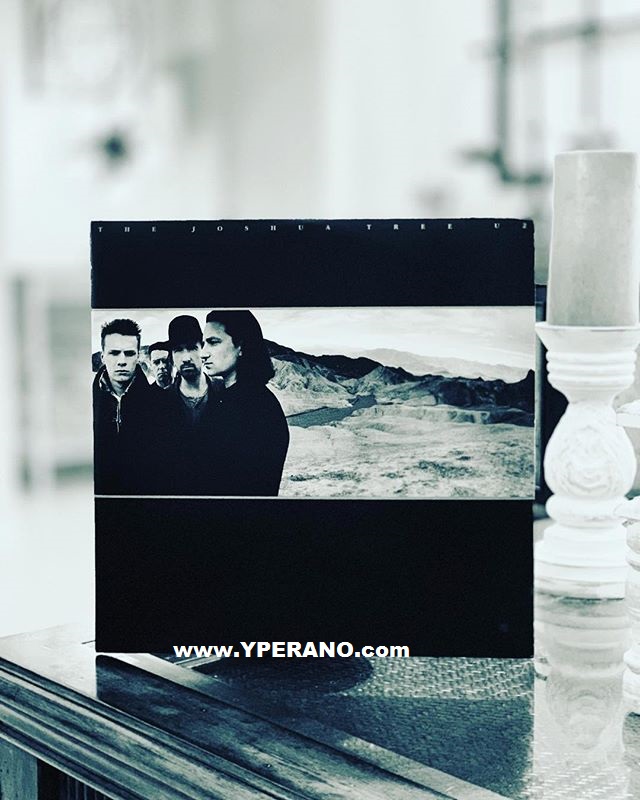 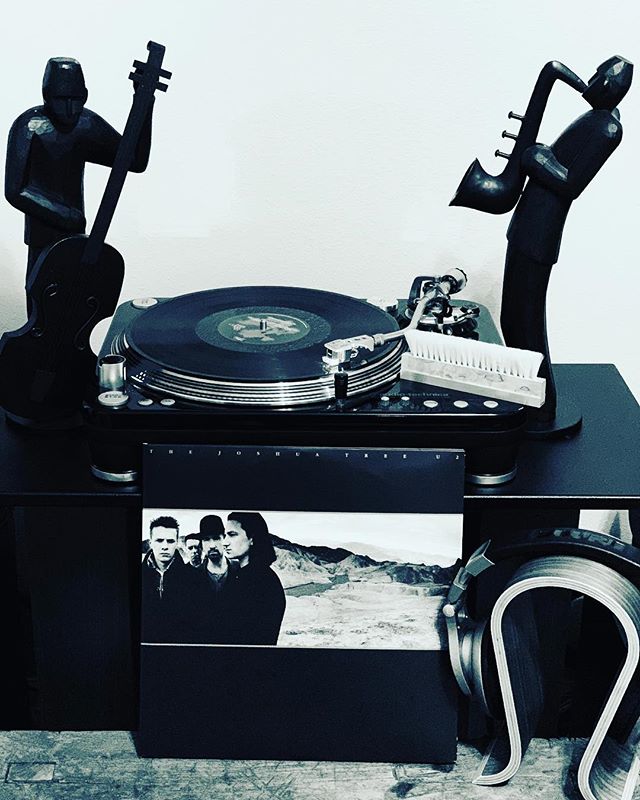 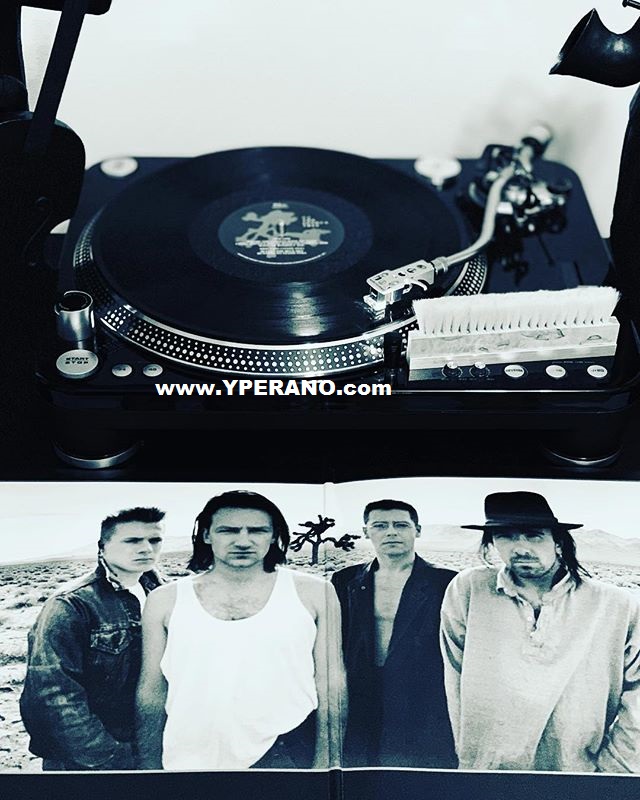 Be the first to review “U2: the joshua tree LP 1987 gatefold w. lyric sheet. With or Without You, Where the Streets Have No Name, I Still Haven’t Found What I’m Looking For…” Cancel reply 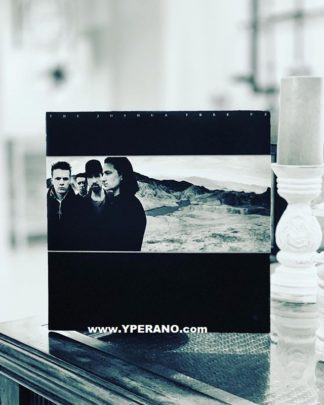 You're viewing: U2: the joshua tree LP 1987 gatefold w. lyric sheet. With or Without You, Where the Streets Have No Name, I Still Haven’t Found What I’m Looking For… £7.99
Add to basket