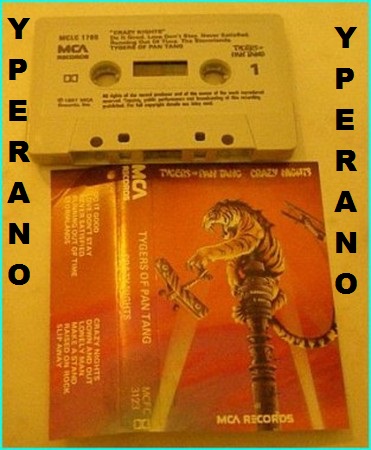 Everything here works perfectly and I love this album (a lot). Tygers was still very metal at this point but this album does have a very welcome bluesy edge to it that I actually really enjoyed hearing. The guitar work from John Sykes and Robb Weir is still very good even though it doesn’t pack as much of a punch as it used to. I can’t say there is a bad solo or riff on the album though. Vocalist Jon Devrill puts on one of his very best performances with the band on this album. And the drumming helps hold everything together.  Overall this is a great album that is actually a favourite album from the band and the whole NWOBHM movement.

One of the most criminally overlooked and underrated NWOBHM (New Wave Of British Heavy Metal) bands of all time. Crazy Nights is the third outing for the Tygers, and the second with ‘new’ vocalist Jon Deverill and guitarist John Sykes (later to be found in Whitesnake, Thin Lizzy etc) Crazy Nights departs slightly from the more ‘polished’ effect of spellbound’ and adds a more raw edged feel to the Tygers music. It was originally released in 1982 and still sounds as fresh today as it did then.

Hailing from tiny Whitley Bay in the Northeast of England, the Tygers of Pan Tang (whose name originated from a Michael Moorcock novel called Stormbringer) were formed when aspiring singer Jess Cox met guitarist Robb Weir at the local pub in November 1978. Weir, along with bassist Rocky and drummer Brian Dick, had recently formed a band combining the lessons of early-’70s heavy metal legends such as Black Sabbath and Deep Purple with the do-it-yourself ethos of punk — an emerging style eventually dubbed the new wave of British heavy metal. After much rehearsing and gigging in the surrounding area the foursome recorded a number of demos at Impulse Studios, whose owners Neat Records released their first single “”Don’t Touch Me There”” in September 1979. Relentless touring across Britain would follow, supporting such childhood heroes as the Scorpions and Budgie, as well as NWOBHM peers like Iron Maiden and Saxon. They also signed a deal with MCA and entered London Morgan Studios in June to record their proper debut, Wildcat, which went straight into the British charts at number 18 upon its released in July 1980. Looking to beef up their sound, the band added virtuoso guitarist John Sykes just in time for their biggest gig ever at that year Reading Festival. Yet, despite this promising start, singer Cox decided to quit the group at year end, citing the ever-popular “”musical differences”” and going on to form the short-lived Lionheart with recently ousted Iron Maiden guitarist Dennis Stratton. Ex-Persian Risk vocalist Jon Deverill was drafted to replace him and the revitalized Tygers of Pan Tang kicked off 1981 firing on all cylinders. Widely considered their best album, Spellbound hit the streets in April 1981, and was followed by another bout of touring which kept them nipping at the heels of NWOBHM powerhouses Iron Maiden, Saxon, and Def Leppard. Things began to unravel when MCA forced the band to write and record a follow-up in only three weeks, resulting in the uneven Crazy Nights, released in November 1981. European dates in support of Ian Gillan followed, but guitarist Sykes quit abruptly to join Thin Lizzy upon their return to England (eventually achieving even greater success with Whitesnake and Blue Murder). The band soldiered on with new six-stringer Fred Purser, whose more commercial leanings were heard on 1982 absolutely fantastic The Cage album.

5.0 out of 5 stars
One of the most criminally overlooked and underrated NWOBHM (New Wave Of British Heavy Metal) bands of all time. Crazy Nights is the third outing for the Tygers, and the second with ‘new’ vocalist Jon Deverill and guitarist John Sykes (later to be found in Whitesnake, Thin Lizzy etc) Crazy Nights departs slightly from the more ‘polished’ effect of pellbound’ and adds a more raw edged feel to the Tygers music. It was originally released in 1981 and still sounds as fresh today as it did then. There are so many highlights on this album, it would be impossible to list them all, but ‘Love Don’t Stay’ is a particular highlight, mainly because they prove that while metal can be heavy, it can also be melodic. This track is a classic in every sense of the word, and it shows the way in which many melodic metal bands would go during the mid eighties. Crazy Nights has several intense moments too. The riff to ‘Do It Good’ for example, (air guitar anyone?) and the storm of speed and ‘duelling Les Pauls’ on ‘Running Out Of Time’, the mix of riff and bluesy tempo of ‘Crazy Nights’ a heavy metal classic. Jon Deverill voice is easy to listen to, and set the standard for many heavy metal vocalists, (compare Crazy Nights with any early Iron Maiden with Bruce, and you’ll see what I mean…) the dual guitars soar and riff harder than most, and they are all backed up by a solid and tighter than tight rhythm section. A NWOBHM classic, and I can’t recommend this enough if you’re into Maiden, Scorpions etc. 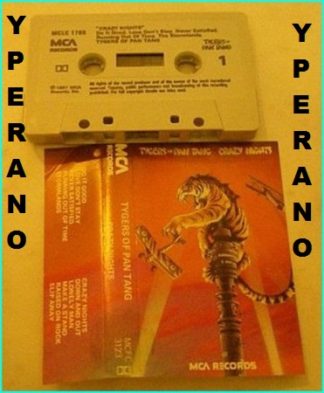