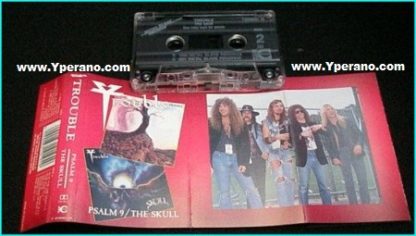 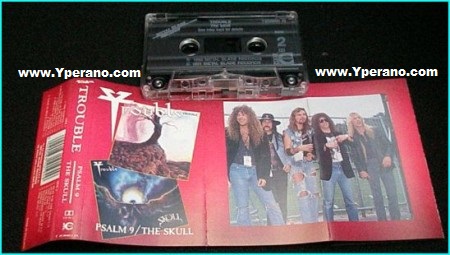 As far as classic doom goes, Chicago Trouble deserves to be mentioned in the same breath as other early trailblazers like Saint Vitus, The Obsessed, Witchfinder General, and Cathedral. Since their inception in the early ’80, the five-piece played a distinct role in shaping the doom metal movement with albums like Psalm 9 and The Skull. Tagged as  White Metal  (as lame a categorization as any), Trouble was known mostly for singer Eric Wagner overt Christian lyrics. Laid over the band somber riffs, bastardized from the Sabbath cannon, this offered an alternative to the groups that were revealing in the standard demonic imagery. And without sacrificing heaviness.

Of the two early albums, Psalm 9 is the better, but only marginally so. They start off with  The Tempter, a classic track that bridges the gap between NWOBHM and the doom movement. While  Victim of the Insane, Revelation (Life or Death), and the title track take on the distinct traits of doom, it the songs that alternate between slow dread and galloping metal –  The Fall of Lucifer and  Bastards Will Pay  being two other notable mentions – that really stand out. Guitarists Rick Wartell and Bruce Franklin are one of those classic guitarist teams, trading off each other and locking together in harmonized beauty. They’re a good foil to Wagner high pitched shriek, and when the tempos crank up a couple of notches, it easy to see why this band was so revered from the get-go.

The biggest problem The Skull has is that it just can’t compare to Trouble debut. There more of an emphasis on straightforward doom here, which makes it not quite as varied as Psalm 9. That doesn’t make it a boring album, though – wade through the 11 minutes of  The Wish,  revel in the solos that close the song, and you’ve gotten your money worth right there. Lyrically, Wagner is much more grimmer and morose than he was on Psalm 9 (and he wasn’t exactly cheery there), and that gravitas adds to killer tracks like  The Truth Is, What Is  and the title track. Overall, The Skull is a good album that suffers from the being in the shadow of its predecessor.

5.0 out of 5 stars Trouble show why they have inspired so many bands with this!,
Having read countless articles about them, and heard a lot said about them from bands I love. I decided to look into trouble, especially this double album cd. As id heard it was their best. Having now listened to it a few times, I can see where bands like… cathedral, Eyehategod, crowbar have found the sound they have now. This is a more doom version of black sabbath, with a hint of judas priest. Plus with songs like the skull and psalm 9 on it your going to have songs you will enjoy and remember for a long time. If you like slow, chugging, groove filled riffs, that then at times speed up to a Judas priest like thrash riff you will love trouble. sabbath, priest, Pantera, Cathedral, Eyehategod, crowbar etc.. fans buy this

Psalm 9  and  The Skull  are without question the foundation upon which American doom heavy metal was built. One can also toss St. Vitus, The Obsessed and Pentragram into the mix, but no one had the grit and promise that Trouble had when these records were issued in 1984 and 1985, respectively. Later efforts like â€œManic Frustrationâ€ and the bandâ€™s self-titled affair would prove just that, but this is where it all started.

Psalm 9  was Trouble’s debut outing, an ambitious, but poorly recorded one at that. This thing is hindered by a recording whose quality is barely better than a demo, yet the fearless  Bastards Will Pay  and the freewheeling  Assassin are classic, pure slabs of American heavy metal. A cover of Cream’s  Tales Of Brave Ulysses  closes this album nicely, setting things up for its successor,  The Skull.

Coming from a modern-day perspective, one can see where the holy British Gothic metal trinity (Paradise Lost, My Dying Bride and Anathema) cribbed their main influences. More melodic and haunting,  The Skull  has eerie, creepy offerings like  Pray For The Dead  and  The Wish  and the lurching, gruesome  The Wickedness Of Man  to boot.

No mention of Trouble can be made without grand marshal Eric Wagner. His screechy, untamed delivery is what set the band apart, and even today, the man still sounds as tormented as ever.

From a historical perspective, both of these albums belong in any doom/stoner fan’s collections. As mishandled as the band’s catalogue is (anyone know if those Rick Rubin-era albums will see the light of day?), there is still a devoted and rather large legion of Trouble fans out there.

5.0 out of 5 stars Great album.
Great album.. Lots of great sounds with some variation, not the same riffs over and over, sounds like Black Sabbath in a way.
5.0 out of 5 stars
“Trouble” belongs to the old generation of doom-metal who stepped on stage right after the pioneers of heavy metal.
The band is from Chicago, it started playing in 1979, but their debut album was issued in 1984 only (on Metal Blade for USA).
At that time the band consisted of Eric Wagner (vocals), Bruce Franklin & Rick Wartell (guitars), Sean Mc Allister (bass – ex-Witch Slayer), Jeff Olson (drums).
Christian apocalyptic doom propelled the band to the cult status, but – again – due to the lack of proper promotion by the label – the band didn’t achieve the popularity they deserved.
So, “Psalm 9” is a re-issue of the debut album (not so easy to find). A real value for money.
5.0 out of 5 stars DOOM METAL Gold!
Great for fans of Candlemass and thrash metal fans who like their metal a tad downtuned and Black Sabbath or Pentagram inspired! Might be the first album I would recommend to people who have want an entry into the Doom Metal sub-genre
5.0 out of 5 starswhy does nobody know about these guys?!?!
I wish I had more to say about this. The best thing I have come up with so far is a good Metallica PLUS Black Sabbath. Normally, I’m into newer stuff, but this does catch my interest when I’m listening. There’s a cover of a Cream song at the end. I think its called “Tales of Brave Ulysses”. I really do enjoy this. You can’t say its thrash or doom. Its more along the lines of a thrashy power metal album with “heavy” metal vocals (think Savatage) and the emotion of doom metal. Now if you found them through Fates Warning or Savatage, way to go!!! All you need to know is to add Metallica’s sound to those bands and you’ll get Trouble’s style. Oh, and when I say Metallica, I mean Ride the Lightning era. If you found this album through thrash metal (like Metallica), then just add Black Sabbath and take away a little of heaviness to the sound.
5.0 out of 5 stars Any true metal fan has to respect the Sabbath love given here by Trouble
Any true metal fan has to respect the Sabbath love given here by Trouble. Every track is great 80’s metal. Trouble are one of the severely under rated bands of the genre. 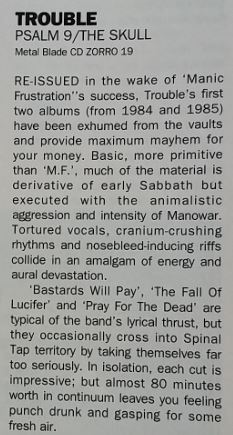 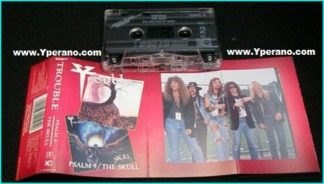