TRICK OR TREAT. Marc Price, Gene Simmons and Ozzy Osbourne star in this horror. When he learns of the death of rock star Sammi Curr (Tony Fields), high school student Eddie Weinbauer (Price) is given one of his idol’s records by local radio DJ Nuke (Simmons), who knew the heavy metal musician personally. But the spirit of Sammi lives on in the record and he uses the connection to order Eddie to carry out his bidding from beyond the grave. As his demands grow increasingly sinister and violent, Sammi is forced to break free and only Eddie can stop him from taking his revenge on the pupils of Lakeridge High School. 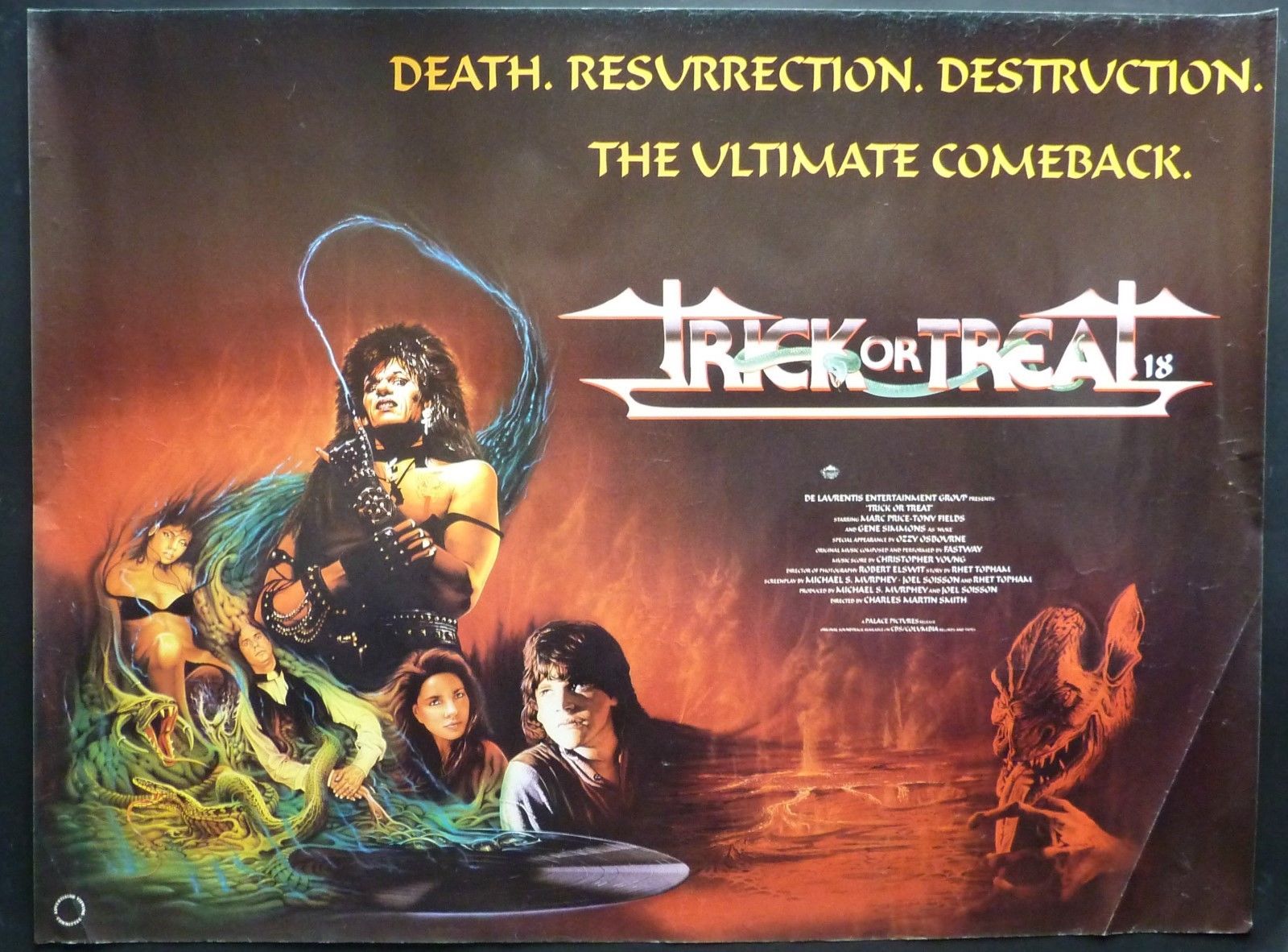 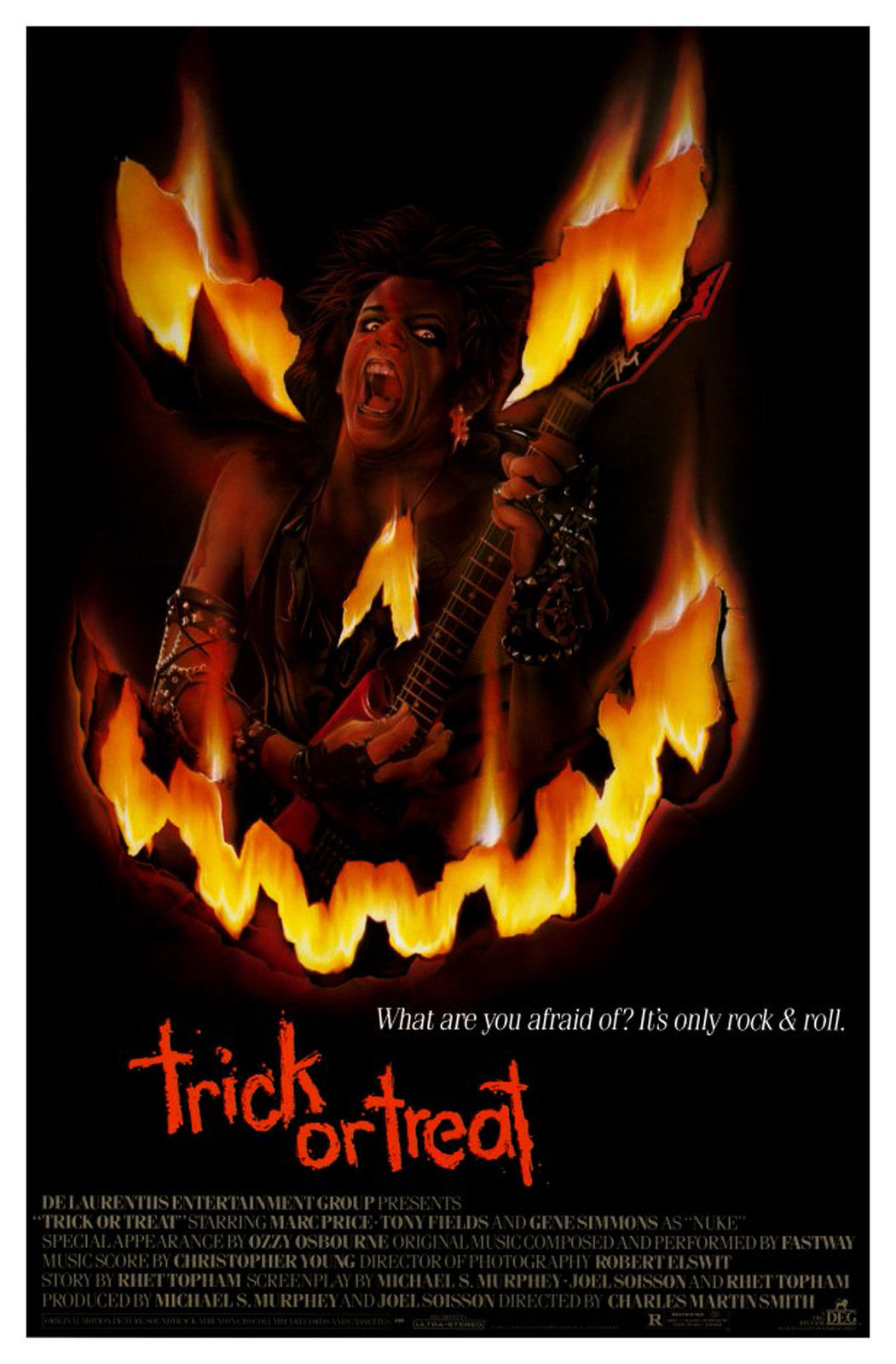 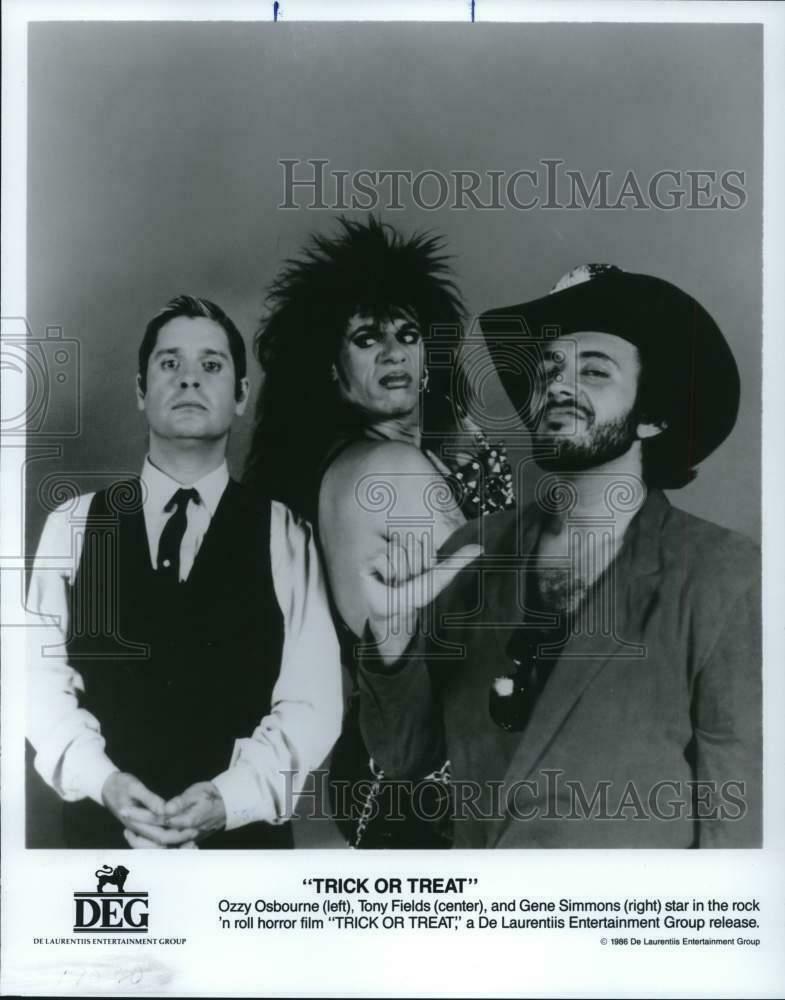 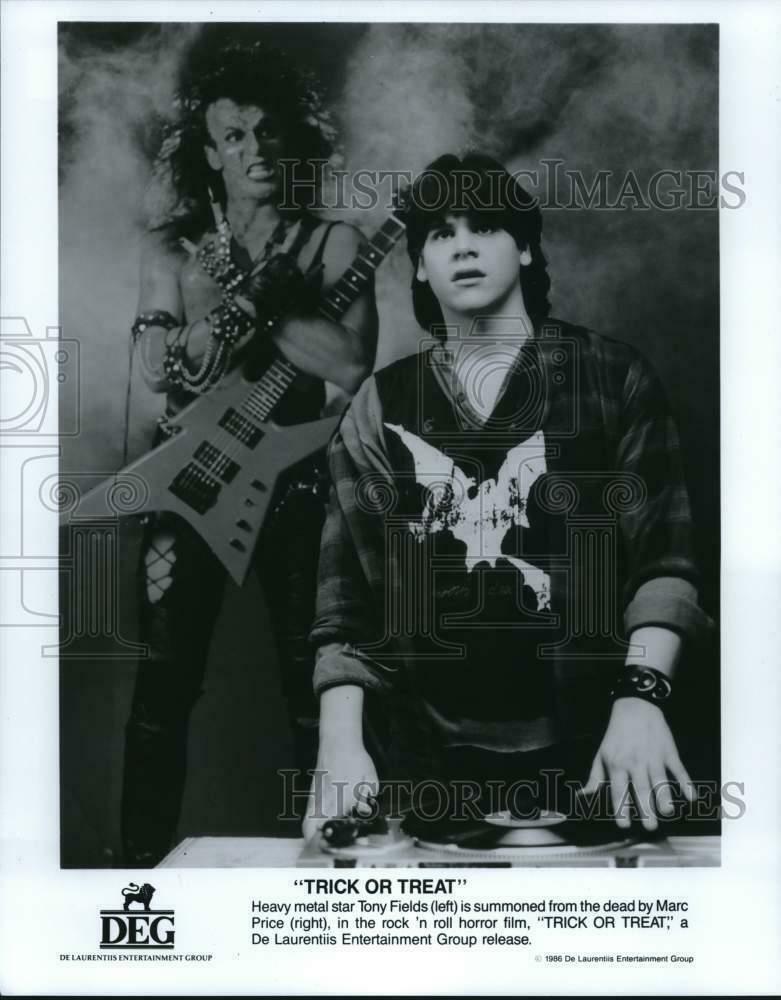 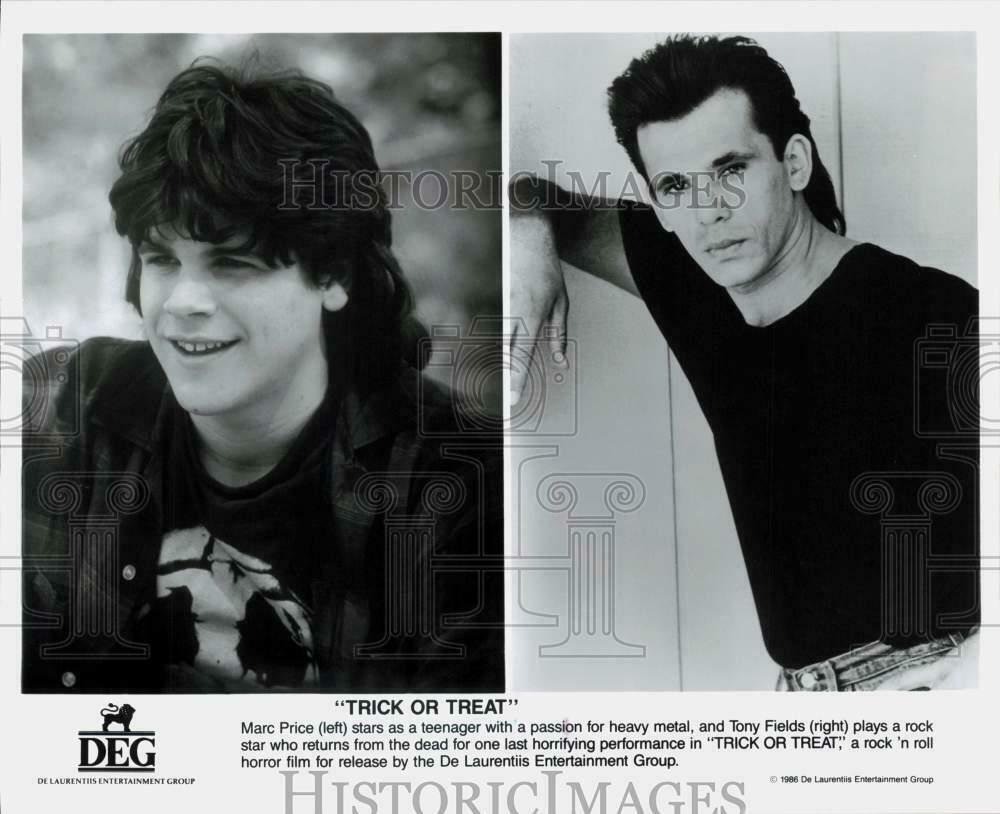 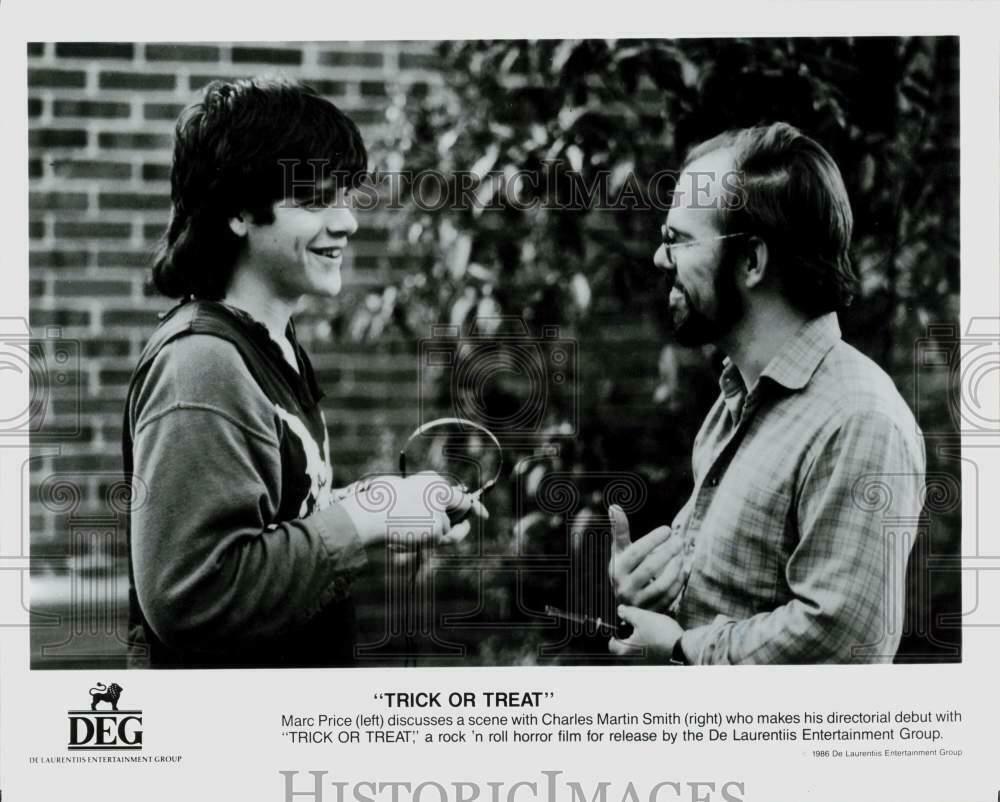 Cult movie company Anchorbay were all set to release a special 20th Anniversary Edition DVD of ‘Trick or Treat’ in 2006, but cancelled it when they encountered problems with the film’s music licensing.

Eddie (Marc Price) is a true metalhead in every sense of the word. He has a metal-sounding nick name (Ragman) all the posters, skulls, leather and studs adorning his bedroom, a mom who doesn’t understand him and very few friends. He also has a crush on a girl (Lisa Orgolini) who doesn’t look twice at him and a group of bullies who will do anything and everything to humiliate him on a daily basis.

Fortunately for Eddie there will always be metal and there will always be his one idol Sammi Curr (Tony Fields), a metal icon who flaunts every rule going, plays loud music, sings suggestive lyrics and performs obscene acts on stage. Sammi also believes in his own hype and believes he is Rock’s Chosen Warrior who come Judgement Day will rule all. Eddie, being the impressionable fan that he is writes to Sammi on a regular basis and believes in his message.

Disaster strikes for Eddie when he hears of the tragic death of his idol in a hotel fire. He turns to the one man who he believes shares his passion for the Curr legacy, WZRP disc jockey, Nuke (played admirably by Kiss’ own Gene Simmons). Nuke feels sorry for Eddie and offers him a very special gift, the last record Sammi Curr ever recorded, a one-off demo that Nuke intends to play at midnight on Halloween.

Eddie is overwhelmed by Nuke’s generosity and subsequently plays the record at home on his stereo… revelling in the knowledge that he has the only copy. Eddie’s excitement soon turns to sheer terror however, when the record begins to play on it’s own… rotating backwards and uttering demonic messages of revenge and retribution IN SAMMI’S VOICE! Before Eddie can disconnect the satanic sounds emanating from his speakers, supernatural forces intervene and an evil version of Sammi materializes in a burst of electrical chaos. Eddie follows the advice of the dead singer (well, you would, wouldn’t you?) and before he knows it, he’s beating the bullies and getting the girl.

Unfortunately for Eddie, Sammi doesn’t know when to stop and grows out of control, almost killing the gang leader’s girlfriend. When Eddie rebels against his idol, Sammi is reincarnated and all hell breaks loose at the High School Hallowe’en party. What follows is a climactic struggle between good and evil as Eddie desperately tries to find a way to stop the devilish Sammi from turning his hometown into the heavy metal concert from hell… literally! Can Eddie save the day or will Sammi have the final say? Watch this movie and find out for yourself.

What are you afraid of… It’s only Rock n Roll!

At last, a movie for all the heavy metal fans out there. Trick or Treat is the long awaited homage to a form of music that has been greatly unappreciated and largely ignored for many many years. ROCK ON!

This film is one of my absolute faves of any era. It combines every thing that is good about an 80’s movie (the loner, the bully, the girl)and puts it all together with a tale of the occult and a blistering soundtrack. The special effects still look good today and, my God, if Sammi Curr is not a real rock god, then he damn well should be!

5.0 out of 5 stars Hot music from an equally hot movie..
Love it, I have an obsession with the music and the story line with this movie 🎥
I now have the dvd and the cd soundtrack, each time I listen to it I’m either singing along or transported to the concert on Halloween night.. Sammi Cur is super sexy too..👩🏼‍🎤🎸🎶🎤🤘🏼🌹😈🖤

5.0 out of 5 stars A Treat not a Trick
This cult classic is one of my favourite movies. The Story of a young rock fan Eddie who is bullied at school, he longs for friends and finds one in ‘Nuke’ (Gene Simmons), who provides Eddie with the only copy of Eddie’s favourite singer, Sammi Curr’s unreleased new album. Eddie hears a message to him from Sammi Curr in the lyrics. I won’t spoil the story, but to tell you that there are cameo appearances from rock royalty including a performance by Ozzy Osbourne in a role that is very un-Ozzy like. Many have slated this movie, even getting it a place on the ‘Rotten Tomatoes’ list of bad movies, but I really enjoyed the movie.

5.0 out of 5 stars A brilliant hard rock sound track empowering & in your face!
Nostalgia was the driving force behind buying this. I’m also pleased to own this soundtrack! Excellent service! And brightens up the day! Thank you.

5.0 out of 5 stars Great movie.
Very pleased. Excellent disc and great movie. Watched it twice and next Friday is organised.

5.0 out of 5 stars Fantastic
One of the best 80s Rock Metal albums…from a fantastic movie…CD arrived well on time..everything was perfect…thank you for allowing me to re-live my teens

5.0 out of 5 stars Great service, great film!
Music is great and the story is amusing and probably responsible for a lot of destroyed stylus needles and scratched records of its time. Hee hee. Happy days. Cracking.

5.0 out of 5 stars Trick or Treat
This was purchased as a present for someone. I had to watch it purely in the interest of ensuring that it was a good copy. It was and I thoroughly enjoyed it. Shame I had to give it away.

5.0 out of 5 stars Five Stars
Brilliant service perfect item many thanks .

5.0 out of 5 stars Treat
Brilliant blast from the past, total legend of a film

5.0 out of 5 stars Five Stars
What an absolute classic

5.0 out of 5 stars Cult Classic
Reminds me of being a teenager (released when at school). Great soundtrack too.

5.0 out of 5 stars Five Stars
very good. product as described and delivered quickly.

5.0 out of 5 stars Great Purchase
Classic movie with Fastway soundtrack (very good in their time).