View basket “TOTO: Stranger In Town 7″ + Change of Heart. Check video.” has been added to your basket. 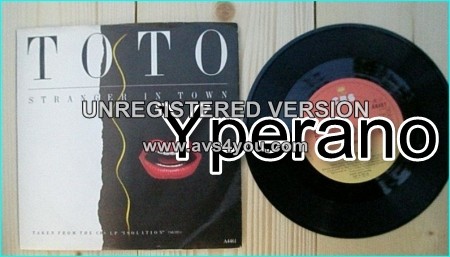 “Stranger in Town” is a hit song from American rock band Toto from their 1984 album Isolation.
It was the first single released from that album, reaching the Top 30 on the Billboard Hot 100 in December 1984. It was also a Top 40 single in Australia, where it remains the fourth highest charting single by Toto behind only “Hold the Line”, “Rosanna”, and “Africa”. The verses of the song feature David Paich on vocals. Whereas the chorus features a vocal combination of Paich, Steve Lukather, Bobby Kimball, and Fergie Frederiksen.
The music video (featuring actor Brad Dourif) and lyrics to the song are often mistakenly interpreted as telling the story of Jack the Ripper, but more likely refer to the character of Blakey / “Jesus,” and the events that unfold in Whistle Down The Wind, a book by British author Mary Hayley Bell made into a popular British film in 1961 and an Andrew Lloyd Webber musical in 1996. (The lyrics also refer to the Michael Fagan incident, which took place two years earlier.)
The video was also nominated at the 1985 MTV Music Video Awards for Best Direction.

Be the first to review “TOTO: Stranger In Town 7″ + Change of Heart. Check video.” Cancel reply 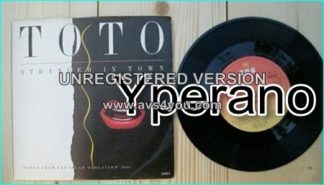