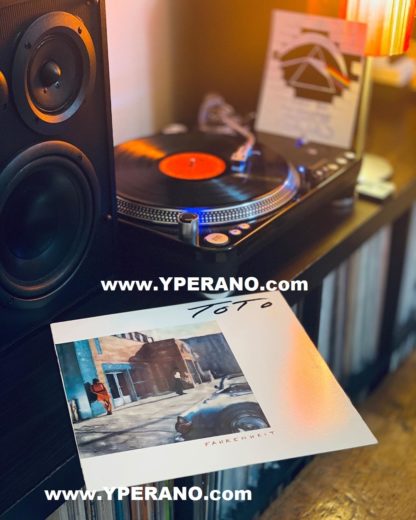 TOTO: Fahrenheit LP 1986 original w. inner with lyrics. Check VIDEOS “I’ll Be over You”, “Without Your Love”, “Till The End”. 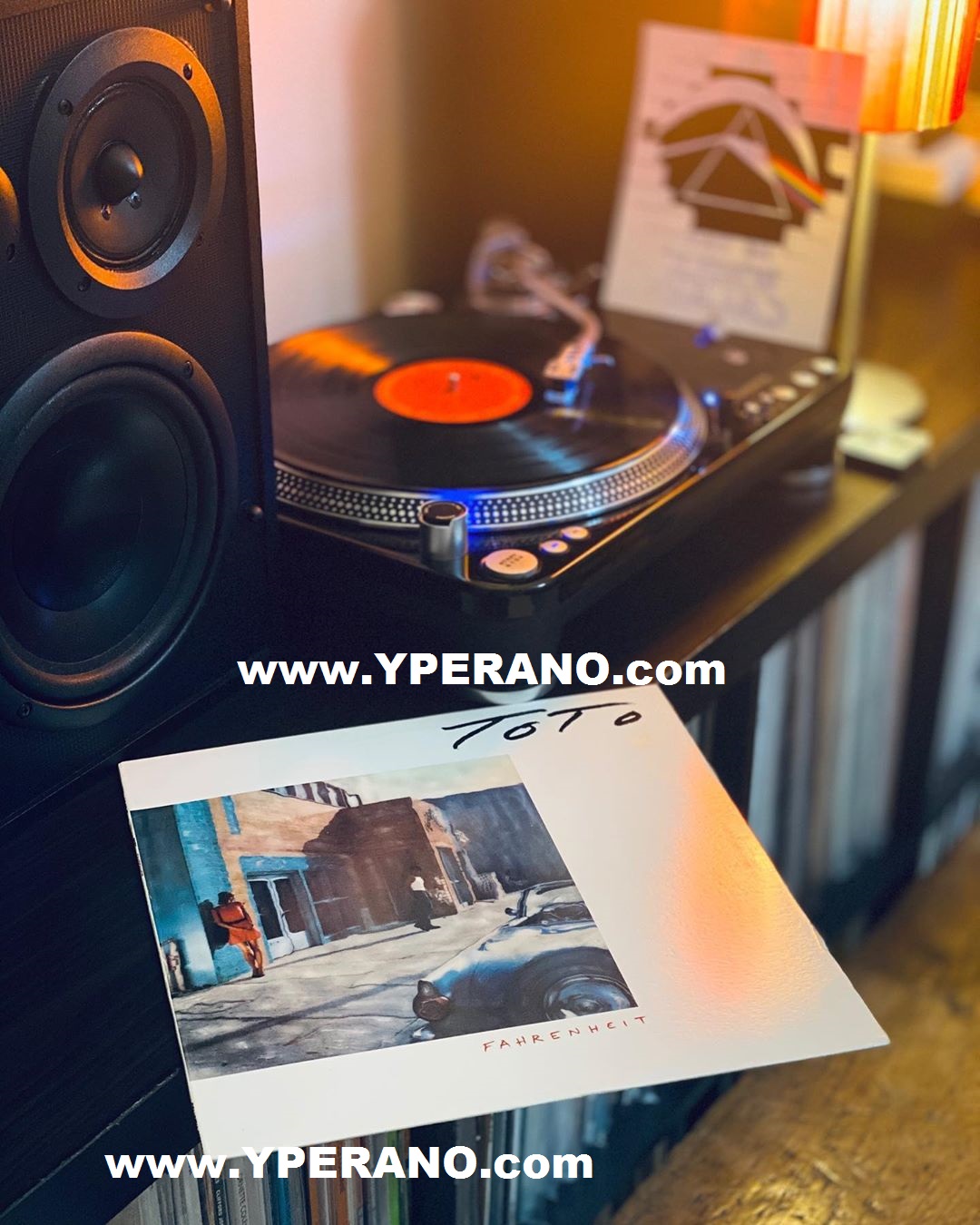 TOTO’s most celebrated ’80s album?. One of my favorites from the band is the absolutely mid-80s sounding “Fahrenheit”, which also marked the debut of Joseph Williams on lead vocals.

“Fahrenheit” is an album of varied musical goals and textures, yet for the major public is known for its two ballads, both of them Top 40 singles.
For instance, “Can’t Stand It Any Longer” — co-written by Steve Lukather, David Paich and Joseph Williams — found a tough melodic rock groove on Fahrenheit, and it proved to be a worthy showcase for Joseph Williams’ grittier style. The title track also had a crisp, funky groove. But neither became singles.
Instead, “I’ll Be Over You” streaked to No. 11 and “Without Your Love” went to No. 38.

“The pop hits, if you listen to the whole album, they would take a single off of it — and it would be the ballad, or a softer song,” Steve Lukather said. “But there was always strong rock stuff on all Toto albums. If you come see us live, people will say: These guys are a lot tougher live than we would have imagined. That’s just the way we play. We’re not trying to prove anything. We’ll morph from style to style.”

Elsewhere, Toto’s “Fahrenheit” is highlighted by “We Can Make It Tonight,” an upbeat rock&pop gem; the more muscular and AOR “Till the End”; the smooth “Somewhere Tonight”; and “Lea,” a diaphanous love song from Steve Porcaro.
But all you’ll ever hear on the radio, for better or for worse, is “I’ll Be Over You.” And you know what? It’s a true justice this song become a hit, it’s one of the greatest ballads of all time.
Fahrenheit‘s big hit did mark another success for the songwriting team of Steve Lukather and guru Randy Goodrum. He’s contributed to hits from a number artists including Chicago (“If She Would Have Been Faithful”), Journey’s Steve Perry (“Oh Sherrie,” “Foolish Heart”) and a host of others. Goodman has since worked on many of Lukather’s solo albums, beginning with his 1989 self-titled release.

“Fahrenheit” is another essential Toto album, catchy, with a distinctive sound, varied as always, even finding an exquisite album-closing collaboration between Lukather, David Paich and jazzman Miles Davis. That might have seemed like an odd-ball choice, if not for the guitarist’s history with one of jazz music’s most mercurial figures.

I really dig it. Highly Recommended. 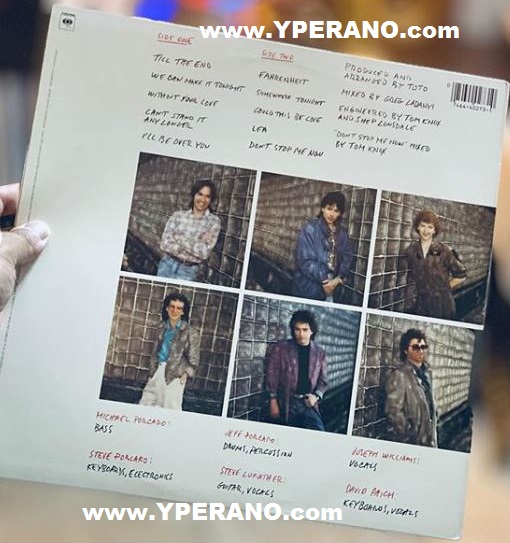 Album info:  At the close of the Isolation tour in 1985, Fergie Frederiksen was let go. Lukather claimed that the band was not meshing well with Frederiksen because he had a difficult time recording with them in the studio. The band held an audition and Joseph Williams, son of film composer John Williams and 1950s singer/actress Barbara Ruick, was chosen to take over lead vocals in early 1986.

With Joseph Williams now onboard officially, Toto wrote and recorded Fahrenheit, released in October 1986. While Williams performs lead vocals, Frederiksen had begun recording a few tracks and is featured as a background vocalist on the track “Could This Be Love”.

Fahrenheit brought the band back from the heavier sound of Isolation to their pop/rock roots. “I’ll Be Over You” and “Without Your Love”, which were both ballads sung by Lukather, were the two hit singles. The band recruited several guest musicians for the album. They recorded an instrumental piece entitled “Don’t Stop Me Now” with legendary jazz trumpeter Miles Davis. In addition, a then-unknown Paula Abdul appeared as a dancer in their “Till the End” music video. Michael McDonald provided backup vocals on the song “I’ll Be Over You” (and appeared in the accompanying music video), while Eagles founder and songwriting giant Don Henley appeared on the Steve Porcaro penned track “Lea”.

After its release, the band embarked on another world tour. Upon its conclusion in 1987, Steve Porcaro left the band to pursue a career in film and television scoring. Fahrenheit eventually went Gold on October 3, 1994. Steve Porcaro was never replaced and Toto decided to continue with only five members. Although Porcaro occasionally assisted the band on synthesizers for their subsequent studio albums (and appeared on their 1988 tour), David Paich handled most of the live keyboard work (with keyboard technician John Jessel assisting on certain dates) post 1988.

Fahrenheit is the sixth studio album by Toto, released in 1986. It was their first album to feature Joseph Williams on lead vocals. Former lead singer Fergie Frederiksen was fired due to problems with his ability in the studio. However, he sings backing vocals on the song ‘Could This Be Love’. It was also the last Toto album to feature keyboardist Steve Porcaro as a permanent member, as he left after the Fahrenheit tour.
Toto returned to making lush, mid-tempo tunes of romantic despair on Fahrenheit, enlisting their third lead singer, Joseph Williams, and calling in chips all over L.A. to score cameos from the likes of Michael McDonald, Don Henley, David Sanborn, and even Miles Davis, who had the closing track, “”Don’t Stop Me Now,”” pretty much to himself. Williams was a slightly grittier and more identifiable vocalist than Bobby Kimball or Fergie Frederiksen. But while the return to power ballads had the intended effect on the pop and adult contemporary charts (both “”I’ll Be over You”” and “”Without Your Love”” scored), the album had a relatively low chart peak. The album failed to go gold until 1994, but featured two top forty singles in “”I’ll Be over You”” (#11)

Singer Paula Abdul appears in the video for a third single, “Till The End”. 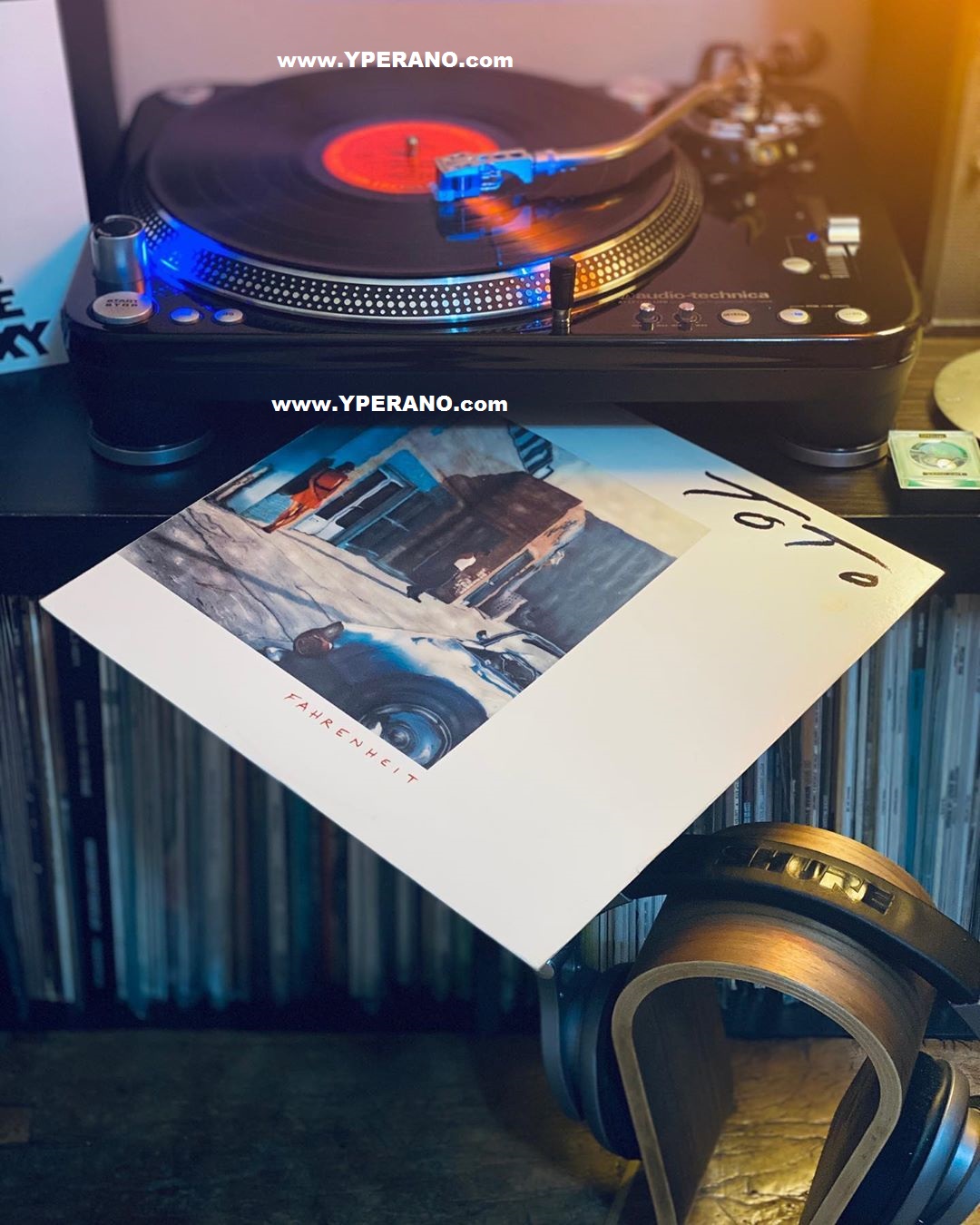 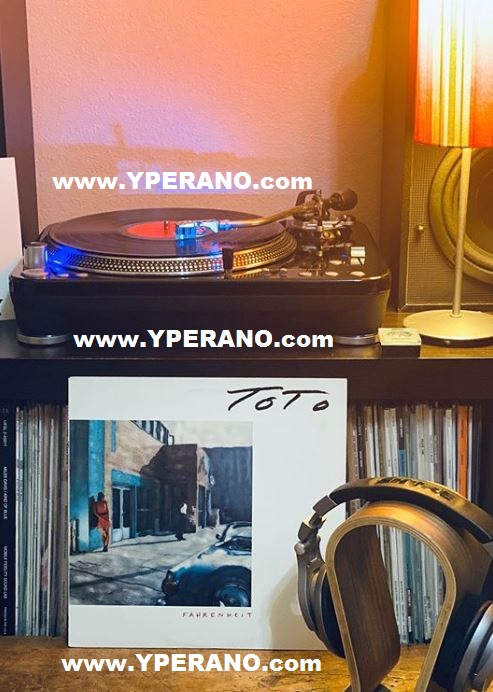 5.0 out of 5 stars Fahrenheit – Heartfelt and Timeless…
Fahrenheit is a beautiful Toto album. And that really saying a lot. “”Summer and romance”” – that really says everything you need to know. There a certain romantic mystique, a kind of autumn-like, gorgeous ethereal quality to this album that I really only find on this album and to a certain extent “”The Seventh One””. It really encapsulates the late 80 with beautiful ambience, perfect instrument dynamics, incredible grooves that turns on a dime. There also an hint of sadness in the romance, listen to I’ll be over you, listen to Somewhere, tonight…it there – the classic sweet sorrow. Some parts are so ambient and soulful it almost makes you cry – listen to the end of “”Lea”” with those gorgeous Don Henley backing vocals at the end. Listen to “”Could this be love””, with those amazing dead-on chorus backing vocals, and gorgeous ending modulations – and feel yourself recapture that youthful first love, that first crush, those first sensations you perhaps never knew you had, or thought you had forgotten. The summer side of the album is equally timeless even though it captures the era perfectly – the title track is classic 1980 and you picture yourself cruising down the street in some empty town with the head rising from the pavement. Listen to “”We can make it Tonight”” and feel yourself transported back to those halcyon summer nights with a (real or imagined) first love, the innocence that faded long ago. It all right there, in those blistering, emotional tracks. However, as always with Toto, don’t mistake happiness and hopefulness with shallowness – there always that undercurrent of thoughtfulness and restraint, a perfectionist attention to taste and penchant for balance

5.0 out of 5 stars
Toto have been one of my favorite bands for like forever it seems. Everything they write is gold in my books. Every song flows beautifully and their sense of texture has always amazed me. You hear all the instruments equally, none of them over power the others and the over all sound quality is fantastic. The bass and bass drum are more up front in the mix which is something that was sorely lacking in the old release. Here it is brought up just enough in the mix to sound just right. This is done to perfection! So in conclusion if you ever enjoyed Toto or just want to check them out for the first time? you need to go and grab this. The fact is, it was simply a great release by a great band back in the day that now sounds as it should, perfect!
——————————————————————————————
5.0 out of 5 stars A Little Lacking in Variety.
On an album with 10 tracks there are only three that could be considered uptempo which means the album is missing some of the vitality that makes TOTO the best band around. That not to say that the ballads aren’t good, in fact they are uniformly excellent. It just a shame there are so many of them. Still, if you know TOTO primarily for their ballads, and like that then this is an excellent album to have in your collection.
Joesph Williams makes his debut as lead vocalist here, and does a fine job, although personally (and I acknowledge I’m in the minority) I prefer his predecessor Fergie Frederiksen (who, surprisingly, contributes backing vocals to one of the best cuts “”Could This Be Love””). The musicianship of the other band members is flawless as ever, and they are joined by an array of guests ranging from Michael McDonald and Don Henley to David Sanborn and Miles Davis.
This really is a very good album, but TOTO are at their best when they rock out, and that does not happen here. 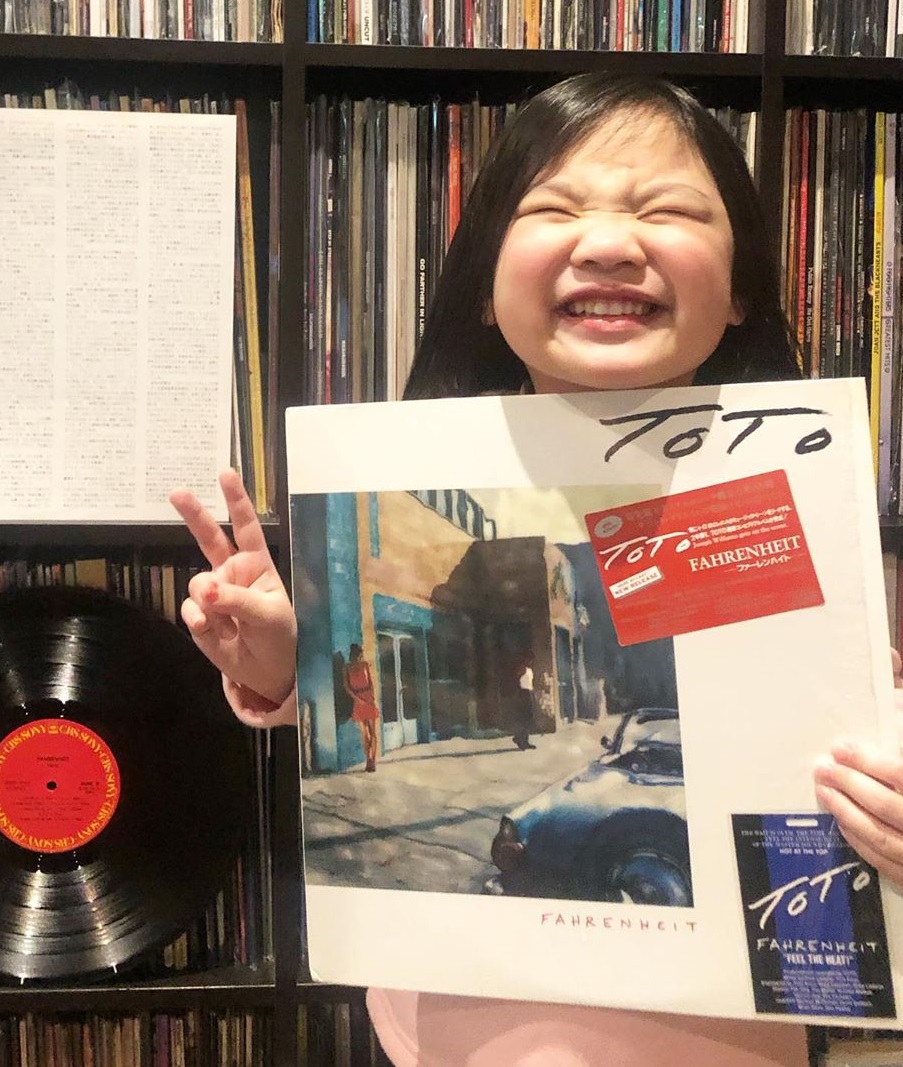 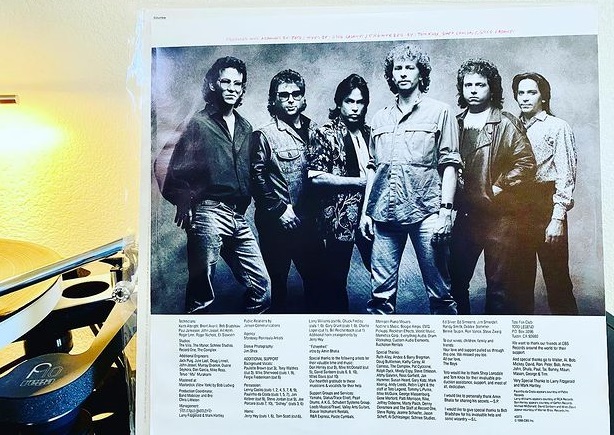 Be the first to review “TOTO: Fahrenheit LP 1986 original w. inner with lyrics. Check VIDEOS “I’ll Be over You”, “Without Your Love”, “Till The End”.” Cancel reply 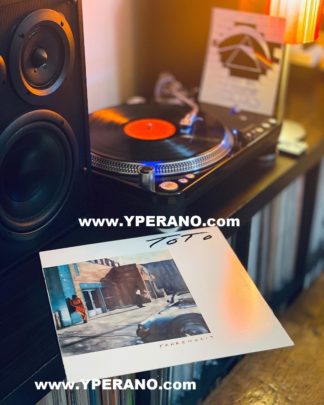