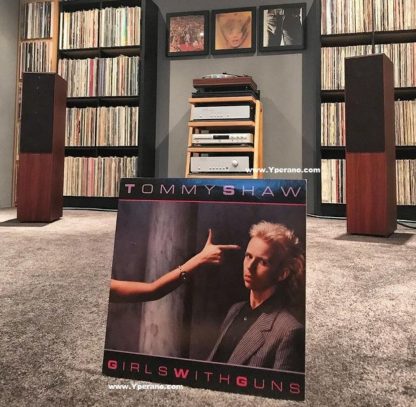 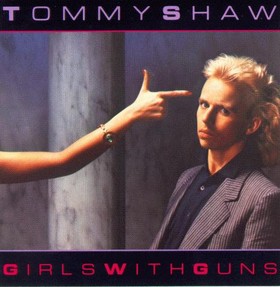 Girls with Guns is the debut solo album from Styx guitarist/vocalist Tommy Shaw. It was released in October 1984 by A&M Records.
The title track was a top 10 hit at rock radio, peaking at #6 on the Billboard Mainstream Rock Tracks chart and reaching a high of #33 on the Hot 100. “Girls With Guns” was featured in a first season episode of Miami Vice called “Glades.”
A second single, the ballad “Lonely School”, was released in late 1984 and peaked at #60 on the Hot 100 in January 1985. The videos for both singles received premiere status and strong rotation at MTV, and the network aired a concert special featuring Shaw.
The Girls With Guns album charted on the Billboard 200 Albums chart for 25 weeks, peaking at #50. 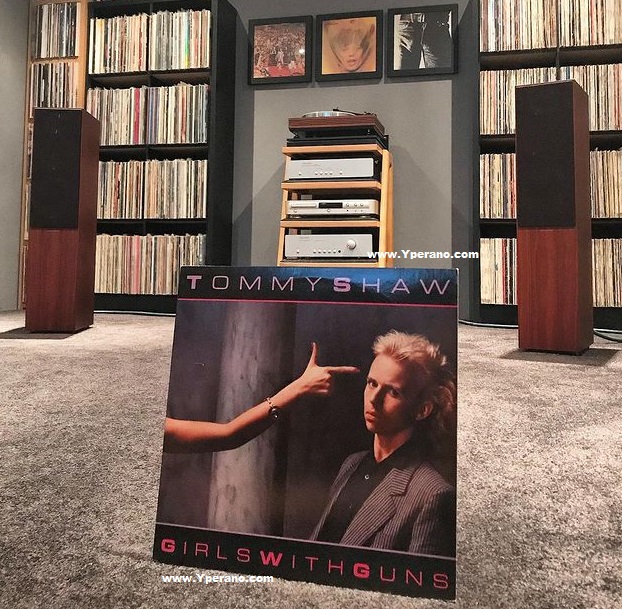 About 10 years or so ago I saw Styx for the first time and walked away with a broad smile on my face.

Styx put on a great show, beyond expectations. I was familiar with a lot of their songs, realized they sang a few others I knew but did not know it was them and learned the great Tommy Shaw was their lead guitarist and sometimes singer.

Tommy Shaw? He’s been around for a while. How else do I know him?

Sadly, one of those eureka moments I’ve crossed over the years once I began diving into bands outside my radar, heard on radio but never fully embraced their catalog until later in life.

Back in the day, I had this strange, and thankfully short-lived, habit of buying albums if I liked a song, but rarely, if ever, bothered to listen to the whole album. I’d listen to the hit song I liked, maybe tried the following song which was never as good as the song I bought the album for and simply moved on to something else.

from Tommy Shaw was one of those albums.

Tommy Shaw released his 10-track 48 minute debut solo album in October 1984, the same year he left Styx after expressing dissatisfaction with the direction of the band into more pop and soft rock compared to a harder rock edge Shaw preferred. Eventually, Shaw returned to Styx in 1995 and today continues a pretty hardy tour schedule with the band.

Shaw wrote or co-wrote all the songs on Girls With Guns while playing guitar and providing vocals. He brought along a number of musicians to help including drummer Steve Holley who played in Paul’s McCartney’s band Wings and keyboardist Peter Wood who worked with Pink Floyd as a touring and session member. “Girls With Guns” reached #6 on the Billboard Mainstream Rock Tracks chart and hit a high of #33 on the Billboard Hot 100. “Lonely School” the second single topped out at #60 on the Hot 100.

I never listened to Girls With Guns in its entirety and likely got two songs into it on a few occasions before popping it out of the tape deck and slipping something else in. Therefore, I am truly hearing much of the album for the first time. So, let’s try a track by track breakdown and see how it goes:

1. Girls With Guns – The sole reason I bought the album. Great song, unfortunately the shortest of the lot. Just as it gets started it fades out.

2. Come In and Explain – A harder, edgier song. Comes in heavy after the quick paced melody of “Girls With Guns.” Shaw reaches deep on the vocal work and you can hear the Styx influence here but this works as a Tommy Shaw tune.

4. Heads Up – Starts off a little goofy (almost like TV show theme song) but gets right into the melody. Your basic soft rock song. Nice guitar solo to close it out.

5. Kiss Me Hello* – This could be a Styx song. Pretty theatric, lots of elements incorporated with piano, synth, some varying drum work and bit of an odd chorus. It sounds at times like a musical score then it and loses direction halfway through. It’s the longest song on the album with the extended version adding an extra two minutes.

6. Fading Away – This is not a great song. The final minute simply repeats the exact same chorus and music rhythm.

7. Little Girl World – This is a great song. Shaw in fine form melodically.

8. Outside in the Rain* – Check out these insightful lyrics: “You can lead a horse to water/But you can’t make him drink.”

10. The Race Is On – This song starts out with a saxophone. But you know what? It’s actually not a bad song. Shaw gets a good grooving rhythm going on this one.

The danger of virtuosos of well-known bands doing their solo things is the inevitable comparisons and cross-references that are usually made. Well, apart from the fact that with a cover shot of a hairstyle that looks like, erm….., a Girl (with a blowdryer), the music is actually quite nice. Don’t expect fully fledged Styx with the flourishes and frills, it may disappoint if you are looking for that. Ironically enough this was released at a time when Tommy had left Styx because of his dissatisfaction with the general direction Styx had moved into with a softer rock and general pop approach. So this album has the occasional hard rocker but the overall mood and content is more even handed and has good vocal harmonies and good backing with his chosen musicians. I enjoy his guitar playing. A pleasant listen, and a nice diversion. 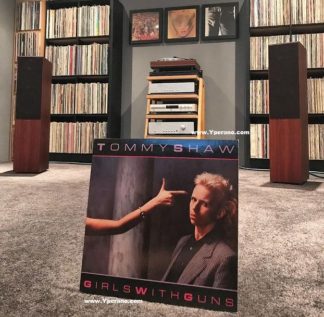