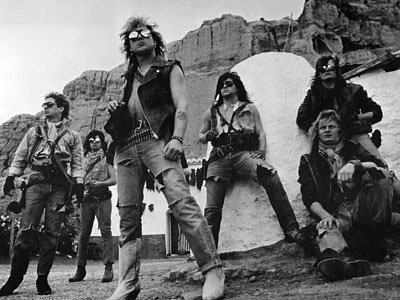 Tobruk was an English rock band, formed in 1981 during the NWOBHM movement, their sound was more melodic and polished After signing to EMI (Parlophone) in 1984 Tobruk went on a club tour before playing some dates with Diamond Head. They also toured the UK supporting UFO.
They then ventured to Philadelphia to start recording their debut album, also titled ‘Wild On The Run” [(Parlophone / EMI) 1985]. Lance Quinn from Lita Ford and Bon Jovi-fame co-produced the album with the band. The album was released in May 1985 and tours followed supporting UFO, Tokyo Blade and Manowar.
A second album was released through FM Revolver, called ‘Pleasure + Pain’.
Then singer Tony Martin, joined but nothing came of it and the band split for good. Martin went on to join Black Sabbath. Tobruk guitarist Nigel Evans spent some time touring with Shy.
Tobruk vocalist Snake (Stuart Neale) also had a stint in an early incarnation of The Wildhearts but never recorded officially with them, although some demos were produced. Mike Brown played bass in a short-lived band with Alan Kelly (drummer, ex-Shy) called Why The Rabbit shortly after Tobruk broke up. Keyboard player Jem Davies and drummer Eddie Fincher started the band Midnight Blue with one-time Yngwie Malmsteen and Rainbow (band) singer Dougie White and recorded ‘Take The Money And Run’ circa 1994. Davis also toured with UFO and had stints in Praying Mantis and FM.