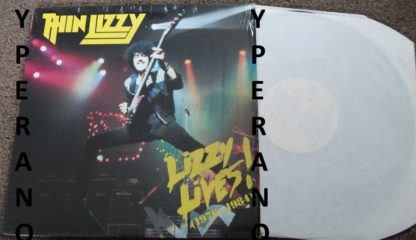 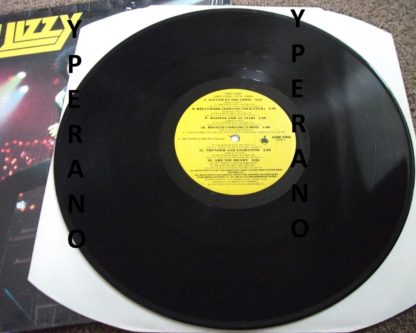 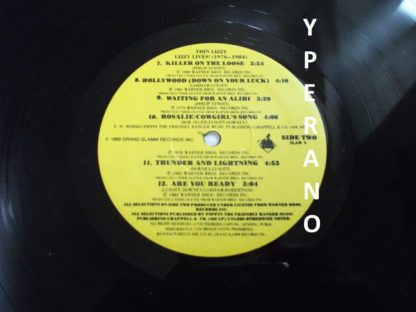 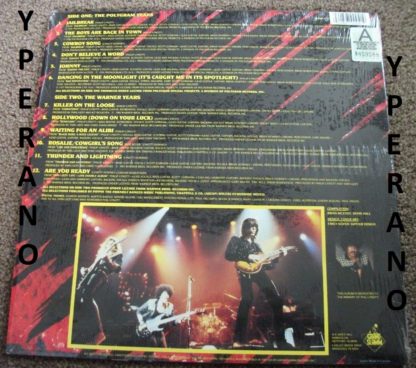 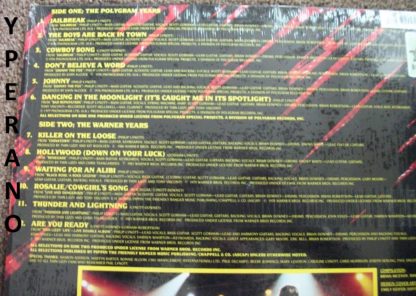 The back sleeve of Lizzy Lives! (1976-1984) notes that this album is dedicated to the memory of Philip Lynott.  Issued by Grand Slam Records in the states, the album is divided by the Polygram years and the Warner Brothers years.
Side A of the LP features six selections from 1976 and ’77, when Lizzy hit their stride. Leading off with the energized pairing of “Jailbreak” and “The Boys Are Back in Town”, the anthology album starts off incredibly strong. The momentum is carried on with “Cowboy Song” and “Don’t Believe a Word”. The material from the Polygram era is filled out with “Johnny” and “Dancin’ in the Moonlight”.  The Warner Bros. days are represented by “Killer on the Loose”, “Hollywood (Down on Your Luck)”, “Waiting for an Alibi”, “Rosalie”/”Cowgirls Song” (live), the storming “Thunder and Lightning” and the amped-up “Are You Ready” (live).
It is a muscular set of prime time Lizzy tracks.
KNOCK IT BACK!
Track 1, 2 and 3 are taken from “Jailbreak” (1976).
Track 4 and 5 are taken from “Johnny the Fox” (1976).
Track 6 is taken from “Bad Reputation” (1977).
Track 7 is taken from “Chinatown” (1980).
Track 8 is taken from “Renegade” (1981).
Track 9 is taken from “Black Rose” (1979).
Track 10 is taken from “Fighting” (1975).
Track 11 is taken from “Thunder and Lightning” (1983).
Track 12 never appeared on any of their studio albums.

Killer On The Loose

Lizzy’s most controversial song was a Top 10 hit in 1980, when the Yorkshire Ripper still had Britain in a grip of fear. It was creepy how Lynott hissed: “Don’t unzip your zipper… cos you know I’m Jack The Ripper.” The song’s dark power made it the guiltiest of pleasures.

Dancing In The Moonlight (It’s Caught Me In Its Spotlight)

The hit single from Bad Reputation is all about the groove laid down in Lynott’s slippery bass lick. Lizzy liked to play hard, but on this song they played it cool, and with such a lightness of touch – from the finger-clicking intro to a smooth sax solo from Supertramp’s John Helliwell.

In the title track from the band’s definitive studio album, everything about it is badass: that first booming, ominous power-chord, the heavy vibe throughout, the police siren wailing amid the spiraling tension, and, of course, the most famous tautology in rock’n’roll: “Tonight there’s gonna be a jailbreak/Somewhere in the town.”

In this blistering hard rock song from the Johnny The Fox album is the quintessential Lynott lyric: “Don’t believe me if I tell you/’Specially if I tell you/I’m in love with you.” It was originally a blues number, and that’s how Lynott and Gary Moore cut it, brilliantly, in 1978.

Waiting For An Alibi

Gary Moore lit a fire in Thin Lizzy on Black Rose. Waiting For An Alibi, a Top 10 hit, is the band’s most electrifying song. Driven by Lynott’s killer bass-line and taut narrative, it has a glorious twin-lead riff and a lightning-bolt solo from Moore. Gorham’s response? “Fuck you, Gary!”