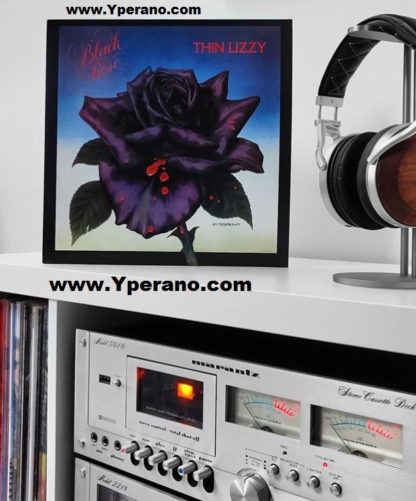 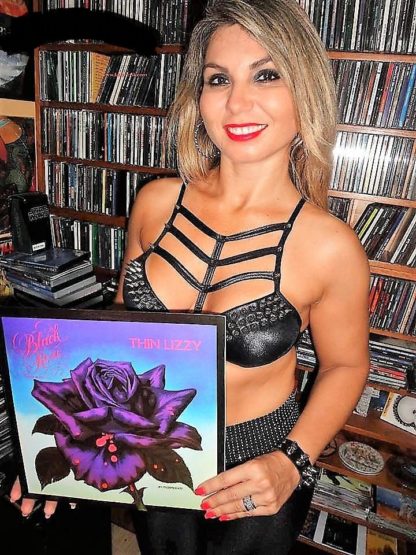 Black Rose is their strongest album, in terms of songwriting and tight playing. Vagabonds is my favorite album by them, but I realize that in sheer musicianship, this is their best. Every song is pitch perfect, with maybe My Sarah being the only low note. It’s still a great song, but not as great as the others. The epic title track is the best fusion of rock and Celtic that’s ever been made. It’s got one of the greatest solos that I’ve ever heard, incorporating Celtic motifs into an awe inspiring finale. It quotes from past Lizzy songs, so it almost seems like the song, and the album, itself, is a wrap up of Thin Lizzy’s career, and it’s how I like to see it, this album being the last Lizzy album, the culmination of the greatest hard rock band of all time.
Black Rose: A Rock Legend is the ninth studio album by Irish band Thin Lizzy, released in 1979.
The album debuted at its #2 peak in the UK album charts and is the band most successful studio album to date. For the first time rock/blues guitarist Gary Moore stayed in the band long enough to record an album having had previous stints in 74 and 77 as well as working with Lynott in the rock band Skid Row in the late 60s and early 70s.
The album included the second song Lynott wrote about a member of his family entitled “”Sarah””, the first song by this name having appeared on 1972 Shades of a Blue Orphanage. This version however was about his daughter.

Black Rose: A Rock Legend would prove to be Thin Lizzy true classic album (the last produced by Tony Visconti). Guitarist Brian Robertson was replaced by Gary Moore prior to the album recording. Moore had already been a member of the band in the early ’70s and served as a tour fill-in for Robertson in 1977, and he fits in perfectly with Lizzy heavy, dual-guitar attack. Black Rose also turned out to be the band most musically varied, accomplished, and successful studio album, reaching number two on the U.K. album chart upon release. Lizzy leader Phil Lynott is again equipped with a fine set of originals, which the rest of the band shines on — the percussion-driven opener “”Do Anything You Want To,”” the pop hit “”Waiting for an Alibi,”” and a gentle song for Lynott newly born daughter, “”Sarah.”” Not all the material is as upbeat, such as the funky “”S&M,”” as well two grim tales of street life and substance abuse — “”Toughest Street in Town”” and “”Got to Give It Up”” (the latter sadly prophetic for Lynott). Black Rose closes with the epic seven-minute title track, which includes an amazing, complex guitar solo by Moore that incorporates Celtic themes against a hard rock accompaniment. Black Rose: A Rock Legend is one of the ’70s rock classics. 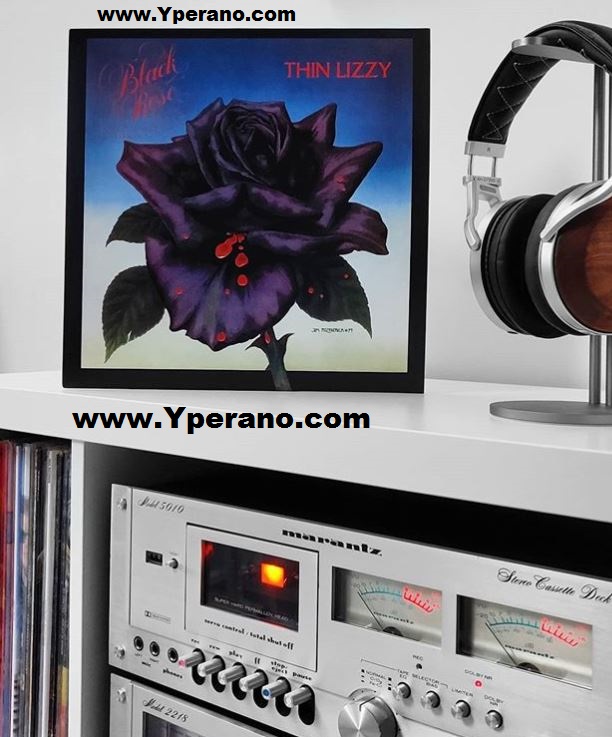 Do Anything You Want To

This Top 20 hit from 1979 had such a swing to it – in Brian Downey’s rumbling backbeat, hammered out on kettle drums, and in the percussive, alliterative lyrics. In the fade-out, Lynott mourned Elvis, ad-libbing Blue Suede Shoes. “Phil sang it doing the leg-shake,” Gorham recalled. “The whole Elvis deal!”

Side two
“”Got to Give It Up“” (Gorham, Lynott) – 4:24
“”Get Out Of Here“” (Lynott, Ure) – 3:37
“”With Love”” (Lynott) – 4:38
“”Róisín Dubh (Black Rose): A Rock Legend“” (Lynott, Moore) – 7:06  Thin Lizzy drummer Brian Downey says this is one of his 10 favourite Thin Lizzy songs: “Gary Moore came into the band a couple of times to help us out when guitar players left, or disappeared, or didn’t turn up. And on Black Rose he played brilliantly. He came up with the idea for the riff, and we all waded in with our own ideas. That’s what makes Black Rose really special for me: everybody contributed something to the song, and it came out brilliantly”

SUPER CLASSIC album from rock legends Thin Lizzy. “”Get out of here”” is written by Phil Lynott with James ‘Midge’ Ure, better known as the lead singer of synth icons Ultravox? it is synth, but it is good in all cases. And Midge was -for a short while- the live guitarist in the U.S., Japan and UK tour 1979th. Black Rose is their strongest album, in terms of songwriting and tight playing. In sheer musicianship, this is their best. Every song is pitch perfect. The epic title track is the best fusion of rock and Celtic that’s ever been made. It’s got one of the greatest solos that I’ve ever heard, incorporating Celtic motifs into an awe inspiring finale. It quotes from past Lizzy songs, so it almost seems like the song, and the album, itself, is a wrap up of Thin Lizzy’s career, and it’s how I like to see it, this album being the last Lizzy album, the culmination of the greatest hard rock band of all time.

Recorded in Paris, while Philip Lynott and Scott Gorham were strung-out on smack, Thin Lizzy’s Black Rose: A Rock Legends showcases hired-gun Gary Moore. Throughout the turbulent ’70s, Moore filled-in when personnel issues rocked the Lizzy ranks. While Lynott scored the majority of the songs for the inspired Black Rose LP, it was Moore and producer Tony Visconti that held the sessions down.

Issued in 1979, the diverse collection of cuts opens with confidence via “Do Anything You Want To”, which is chased by the ballsy “Toughest Street in Town”, and the politically-incorrect “S&M”. “Waiting for an Alibi” was issued as a single, while the dark “Got to Give It Up” serves as Lynott’s admission of guilt when it came drug abuse. Unfortunately, the excess only incresed, and Philip’s days were numbered.

The mellow “Sarah” and “With Love” shade the LP, which closes in epic form with the lengthy title track. Pulling from Lynott and Moore’s proud Irish roots, “Roisin Dubh (Black Rose) – A Rock Legend”, builds over the course of the intense number, which incorporates tradional scores, as well as original arrangements, that combine to punctuate Lizzy’s ninth studio album. It is a testament to the greatness of Black Rose, as well as the group that recorded so many influential rock songs, that Axl Rose’s right arm is inked with the Black Rose image.

The 2011 expanded edition of Black Rose: A Rock Legend adds a bonus disc of ten tracks, which includes a slow take on “Don’t Believe a Word”. The remastered release is mandatory owneship for any fan of Thin Lizzy. The alternate version of “Toughest Street in Town” shreds… equal to the album version, Gary Moore’s fierce solo augments the score-the-hard-way rocker, while Lynott’s lyrics dwell on down-and-out real life issues.

An absolutely immense album, and whilst not produced by Thin Lizzy’s best line up, Gary Moore’s contribution on this album is fantastic.

Some real classic songs here (too many to mention) – but surely ‘Roisin Dubh’ is one of the all time air guitar greats!

Key Track: Waiting For An Alibi

what makes this album outstanding is the dual guitar attack of Scott Gorham and Gary Moore.  No radio hits like jailbreak but all around probably a better album every song is amazing.

Absolutely my favorite Thin Lizzy long play. The dual guitars of Gary  Moore and Scott Gorham are almost otherworldly. This album rocks and the lyrics are spooky. All the talent in this band ( with the exception of Brian Robertson who is ably replaced by Gary Moore) comes together on this release and they never get there again. That said, this is one of the best classic rock recordings of all time.

Got to Give It Up: In the title and lyrics of this sinister track from 1979’s Black Rose was a self-fulfilling prophecy. “I’ve been messin’ with the heavy stuff,” Lynott confessed. The song began as a heroin blues and ended in wild abandon – as if he knew, even then, that he was already too far gone. 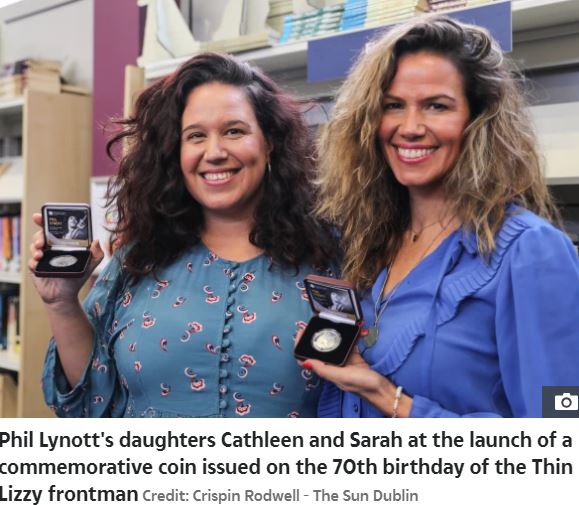 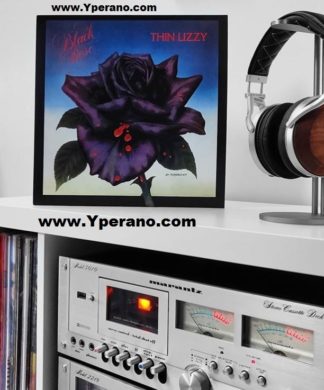