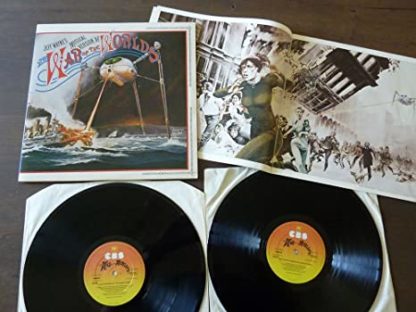 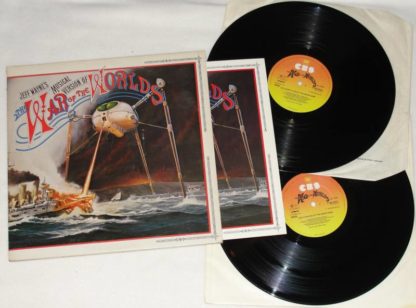 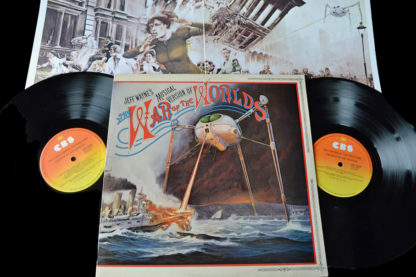 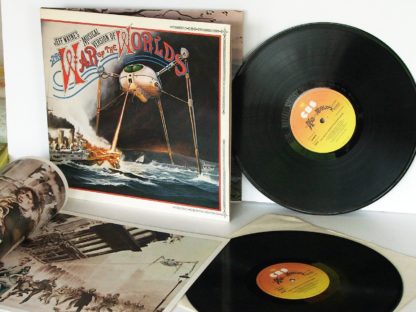 The War of Worlds (Jeff Wayne’s musical version of) 2LP with a book 1978 Cover is tatty, both vinyl records and book are near mint. Phil Lynott of Thin Lizzy, etc. Check audio (whole album).

5.0 out of 5 stars Bloody Fantastic!
Jeff Wayne is a total Genius and the album is sounding as fresh as if it was recorded recently.

5.0 out of 5 stars Fantastic piece of the 1970s British music
I love this album! It was the first album I ever bought in about 1979. I’d been badgering people for some money towards it for my eighth birthday and then, when the day finally came, I remember coming back on the bus with it proudly tucked under my arm. The original LP had a large picture booklet with some fascinating paintings of the Earth under the rule of the martians – I particularly remember the one of the crows picking at the flesh of hoods of the martian tripods.
This is a very unusual record that is quite unlike anything else before or since. It features superb musicianship with classic thumping 70s basslines from the excellent Herbie Flowers and top vocal performances from the likes of Justin Hayward, Phil Lynott and David Essex. Richard Burtons narration is hypnotic and the words are strangely poetic in a way HG Wells’ original book isn’t.
The recording still sounds just as good to me.
If you have never come across this album, I would highly recommend it as a strange and satisfying listening experience. If you had it years ago, why not renew your acquaintance with this 70s classic?

5.0 out of 5 stars A real, long overdue treat for fans.
This is an excellent package for die-hard fans of this epic work. It serves to remind us how innovative and powerful this album remains today. Although the musicians were well known, they weren’t all big name stars and its amazing to think they produced music and atmospheres of this quality. Imagine some of their equivalents today producing such work. No, I can’t either!
The artwork in the book and the package in general is both beautifully and lavishly presented. The original paintings are here as with the double vinyl release. Overall, this is a fascinating, worthwhile package.

5.0 out of 5 stars ULLAH!…indeed!
Many people may not like the rather Prog-Rock music, but to those who do this album has it all.
The sound is jaw dropping. I have never heard the music so sharp and clearly defined. Vocals stand out, guitar parts that were once hidden deep in the stereo mix now have more intensity (listen to The Heat-Ray). The synths sound as if they are plugged straight into your amp and whirl around the room. There is a lot of dramatic use of panning, front to back, left to right etc and whilst this would ruin most music in TWotW it is all part of the drama. At times the music thunders through your speakers at others it is soft and rolling (The Red Weed).
Worth every penny!!

Be the first to review “The War of Worlds (Jeff Wayne’s musical version of) 2LP with a book 1978 Cover is tatty, both vinyl records and book are near mint. Phil Lynott of Thin Lizzy, etc. Check audio (whole album).” Cancel reply 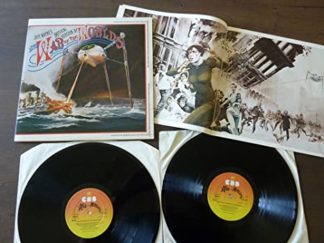 You're viewing: The War of Worlds (Jeff Wayne’s musical version of) 2LP with a book 1978 Cover is tatty, both vinyl records and book are near mint. Phil Lynott of Thin Lizzy, etc. Check audio (whole album). £6.99
Add to basket