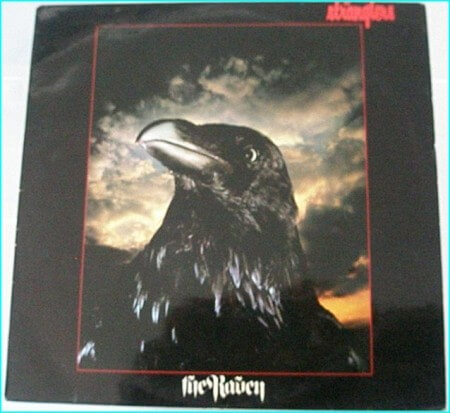 The Stranglers: The Raven LP. 1979 UK with inner. Check videos

“The Raven” sold well, reaching No.4 in the UK Album Chart, although it is believed it could have made No.1 but for an error in the chart. The Police hit No.1 despite their album not yet being released, leading to controversy that the Police album was mis-credited with sales of “The Raven”. Although the album was successful, “The Raven” only spawned one top 20 single, “Duchess”, with “Nuclear Device” only reaching No.36

This is the version without the ravens picture as a hologram.

5.0 out of 5 stars FIND ME A NEW DIRECTION
1979s THE RAVEN was like a breath of fresh air to my ears. The sound is more thoughtful and the instruments easier to differentiate and place, with a production designed to emphasise the gaps, so to speak, yet being far from spartan as a whole. And even though the theme of the album (Viking/Nordic symbolism) peters out after only two tracks, theres still a cohesion that insists you play these songs in order.
Its roughly 50/50 in the writing and performance stakes on THE RAVEN and at this point neither HUGH CORNWELL nor JEAN JACQUES BURNEL are significantly dominant or more accomplished than each other as songsmiths. But it doesn’t matter anyway, because each song compliments the next and so on. Highlights include the title track, DEAD LOSS ANGELES, DON’T BRING HARRY (with a beautiful guitar solo), MENINBLACK and GENETIX (DAVE GREENFIELD providing his usual ought-to-belong-on-some-kind-of-creepy-register vocals). Even the bonus tracks are a delight, especially BEAR CAGE, a dinky little number with a typically flat (again, of the time) Cornwell delivery. Marvellous stuff.

And another point worth mentioning: after all these years, theres still nothing to compare in sound or texture to THE RAVEN (if you’re in any doubt about that, just listen to the extraordinary SHAH SHAH A GO GO). Timeless? Maybe not. But unique? In spades.

So, a few reasons why the album is worth owning. You’ll no doubt discover the rest for yourself.
VERY HIGHLY RECOMMENDED
——————————————————
5.0 out of 5 stars The absolute peak
This album is the Stranglers finest hour. Following the fascinating ‘Black & White’ which highlighted two distinct and developing sides to the Stranglers music – the lighter, faster,melody flooded White side with the darker, slower, spikier more challenging Black, this LP kind of mixed the both into a wonderful collection of intelligent songs that still entrance, intrigue and envelop you 22 years later. Gone are the naive, ‘notice me’ brutal lyrics of the early songs, seceded by an international theme born of tours beyond bristol, bolton and birmingham. Here each of the four players dance with and around each other in musical games – each offering different parts that somehow complement to add to a gorgeous whole on tracks like Genetix, Baroque Bordello and Ice. Many of the songs feature very strong, very intelligent opening instrumental passages that never over stay their welcome but transform into a seemingly separate song in an instant – shah shah a go-go’ is a perfect example. The drum patterns are very inventive too and add to the layered, textured feel of a lot of the tracks. And then there is ” the Raven’ – the title track and 5 minutes and 12 seconds of perfection. The sectional approach to the song, the bleak romanticism of the lyrics, the interplay of keyboard and guitar, the driving bass and the final ethereal, swirling last minute of synthesizer magic evoking the flight of ‘the Raven’ is just breathtaking at loud volume. This is The Stranglers’ masterpiece.
————————————————
5.0 out of 5 stars A flash of brilliance from The Stranglers.
This is the last album that features JJ Burnels fabulous grunting, aggressive bass sound in its full glory. This is an album from a band really hitting a peak with more excellent tracks than you can comfortably shake a stick at. The original sleeve was banned for having a less than flattering picture of an Australian politician on the inside. And that is a good indicator of the content. Political and social comment. Drugs and exuberant dark joy (along with a pointer toward their next release – the decidedly occult Meninback). It contains the fantastic ‘Duchess’ and one of the most accomplished tracks they ever released – ‘Don’t Bring Harry’.
——————————————————
5.0 out of 5 stars A timeless masterpiece
This is the album which showed The Stranglers to be a different proposition to their more acclaimed punk contemporaries. A dark, brooding, avant-garde masterpiece, recorded across Europe under the influence of a range of legal and illegal substances, it is not their most instantly accessible album. However, repeated listens reveal the depth and beauty of these songs as well as a band at the very top of their game.

There is not a weak song on the album. The juvenile lyrics of some of their earlier albums have been replaced with astute political observations, ranging across subjects as varied as the Iranian Revolution to the science of genetics. Moreover, “The Raven” was musically adventurous, with Dave Greenfields intricate keyboard work complementing Hugh Cornwells unique, unorthodox jerky guitar work perfectly. Together with the powerhouse rhythm section of bassist Jean-Jacques Burnel and the hugely underrated Jet Black driving the songs along, fans of Radiohead could do better than listen to an album twenty-five years ahead of its time. “Dead Loss Angeles” features two growling, duelling basses; “Shah, Shah a go-go” sees mad, robotic keyboard flourishes; even the lead vocal duties are shared between three – Cornwell, Burnel and Greenfield. Today, the album sounds as fresh as ever. Quite simply, a masterpiece. The title track remains arguably the best song they ever recorded.
——————————————————
5.0 out of 5 stars Flying high,
This truly is an amazing record. Its atmosphere is heady, psychedelic and immensely strange. The keyboards, and particularly the bass playing are on a different level to their other albums (simply observe the instrumental on ‘Nuclear Device’, which remains the best I have ever heard). This also has some good topical lyrics, particularly on shah Shah a go go’.
——————————————————
5.0 out of 5 stars The Stranglers’ masterpiece is no Dead Loss,
Here we find the Stranglers starting to evolve away from their punk roots and in the process producing their best album by far. Some punkier stuff is still there, such as the singles “Duchess” and “Nuclear Device”, but the more interesting moments are the album tracks that make up the guts of the album. Witness the stark and frugal beats and bleak synthesiser driven humour of ‘Meninblack’ (a song not about the Stranglers themselves, but a race of aliens who farm human beings !) the sinister monotone rumblings of ‘Dead Los Angeles’ and the wiry and (still) fresh sound of the title track. Best of all though is the driving and pounding big finish to ‘Genetix’ which closed the original version of the album with style. And here comes my only gripe: the extra tracks on this re-release add nothing and yet they distill the big finish of ‘Genetix’ as it no longer closes the album on this version. But never mind that, just program your CD player to play 1-11, sit back and lose yourself in the creative adventure that is ‘The Raven’. More innovative than ‘Rattus Norvegicus’ and ‘No More Heroes’ and more vital and urgent than ‘Dreamtime’ or ’10’ this album has style, power
———————————————————
5.0 out of 5 stars Fly straight… with perfection…
1979 saw the first release this album which is considered by many to be their finest.
The powerful instrumental “Longships” opens the album making way for the epic title track, which is still a live favourite when the band hit the road. This album includes some of the bands best and most commercial singles (“Nuclear Device” and “Duchess”), as well as exploring darker material including the way ahead of its time subject of “cloning” and also the bands interest in UFOs as on the eerie track “The Meninblack”, which became the title of the bands underated follow up album.
———————————————————
5.0 out of 5 stars Breathtaking and original,
The Stranglers made so many fine albums that its impossible to single one out as being their definitive effort. ‘The Raven’ is certainly my favourite, though. Their debut is on a similar level, but this album sees the band maturing with some finesse. It is the culmination of the experimentation which begins on the similarly-acclaimed ‘Black And White’ but boasts a little more polish and greater consistency. The homage of the exhilarating title track is juxtaposed against the more characteristic hatchet jobs which follow. No longer so concerned with misanthropy, The Stranglers continue the international put-downs begun on ‘Black And White’ with attacks aimed at the USA, Australia and Iran, all of them cutting to the bone.
‘Nuclear Device’ harks back to the bands earlier recordings as it derides the Australian nation, while the title track and ‘Duchess’ also provide conventional pop moments. Elsewhere, the music is accessible, yet with an oddball element. The intros to songs tend to be lengthy and catchy, yet give way to unusual arrangements. ‘Don’t Bring Harry’ is striking for its use of piano instead of organ.
They keep the two most chilling tracks for the end, however. The helium-voiced ‘Meninblack’ is a piece of genius (‘Human flesh is porky meat, tee hee’) which would be developed across the whole of the next album, while ‘Genetix’ is a disturbing reminder of science going too far.
Of the bonus tracks, ‘Bear Cage’ is the stand-out, a minor hit, if I remember correctly. ‘The Raven’ is a must for anyone who likes this band.
——————————————————-
5.0 out of 5 stars The Best Stranglers album,
Without a doubt, this is the greatest album recorded by the Stranglers. It was the first of their albums I had heard. If you ever want to really know about the Stranglers music,buy The Raven and I guarantee you will not be disappointed.

Be the first to review “The Stranglers: The Raven LP. 1979 UK with inner. Check videos” Cancel reply 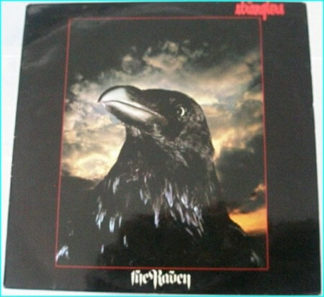