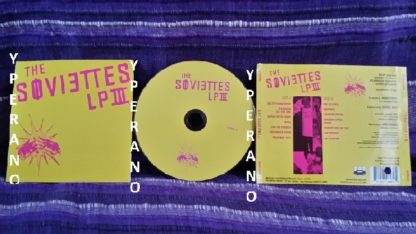 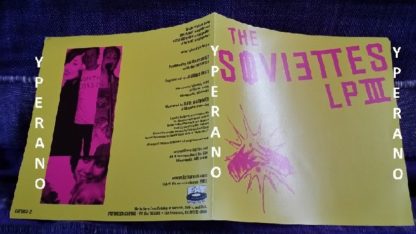 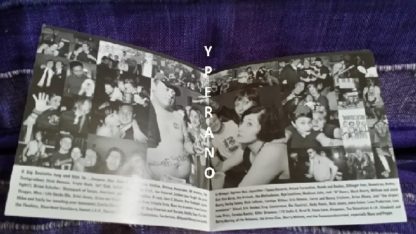 Fuck yeah! This yearâs summer album. Iâm of course talking about the third offering from Â¾ female band The Soviettes, simply titled LP III. Fat Wreckâs latest addition. LP III is an admirable album that will have you shouting along in no time. The Soviettes are a four piece speedy pop-punk band that play a spiced up faster version of Green Dayâs sound, fronted by a true diva that reminds me of Gwen Stefani from time to time. The Soviettes rip trough fourteen songs in barely 28 minutes, keeping the pace up in practically all the songs. Every band member throws in his or her two cents by contributing in the vocal department. This results in some nice interaction bits between drummer Danny and whoever does lead vocals, as well as some energetic shouts and catchy harmonies. Highlights are the single âMultiply and divideâ, the energetic âiParanoia Cha Cha Cha Do the stagger and one of the closers How do you like thatâ. All the songs are catchy and damn energetic when played fast though, so there are no real losers aboard here. If youâre looking for fast, damn catchy and energetic pop-punk that hasnât been completely overproduced or cut clean, this is a must buy. Donât wait. Buy

LP III is the third album by the Minneapolis punk rock band The Soviettes. It was released on CD on June 25, 2005

LP III was professionally reviewed only a few times. Allmusic enjoyed the album, noting its melodies and harmonies and calling it “”the Soviettes’ best-performed record yet””. The service did note the short length of the album as its downfall, but otherwise had no negative feedback and rated the album as a four out of five

5.0 out of 5 stars When you’re North Coast, September 8, 2005
The third album from the best band to come out of Minneapolis/St.Paul since The Replacements; I’m not sh*ting you. Punk bands are of one of two varieties these days–Southern Californian faux-political garbage rock or poppy I’m-a-35-yr-man-who-writes-songs-about-how-I-dont-like-my-parents-telling-me-to-take-out-the-trash. So when you get to listen to a punk band that actually sounds like a punk band (see The Epoxies as well) you take notice. What great about The Soviettes is their intense brevity and razor sharp hooks. This band will probably never release an album over forty minutes, unless it be a double-live album (PLEASE!!PLEASE!!!)

“”Multiply and divide”” is an opening track that sets a proper tone for the album as a whole. The Soviettes fluctuate between speed-chorus tunes and wickedly crafted gems that are a cut above. “”Middle of the Night”” and “”Thinking of You”” give you a glimpse of what pop punk songs should sound like. “”(Do)The Stagger”” and “”How do you like that”” are vicious tracks that demand you hunt this band out to chant along to as you pogo with a $1 beer in your hand. The outro chorus in “”(Do) The Stagger”” of “”C’mon”” is as delicious as having your scrotum crushed by the heel of a dominatrix (also see “”Rollergirls””).

This band is painfully proud of being from the Twin Cities. When you’re North Coast everyone sings, you drink GrainBelt Premium, and you take your punk in furious doses. The Soviettes LP III is a top five album of the year.

5.0 out of 5 stars Love this band!,
I got their other 2 records on Adeline but I like this one the best. They had a great song on the Rock Against Bush comp, and it on here again. Totally rockin record all the way through.

5.0 out of 5 stars Chomp Chomp Chomp!
Having seen The Soviettes on a couple of occasions, it hard not to compare the energy of the album with that of the ever so slightly better live performances. Multiply and Divide & Paranoia CHA CHA CHA have been talked about already, so I’d recommend several consecutive listens to a real hidden gem, What Did I Do?! Not at “”catchy”” as (Do)The Stagger but nonetheless infectious.

5.0 out of 5 stars The best Soviettes album!,
I bought this album as mp3 files, but enjoyed it so much that I bought the CD so that I could have it in a lossless format.

5.0 out of 5 stars Maybe the last truly great pop punk LP
…and if someone can dispute this, do feel free to set the record straight in Amazon “”reply”” section. The underground scene has “”grown up”” and moved somewhat away from pop punk toward more glam/power pop/protopunk inspired stuff by way of Sweet, T Rex/Marc Bolan, Cheap Trick, Nick Lowe, etc. (see the Giuda Racey Roller, the flavor of the month right now in a number of zines).
I sure miss bands – now broken up – who did pop punk the right way; including the gone but not forgotten Epoxies, The Chinese Telephones, the Steinways, and, most of all, the Soviettes. As amazing as the Soviette debut and sophomore efforts were, number 3 tops them all with excellent production…and pixie stick fueled speed which makes me want to pogo around the room on every listen. If you pick this up, and you are anything like me, you will bop your head frontward and backward so much that you’ll resemble a rooster on crack.

5.0 out of 5 stars Love this album,
There an awesome enthusiasm in this band. It got a great 90s vibe, which (in my humble opinion) sounds a lot like ‘No Doubt’. If you’re a more softcore punk rock fan, this is the CD you’d play in your car on the way to work or school and still be dancing to by lunch time. Definitely recommended. 🙂
Comment Comment

5.0 out of 5 stars Blistering High-Energy Punk Perfection!,
I have only recently discovered this band, and I cannot say enough good things about them. Absolutely the best punk band with female vocals since Sahara Hotnights, but perhaps even more energetic. I have been playing this album for days now without quickly tiring of it. I will definitely be checking out their other material. Soviettes ROCK!!!

5.0 out of 5 stars I love this CD.,
There nothing I can really say about it that hasn’t already been said in the other reviews. I just wanted to add my 5-stars worth. This CD is pure goodness. 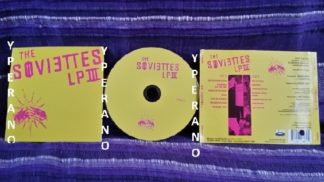