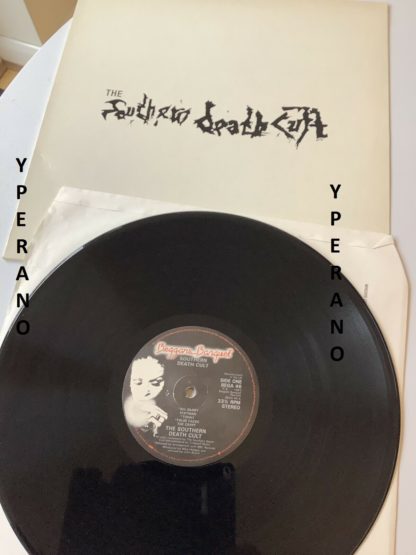 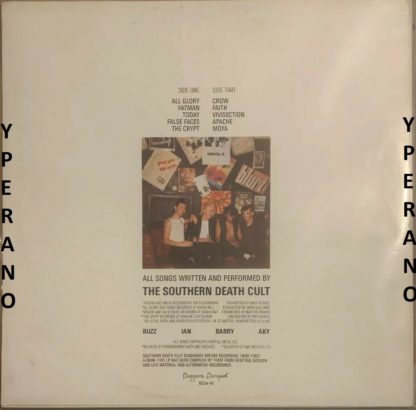 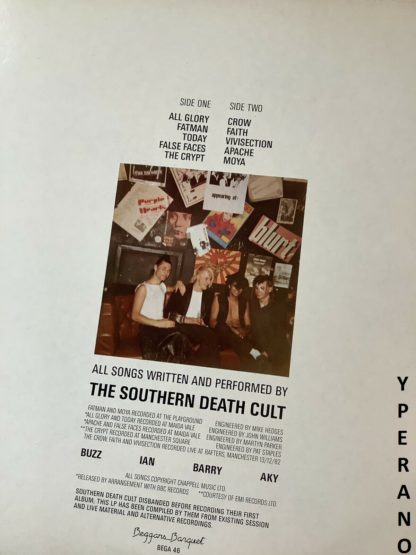 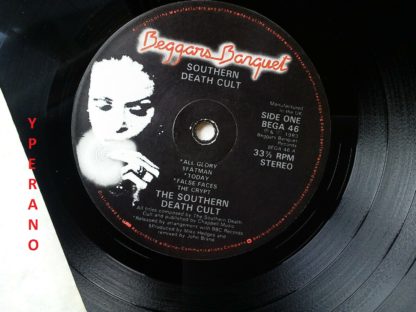 Southern Death Cult was a gothic rock band in the early 1980s. It is now primarily known for having given its lead singer and parts of its name to the multi-platinum hard rock band The Cult. Despite the similarities in the names, “Southern Death Cult” was distinct from “Death Cult”/”The Cult.”

In 1981, Ian Astbury had moved into a new house in Bradford and reportedly discovered a band rehearsing in the cellar. Astbury started performing alongside David Burrows (guitar), bassist Jepson and drummer Haq Qureshi (a.k.a. Aki Nawaz), and renamed the band Southern Death Cult, the traditional name of the Native American culture known today technically as the Southeastern Ceremonial Complex.
The Southern Death Cult’s first ever performance was at the Queens Hall in Bradford, England, on 29 October 1981. The set-list the band played was: “Crow”, “The Girl”, “Apache”, “Vivisection”, “Moya” and “The Crypt”, with a bootleg recording of that show in circulation. A sixth song was sometimes referred to as “War Song”, but its real title is unknown, although it used lyrics which would later become The Cult’s Spiritwalker’. The band never played it after 1981.
Southern Death Cult toured heavily in the UK promoting its triple A-side single “Moya/Fatman/The Girl”, which had gone to #1 on the independent charts, and peaked at number 88 in Top 100. The band toured with Theatre of Hate, and then succeeded in getting a slot opening for Bauhaus at the end of 1982, but Astbury disbanded the group after a show on 26 February 1983.
Astbury and guitarist Billy Duffy (of The Nosebleeds and Theatre of Hate) came together later in April 1983 to form a different band, with a similar name, first called Death Cult and then, after releasing a four song EP and a single, simply The Cult.

Southern Death Cults singles, demos, and some live recordings were later collected onto a ten song compilation album by Beggars Banquet, entitled Southern Death Cult.
The songwriting credits to “A Flower in the Desert”, off of The Cults Dreamtime album, are from the Southern Death Cult line-up which was originally titled “Flowers in the Forest” a credit which is sometimes omitted from the various different pressings of the 1984 album.

1983 Release
This, their first release of the compilation album The Southern Death Cult was issued by Beggars Banquet Records in 1983. It was released in the United Kingdom in LP [catalogue number BEGA 46]
The liner notes read:
Southern Death Cult disbanded before recording their first album, this LP has been complied by them from existing session and live material and alternate recordings.
The original track listing of the album is as follows:
A1 All Glory (i)
A2 Fatman (ii)
A3 Today (i)
A4 False Faces (iii)
A5 The Crypt (iv)
B1 Crow (v)
B2 Faith (v)
B3 Vivisection (v)
B4 Apache (iii)
B5 Moya (ii)
(i) Recorded 21 May 1982 for the John Peel show on BBC Radio One at Maida Vale 4 studio. Produced by John Owen Williams. Engineered by Martin Colley. First broadcast on 10 June 1982. It should be noted that during the original John Peel sessions four tracks were recorded: “Fatman” / “Today” / “False Faces” / “All Glory”. The other two tracks [“Fatman” and “False Faces”] have never been released.
(ii) Recorded at The Playground. Produced and engineered by Mike Hedges. Remix by John Brand.
(iii) Recorded 20 January 1983 for the David Jensen show on BBC Radio One at Maida Vale 4 studio. Produced by John Sparrow. Engineered by Martyn Parker. First broadcast on 24 January 1983.
(iv) Recorded at Manchester Square. Engineered by Pat Staples.
(v) Recorded live at Rafters, Manchester, England on 13 December 1982. 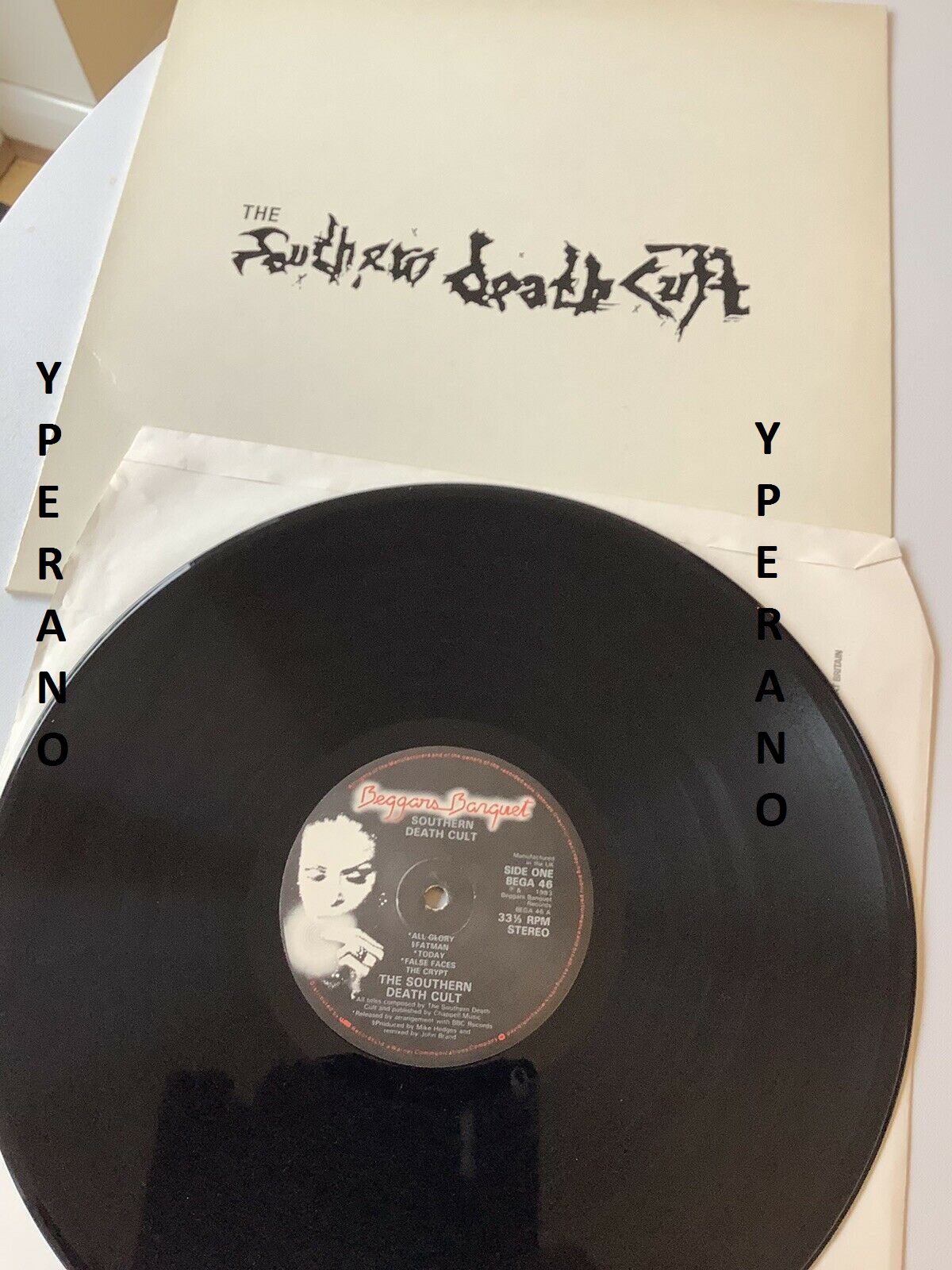 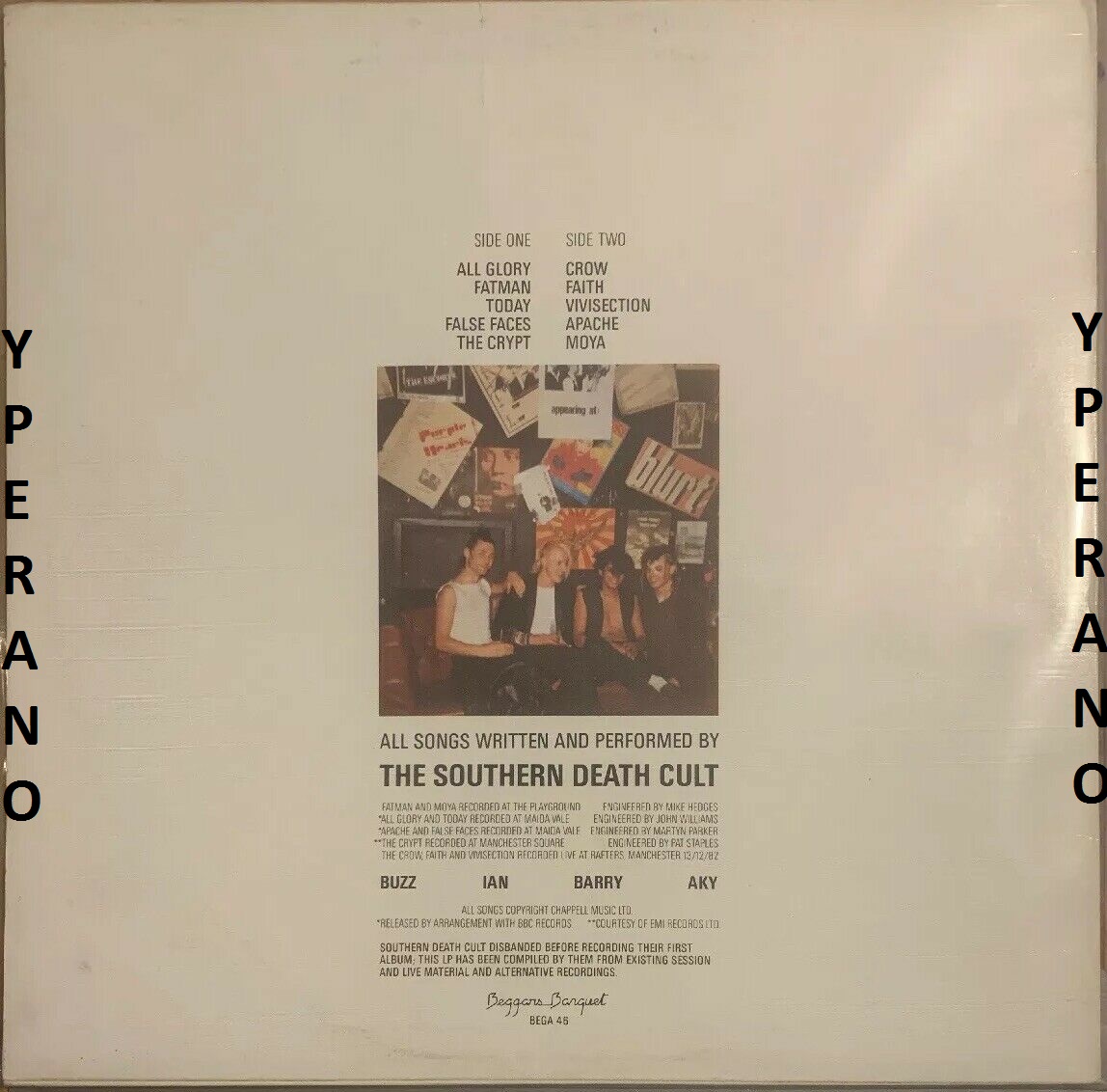 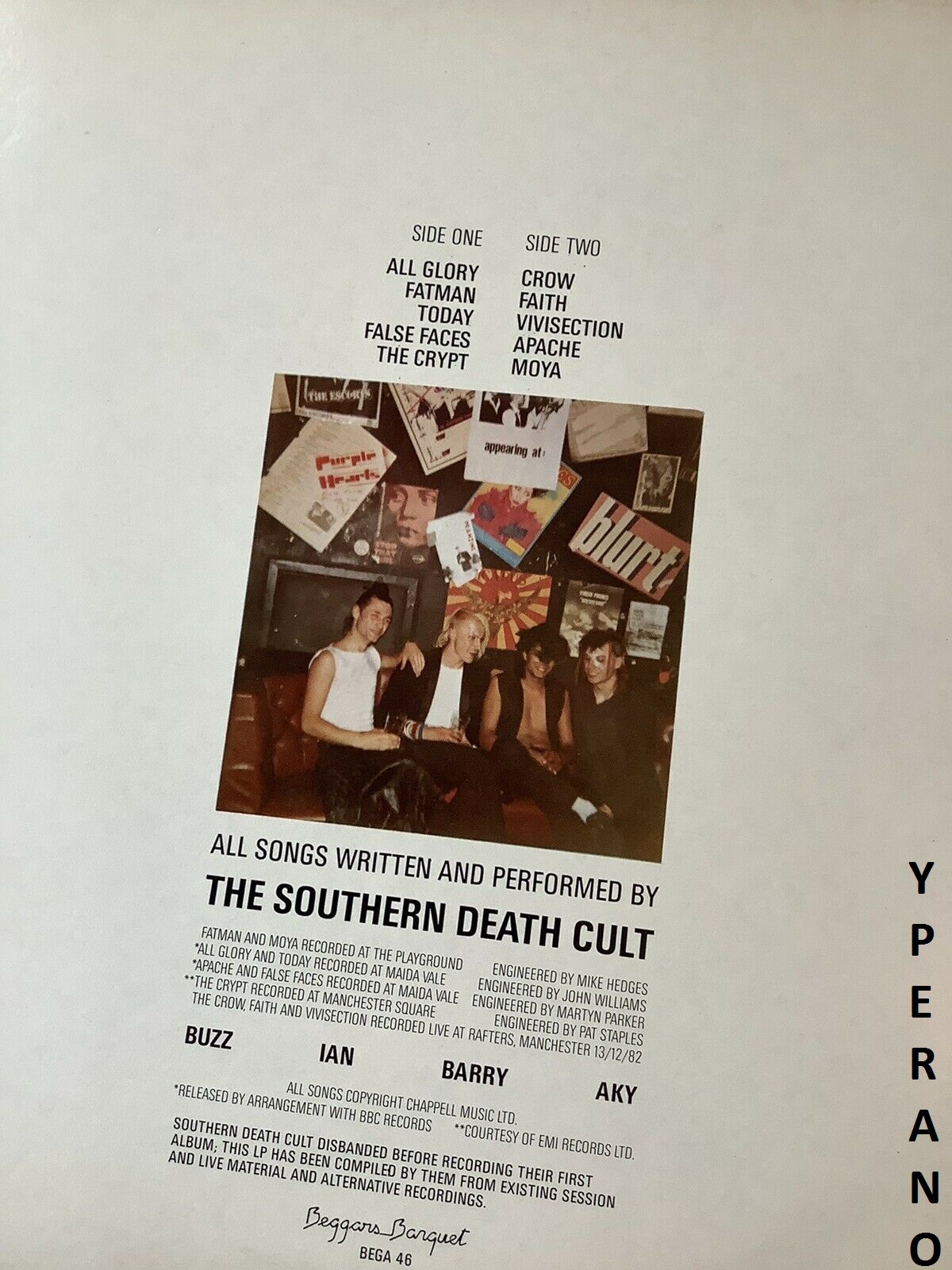 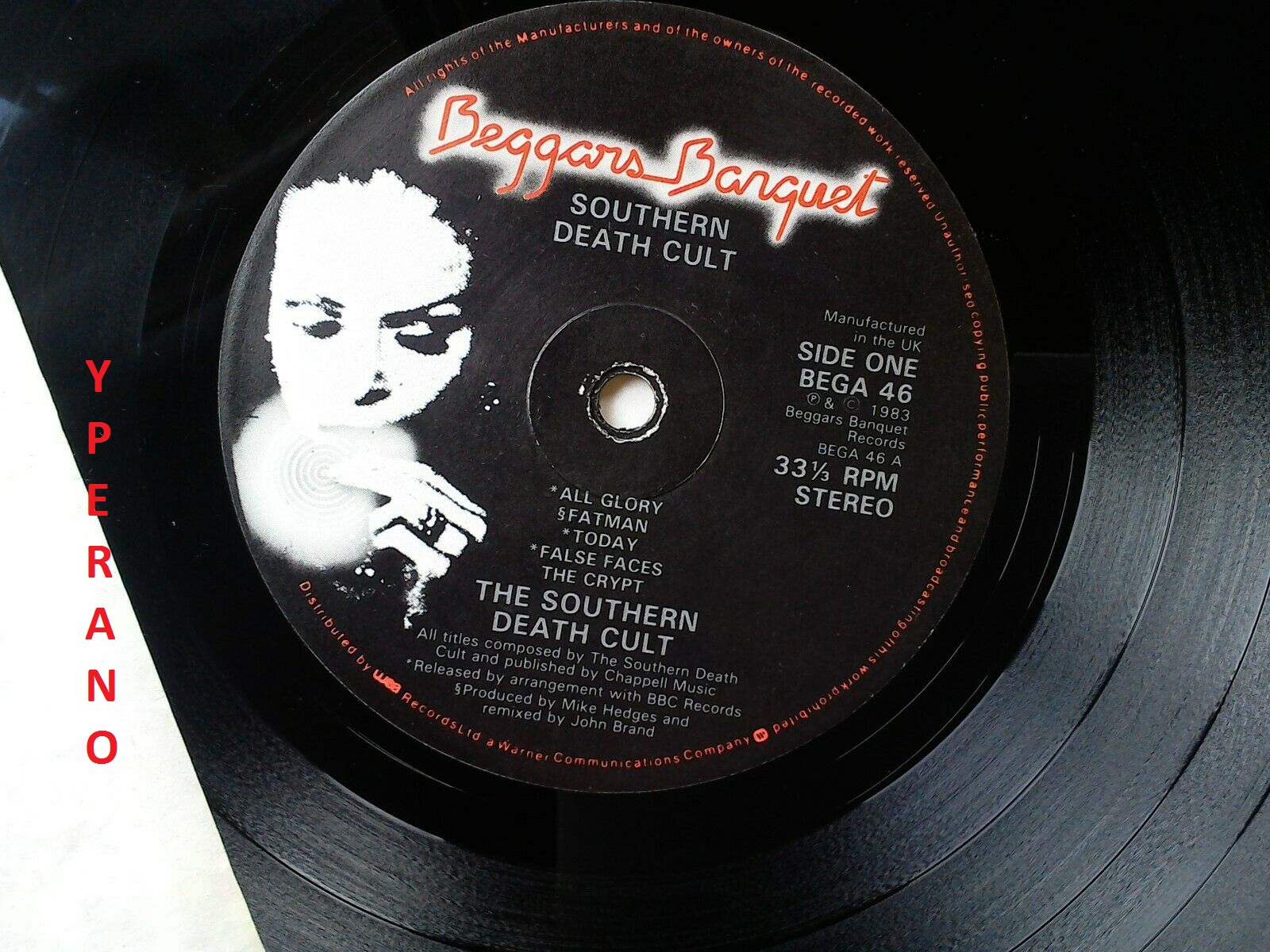 Be the first to review “the SOUTHERN DEATH CULT LP The first 1983 original release copy. Ian Astbury on vocals (THE CULT)!” Cancel reply 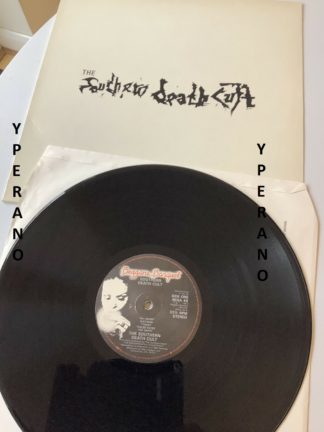