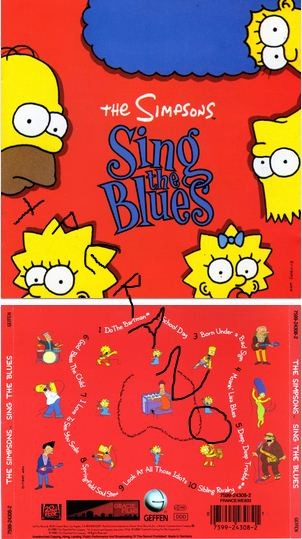 The Simpsons Sing the Blues CD. Music not featured in the series + cover songs! Check videos.

The Simpsons Sing the Blues is the first album released as an offshoot of The Simpsons. The album contains originally recorded music not featured in the series save for the first verse of the track “Moaning Lisa Blues” which was first featured in the episode “Moaning Lisa”, aired February 11, 1990. The album was released on December 4, 1990 and peaked at #3 on the Billboard 200.

An early musical number, “Do the Bartman”, leads the album as the first track and the first single released. It was an international success, including being the UK number one single on February 16, 1991, staying there for a further two weeks being certified Gold after selling over 400,000 copies. The second single released, “Deep, Deep Trouble” also did well in the UK, reaching number 7. Both “Do the Bartman” and “Deep, Deep Trouble” were released as music videos in 1991.

Different cast members lent their voices to the album with both new material and cover songs. There were a number of notable musicians who appeared on the album, including B. B. King, DJ Jazzy Jeff, Dr. John and Marcy Levy.

David Geffen, founder of Geffen Records, had the idea to record an album based on The Simpsons, to be released in time for Christmas 1990. The writers wrote humorous lyrics for the actors to perform over blues and hip hop. The voice actors for the series recorded the album in September 1990. The album was difficult to produce in between production for the second season of The Simpsons, which was due to premiere just two weeks later. The albums title was penned by producer, James L. Brooks. “We plundered a number of different styles for the record,” admitted creator Matt Groening in a 1990 interview. The disc contains an eclectic mix of old blues tunes such as Billie Holidays “God Bless the Child” and original songs such as “Deep, Deep Trouble”, which was produced by rapper DJ Jazzy Jeff and written by Groening.

Release:
The album faced great publicity before its release, with several details leaking out. Fox attempted to keep the record under wraps until negotiations with performers such as Michael Jackson were nailed down. One particular element that was highly publicized was Jacksons involvement, which was denied around the time of the albums release. “Oh, its so frustrating,” lamented Groening in a 1990 interview. “I said to a reporter a while ago that I would like to have this happen and it was printed as if it was true.” Early published reports attributed Jackson as the composer of “Do the Bartman”, which led to James L. Brooks issuing a press release apologizing for any misunderstanding about who actually wrote the song, instead revealing that Bryan Loren wrote the song. Fox also organized a media event around the album, pulling in nearly a half-dozen camera crews to interview and tape the would-be recording stars in action.

The album The Simpsons Sing the Blues was released on December 4, 1990 and was a success, peaking at #3 on the Billboard 200, making it the highest charting Simpsons album. The album was also a success in the United Kingdom, where it peaked at #6 on the albums chart and was eventually certified Gold. The lead single from the album, “Do the Bartman”, was released on November 20, 1990, followed by the unveiling of animated music video after the Simpsons episode “Bart the Daredevil” on December 6. After the Fox network premiere, the video was exclusive to MTV. The song wasn’t actually released as a physical single, which perhaps helped sales of the album. The music video for “Deep, Deep Trouble” debuted after “Barts Dog Gets an F” on March 7, 1991.

On December 14, 1990, the album was certified platinum, having sold over 1 million copies in its first week of release. Within a matter of weeks, the record was certified triple platinum by the Recording Industry Association of America, on February 13, 1991, for sales of over 3 million copies.

Legacy:
The Simpsons Sing the Blues is today regarded as a novelty from The Simpsonss early popularity. Shortly after the records release and success, record companies rushed to fashion music stars out of animated characters. In January 1991, Mattel announced plans to record a Barbie rock album titled The Look. At the same time, MCA Records was finishing work on an album based on the Mario Bros. characters. SBK and Geffen also enjoyed huge success with albums based on the film Teenage Mutant Ninja Turtles and The Simpsons Sing the Blues. The record soon became the fastest-selling album to emerge from a television show since the Miami Vice soundtrack in 1985. Disney also issued an album of rock songs sung by The Little Mermaids Sebastian. “Do the Bartman” inspired a dance, “The Bartman”, that was popular in early 1991

Be the first to review “The Simpsons Sing the Blues CD. Music not featured in the series + cover songs! Check videos.” Cancel reply 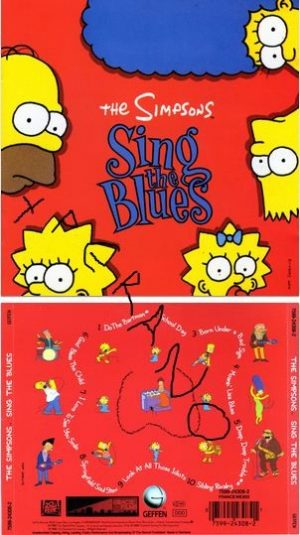 You're viewing: The Simpsons Sing the Blues CD. Music not featured in the series + cover songs! Check videos. £6.66
Add to basket