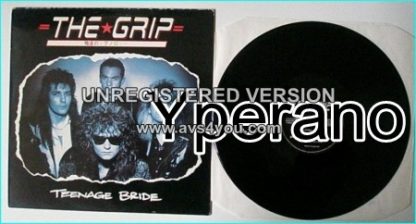 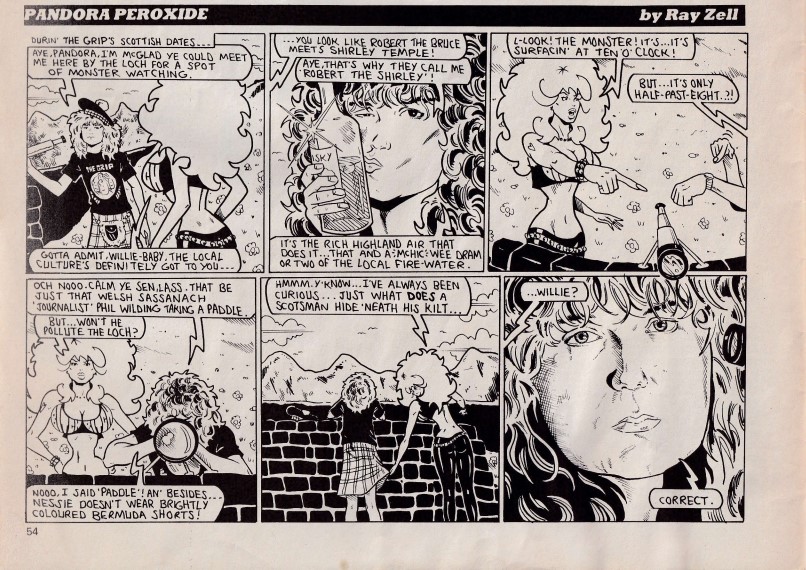 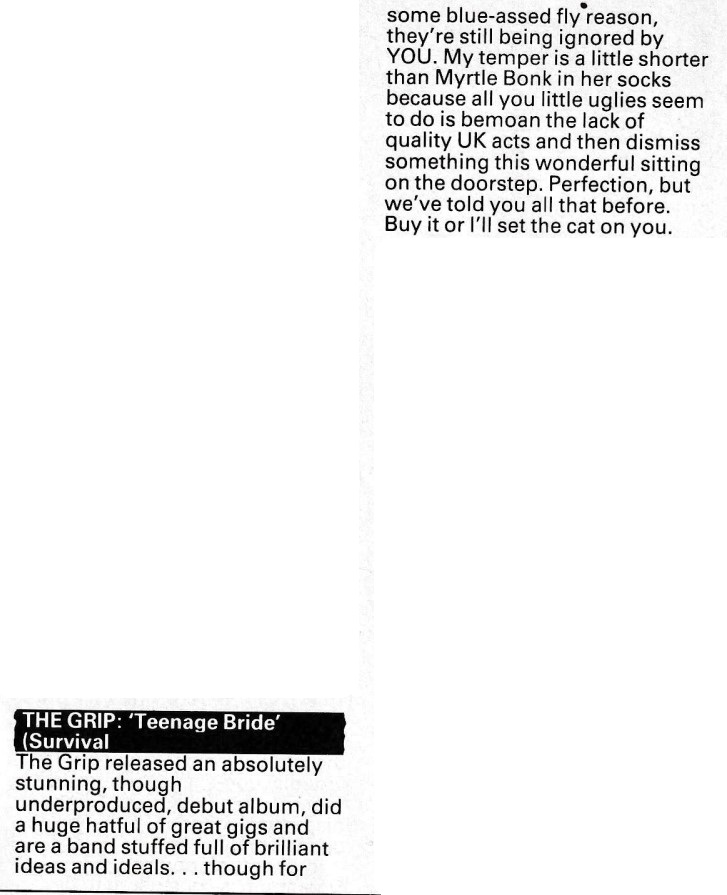 The Grip were touted as being “the next big thing” in certain circles of the UK music press. I don’t know why the band didn’t happen as they had some fine material. The production maybe could’ve been better, but there’s no doubting the song quality. Wille joined Honeycrack who experienced a similar ride i.e. next big thing …then nothing.

In agreement with the 2 comment above. In fact i was living in good old lovely England when this act came out and certainly it did some fuss back then but nothing more than some recognition. As my friend Rafo Phoenix said above ” THIS IS A GOOD FORGOTTEN RARITIE”…my rate,85/100

I remember the band. Sadly, they became somewhat of a joke in certain areas of the music press (Kerrang). As mentioned above, they were initially touted as the next big thing, then when they failed to take off, they kinda became a laughing stock. Certain writers at the aforementioned rag would often take pops at them and to this uninitiated music fan, it kinda made me not even bother seeking them out. Now in this age of youtube etc, I was able to judge them for myself.

Band history: The Grip knocked around the same London rock n roll streets as The Quire Boys and Dogs D’Amour  in the late 80s. Front man Willie Dowling was a charismatic chap with an ear for a fine tune and a face women would die for, either to have his looks or to kiss him. When they played Stevenage Willie being accosted by a rather scary local lady who had muscles some blokes would kill for, not Willie though , he was in the dressing room, hiding.
Willie also played with Chelsea and appears on their 1986 Rocks Off album. He also helped out on their Underwraps album in 1989. Since The Grip split in early 1990 Willie played in several bands, most notably Honey crack. Now he busies himself writing music for Films, TV Shows and Stage productions, anyway its rewind time, back to 1989 and their Teenage Bride single, a romper stomper of the glam bam thank you maam variety. Slade, The Sweet meet The Stones in a bar room lock-in with Cocksparrer climbing in through the toilet window. I prefer the b-side England Your Dead which is a right royal knees up with some mighty fine sentiments. Buy the single here, right now if you fancy some top notch Rawk’n’Roll.

KERRANG! ISSUE 79 October 1984
0K, OK no sooner do I start complaining that there simply weren’t enough good bands to write about than I stumble over no less than THREE! Actually, in my own defence, that’s not quite true – I knew about all three prior to my diatribe in the Silent Running feature but now they seem to be reaching a level of maturity that warrants some serious attention.

OK, so what about some names? First, there’s jai Gray Jay (no, I don’t know what it means either) who have just signed a deal with MCA Then there’s Cause & Effect, perhaps best described as a rock version of Duran Duran, which may alienate a lot of Kerrang! readers from the word go… but then you should just refer to my Komment piece of a few moons ago. And lastly, there’s the Grip . . .

The Grip instantly reminded me of another great glam / Metal / pop band in a similar vein, the Idle Flowers (Rene, whatever has become of you?), although the Grip are decidedly heavier and can turn their not inconsiderable skills to the most ardent Metal Maniac’s dream chords. The band is a three -piece based in London consisting of Willie on lead vocals and bass, Mark Keen (a man who could easily pass for a Mick Ronson clone – and that’s a compliment in my book since Ronno was my first ever guitar hero!) on lead guitar and backing vocals and Chris King who thumps things at the back.

BRIEF history, because these things tend to be extremely tedious and best got over and done with as quickly as possible. Willie used to strum guitar with premier punk/cult band Chelsea while Mark used to thrash and crash with some forgettable Metal band called Viza. Willie caught the tatter’s show and instantly recognised Mark’s guitar flurries and general fretboard dexterity as being “much superior to my own”. Losing no time in stealing the guitarist and moving himself over to bass, he had the nucleus of a band who could begin performing some of the songs he’d penned and stashed away for a rainy day. Recruiting old pal Chris from London pub band Double Agent to fill up the ranks, the Grip finally came into being after a “pathetically drunken rehearsal”. That was all last year. This year they’ve concentrated on recording and gigging and generally having a lot of fun. And why not?

Now, on to the interesting bit. What makes the Grip one of the Best Of British? Simple, they have the songs, the presentation and the performance. The Grip have a clutch of songs, any one of which could become a hit single; they are danceable, singable rockers that reach out and leap over barriers of definition. This is a band whose songs should appeal to practically everybody.

Not only that, but they also look good onstage and Willie is as natural a born poser and frontman as you could hope to encounter. He also has a very good voice (is this the ‘Identikit’ rock ‘n’ roll frontman?). Mark tends to stay a little too far in the background, but this will doubtless resolve itself in time. They play very tightly and with an all too rare sense of real tun and enjoyment (remember them?).

THIS BAND ought to be able to cross over to such a diverse audience (from Kerrang! to Jackie, if that’s possible) that their success should be inevitable. So far, curiously enough, there’ve been no real bites at the cherry record company-wise (I mean, what are these A&R people doing!?) which means, basically, that you, the record buying public, are being deprived of a rather excellent talent on the vinyl front. The easiest way to compensate for this dispiriting state of affairs, however, is to go out and see the band live. Fun and entertainment are guaranteed. Let’s all party down!

I CAN still remember the first time I saw the Grip. Willie’s ego-maniac lambasting of his audience as they stormed through their spot on the ill-fated ECT made it perfectly clear that he was going to make sure nobody – and he meant nobody – would forget his band.

A 5K album review was just a dream then, but wildman Willie – the Grip’s big -voiced bass-player – had the sort of undying faith that just could not be ignored. Since then I’ve seen the trio countless times in various venues – with not a single duffer amongst ‘em. Not a bad track record that.

So quite what went wrong at the Marquee is a mystery.

I’ve always seen the Grip as the ultimate party band – regaling their audiences with explosions of streamers at every available opportunity along with a collection of finely crafted, extremely danceable, pop/rock tunes littered with easily accessible Americanisms that should ideally allow them to scale the dizzy heights into commercial crossover success ‘Snake or even ‘leppard style.

Perhaps Willie had the same idea cos he was very quiet and even (to my amazement) a little subdued when confronted by a less than capacity, not to mention largely disinterested audience.

Professional to the core, the band played with all their usual fire and panache. Krasher held the band together with reliable accuracy; Mark poured out solos, riffs and runs in a molten stream; the fast-becoming-infamous whining cronies appeared to have slipped into a mutually assured groove, combining their movements in visual as well as harmony. Out front Willie bound the action together as he stalked the matchbox stage with all his accustomed confidence. And yet – despite the quality of their songs and show, something got lost between the stage and the audience.

I’m at my wits’ end trying to find a reason for this sudden attack of good ole British apathy. Maybe it s time to make the break and give the States a try, cos the Grip are just too good to waste. 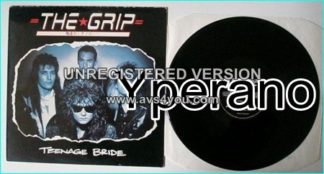