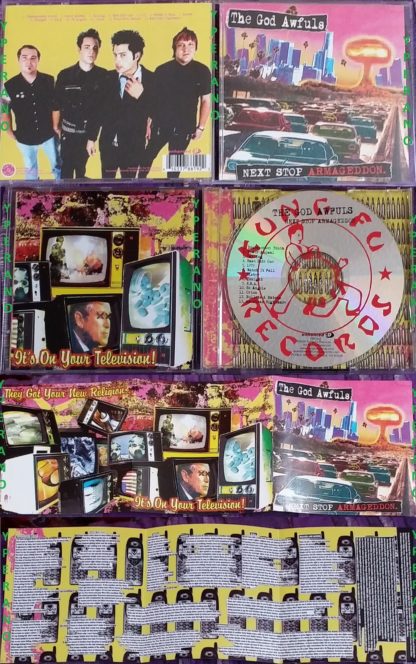 This is an Enhanced CD which contains both regular audio tracks and multimedia computer files.

L.A.s God Awfuls clash the rancid with the raucous on their energizing Kung Fu debut, opting for a faithful facsimile of punk rocks barbed and faded past instead of resorting to the posing homogeny of its mainstream present. That said, they do understand the Warped Tour nations clamor for a hook. Mouthpiece Kevin De Franco delivers his rants against consumerism, the National Rifle Association, organized religion, and being generally F’d over by society and the Man in an amplified impersonation of Tim Reynolds, who was already impersonating John Lydon and Joe Strummer. You get the idea: the God Awfuls brazenly acknowledge the punk practitioners of the past in every pick slide, power chord, and strained vocal chord of Next Stop Armageddon. Acknowledgement given, they dutifully reinvent the sting, and faithfully resubmit the vitriol. “Disconnected Youth,” “East Side One,” the subtle “N.R.A.” — the string section cheeze and preposterous poor baby power ballads of the modern mall-punk school are gored by rousing guitar solos, spit-flying and entirely believable potty mouth, and an overwhelming desire to play fast and get to the next fiery salvo. (Appropriately, the Greedy Bros. production leaves no breathing space between the screeds.) “Tonight” is the requisite Social Distortion hard-drinking anthem; “No Angels” updates the fightin’ in the streets manifestos of 1977, relocating the front lines to the vapid streets of Southern Cali; and the Oi! roil of “Orion” takes posing Neo-Nazis to task. Theres even a couple of nods to vintage hardcore, the best being the absolutely badass “Sister” (“You’re a f*ckin’ mess/F*ck you and your trust”), which is the God Awfuls’ version of that simpering broken romance crap the more pop than punk establishment tries to sell the kids these days. Next Stop Armageddon should come with a half-empty can of Carling.

5.0 out of 5 stars True Punk!,
I bought this CD after I Heard “Disconnected Youth” on channel 914 Music Choice Alternative Rock. And let me tell you,these guys are gonna be big. This CD is what I would call true punk. Buy it, and you will be listening to it for a long time.
BEST SONG: POWER ANIMAL
————————————————————-
5.0 out of 5 stars Best thing to hit punk in a while,
I picked this up after hearing that Kung Fu Records had signed on to distribute Stiff Little Fingers’ latest, Guitar & Drum, and I wanted to hear another band the label carried. That and I liked the cover. I did not expect to find a disc I would listen to almost every day since. This band is pure energy from start to finish. Next Stop Armageddon captures the raw power of early bands like The Vibrators, The Damned and the Sex Pistols and combines it with a more modern hardcore sound. Musically, the band is very tight and their sound is excellent. Lyrically, you get a band that has something to say and knows how they want to say it. The whole disc is phenomenal but, in my opinion, the stand-outs are “Disconnected Youth”, “Power Animal”, “Sister”, “American Nightmare” and my new favorite sing-along “N.R.A.”. If you’re looking for a punk album that gets it right, give this one a try, you won’t be disappointed.
————————————————————-
5.0 out of 5 stars Got Lucky,
This band is great! its so catchy and memorable. You can listen to it over and over and still love the songs.

To put it simply: It rocks m/
————————————————————-
5.0 out of 5 stars Original twist on an old favorite,
Picked it up just before seeing them open for The Vandals in San Francisco back in Sept. The sound clearly draws on influences from The Clash, and the Sex Pistols with unorthodox rockabilly guitar riffs on several tracks. Catchy melodies, high energy, and good lyrics. Hope they stick around for future releases….
————————————————————-
5.0 out of 5 stars This CD is a gem,
In the days of lackluster and uninspired punk rock music that makes up about 90 percent of the industry this CD is a diamond in the rough. I heard this band from a Tony Hawk videogame, where they were given their fifteen minutes of fame, and bought the CD some years. Had I known how amazing it truly is, I would have paid more money to get it sooner.

The music here is truly precious. Theres versatility and a ton of energy on this record, catchy hooks and driving beats through and through. This band draws influence from all the right bands to craft a sound that cannot be copied or mimicked. This CD is the real deal. The songs are guarenteed to get stuck in your head all day and the CD will spend a lot of time in your player, I promise.
Highlight tracks are “Power Animal” “Watch it Fall” “NRA” and “Bullets and Batons”

Be the first to review “The GOD AWFULS: Next stop Armageddon CD Enhanced. + video.” Cancel reply 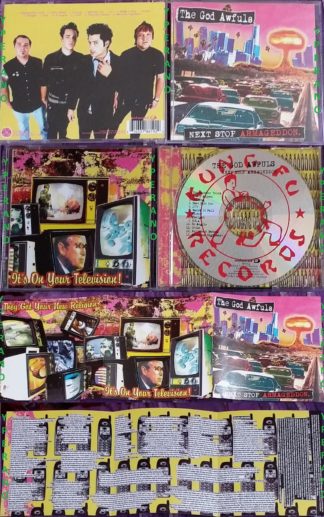