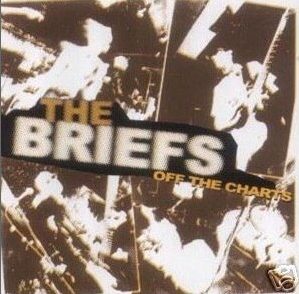 think late 70’s LA punk with 90’s punk energy, with the bounciest, most electrifying live performance. After touring together with The Damned, TSOL, The Rezillos and Queers, German no. 1 act “”Die Toten Hosen”” invited them as support act to their last big German tour 2002. (This 12 song CD incl. bonus tracks)
Keeping the flame alive. Classic sounds of The Boys! Add in some 999, Sham 69 and, why not, The Romantics….. and on the more modern side Red Planet. It`s effortless, bubblegum punk! The Briefs simply churn out a succession of two-to-three-minute gems, one after another, on and on until the 11 songs are finished and the new-found fan of the band is perfectly satisfied. Whipped Creamed punk rock sundae, please? Extremely Highly Recommended!

by Ricardo from Round Rock, TX Rating:
HOLY CHEESEBURGERS!!!!! this is probably my favorite cd from the briefs… AIN’T IT THE TRUTH!!! anyways… kinda sounds like the buzzcocks a tad… which means its fucking sick!!! get it now…

by Alex from Gilbert, AZ Rating: 5/5
This is an awesome CD. If you liked the Briefs CD ‘Hit after Hit’ then you will most likely like this CD. The songs weren’t quite as fast as the ones from hit after hit but they were definitely just as good. If you are a fan of the briefs then you really need this CD. I give it 5 *STARS*.

by Kevin from Houston, TX Rating: 5/5
It’s a band like this that makes me believe ‘punk rock’ is coming back strong! I’m so sick of all these whiny-emo-screamo-eye liner wearing suburbanites. Here is the real deal. The Briefs put on such an awesome live show, it made me search for their whole catalogue of music. This is a great record. You should get it right away. Punk Rock is back!

by David from Santa Teresa, NM Rating: 5/5
this is a good release. its snotty, middlefingered, sarcastic punk rock with a nerd twist thrown in there. they have a new disc coming out soon that should be just as good if not better. and their live show is one not to be missed, its a load of fun. you should really check these guys out, they are gonna get pretty big eventually

5.0 out of 5 stars Great album
These guys from the Pacific Northwest know how to put out a great pop punk album. They’ve got obvious Brit influences and the songs are really catchy.

5.0 out of 5 stars sounds old
when you first listen to the briefs, you would think that they are from the 70’s or early 80’s but you would be dead wrong because they are brand spank’n new. this is not my favorite briefs cd, i like hit after hit and sex objects better but this is still amazing so you should buy it

5.0 out of 5 stars Ska Punk, questionably the best?
Ok, well, these boys from the Northwest are the best punk meets ska band I’ve seen in a long time. I know my music, and this definitely hits the spot of great music. Fans of Operation Ivy, Sublime, Bad brains, etc. will love this band. This is my first Briefs CD, but it lead me to buy their shirt, and patch.

Now to the music. Its real punk rock, but not hardcore stuff, with a little bit of ska, that blends in perfectly. Take my word, there are some great stuff on this cd. My personal fav song on this cd is Outer Space Don’t Care About You, the 1st song; even though its only about a minute and 20 seconds long. Thats something to mention; this cd only runs about a shameful 25 minutes. But the cd has been recorded surprisingly well; give The Briefs a shot, if you like ska punk. I would also recommend getting this cd before the other briefs cds, to see if you like this one. You can listen to the whole cd, without skipping tracks.